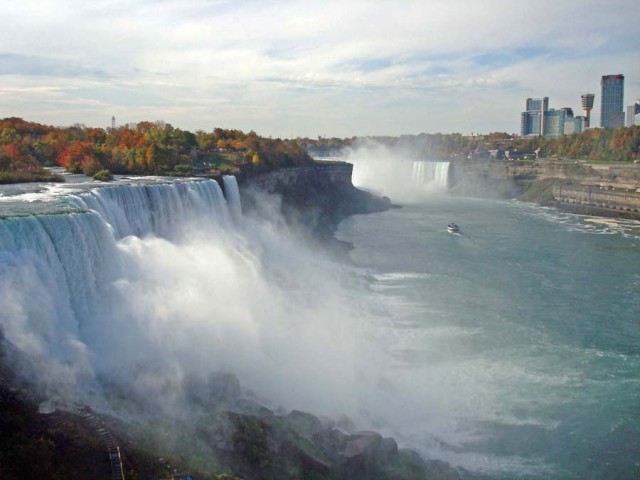 Crashing spectacularly over the Niagara Gorge astride the USA/Canada border, Niagara Falls may not be the world’s highest (that would be Venezuela’s Angel Falls) waterfall, nor its most voluminous (prize here goes to the Chutes de Khone in Laos). But all combined, the three falls that make up Niagara do have the world’s highest flow rate, and their mix of majesty, lore, and location has made them among the very most famous and visited, and for good reason.

Dating back 10,000 years, the falls and the two cities that grew up around them are located about a half hour north of the city of Buffalo, NY (which is linked via air and rail to various cities in the Northeast), some 90 minutes from Toronto.

If anyone recalls one of the eye-popping special-effects scenes in Pirates of the Caribbean: At World’s End, when the ship goes over a waterfall – well, that’s just one of the latest instances of Hollywood’s fascination with these falls, going back to the comedy Niagara Falls in 1941 and most famously including the 1953 noir thriller Niagara, which effectively launched the career of Marilyn Monroe; and more recent movies such as Superman II, Fever Pitch, and Tammy.

It was the Monroe flick that especially helped put the falls on the map as a tourist attraction in an even bigger way, although Niagara Falls honeymoons had already been popular with American and Canadians for generations. And today it remains a hugely popular draw with visitors from all over the world and every demographic. 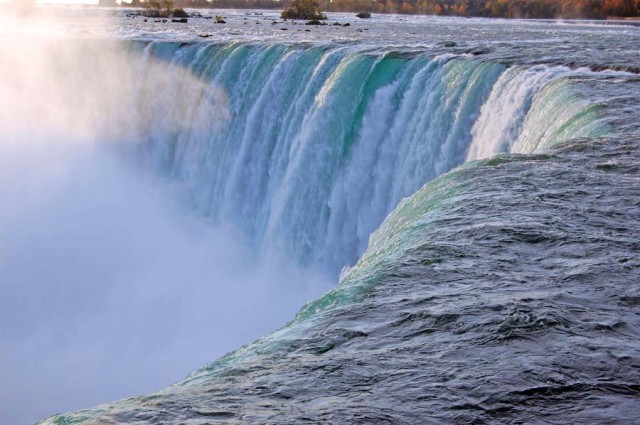 It’s thrilling enough to experience the falls in rather more conventional ways, fortunately. And if you’re going to make the journey up here, you’ll want to take advantage of all the offerings and views on both the U.S. and Canadian sides.

On the Canadian side, one of the classic musts is the overlook at the Horseshoe Falls on the Canadian side from Queen Victoria Park and Table Rock. On the U.S. side the views are less spectacular, but a couple of unique options make up for that: the Cave of the Winds, where visitors take an elevator down into the gorge to right behind/next to the Bridal Veil Falls. Then of course there’s the Maid of the Mist, the boat operation that takes you out into the river (post-fall, of course) to give you some eyepopping perspectives indeed (you’ll need to don a rather unstylish plastic poncho, however!).

And beyond the allure of the falls themselves, there are the cities, which have sprouted attractions to keep visitors entertained away from the spray (especially true for the Canadian side, with all manner of divertissements including casinos, shows, theatres, museums, and more).

Niagara Falls is a 7-hour drive from New York City and 8 1/2 from Chicago (the nearby city of Buffalo is also linked to both cities by train).