Old Africa hands consider Dakar one of the continent’s most hospitable and entertaining cities. Surprised? Senegal’s capital and its environs, where African meets French meets international, is full of cool attractions natural, historic, and modern, and its cultural scene one of Africa’s most vibrant.

The place to start any exploration of Dakar is its central hub, Place de l’Independence, normally in nonstop motion. Down the street you’ll find the large white city cathedral, flanked by a pair of towers and crowned by a great dome. Also nearby is the IFAN Museum of African Arts, one of West Africa’s oldest and most prestigious art and cultural museums, with a fascinating permanent collection of some 300 objects, the most striking and characteristic of which are the tribal masks from all parts of this corner of the continent. There’s much more besides, from drums to figures and other ritual and artistic objects.

It’s worth getting a snap or three of the seaside Presidential Palace and the curiously circular Post Office Building, then head a bit outside downtown to check out the Grand Mosque (most Senegalese are Muslim), inagurated in 1964 and designed/built in partnership with Morocco and an appearance along the lines of Casablanca’s Mohammed V Mosque (the view from the minaret is one of the best in town!).

A little farther afield in Hann Park in the eastern part of the city, the Parc Zoologique is a bt of a trip – dating from the 1930s, it’s seen little updating since then. Inmates include rare monkeys, antelopes, chimpanzees, hyenas, jackals, panthers, and leopards. You’re even allowed to feed the chimps fruit.

Also a bit farther out, on a hill in the Ouakam district, Dakar’s latest tourist attraction is the gigantic African Renaissance Monument, inaugurated in 2010. Depicting a minimally draped man, woman, and child in a heroic, almost socialist-realist pose, it has stirred up plenty of controversy, both because of its enormous expense in a poor country and its “immodesty” in the eyes of some Senegalese Muslims.

If you need a pick-me-up along the way, in Dakar snacks are sold on practically every corner, with a particularly good spot being Avénue Pompidou, lined with cafés as well as shops of various kinds. Speaking of shops, browsing for local crafts is a highly rewarding experience, especially at places like the Kermel, Sandaga, and HLM markets, Soumbe-Dionne Artisan Village, and various galleries around town.

Being on the Atlantic, Dakar and its nearby coast naturally also have beaches, although they’re a bit of a mixed bag, especially the ones right in the city.  Cape Skirring and elswhere in the extreme south of Senegal has some of Africa’s best beaches. In and around the capital, Bel-Air has its aficionados, but the best choices are in the other direction, not far from the airport, where beaches like Yoff (aka the Yoff Beach Breaks), Plage Monsieur “Ice” and N’gaparou (aka Ebony Beach) are great not just for swimming and sunning but for surfing and kitesurfing (various hotels and outfits rent equipment and offer instruction). The surfing is so gnarly hereabouts that many of the sport’s top figures show up regularly to practice and compete. 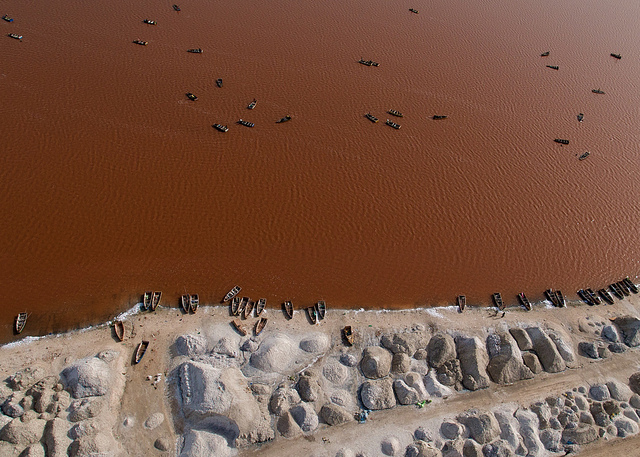 At night, another side of Dakar is very much worth exploring. You’ll hear music on the streets day and night – both performers and recordings playing in shops. But live venues worth checking out after dark include Club Thiossane, owned by Senegal’s most famous musician, Grammy-winning Youssou N’Dour (other clubs can come and go, so best to ask around once you’re here).

There are a number of fascinating day trips and overnights out of Dakar, as well. Two of the most interesting happen to also be the closest. Gorée Island (top), 3 kilometres (2 miles) offshore from the city (reachable by ferry, obviously) preserves the complex used to administer a sgnificant portion of the brutal West African slave trade; they say many were processed here through the “door of no return”, but historians remain divided on that, with some holding that Gorée may have been administration only. Regardless, the spooky buildings and museum of slavery here never fail to leave a strong impression on visitors, who have included presidents, popes, and prime ministers (there are a couple of other worthwhile museums on the island, one devoted to women in Senegal and the other to the sea in Senegalese culture).

For those with an eco bent, 30 km. (18 mi.) north of the city is astonishing Lake Retba (above). Astonishing because the waters of “Lac Rose” (Pink Lake) are in fact varying shades of reddish, depending on the strength of the sun (probably not worth visiting on a cloudy day). It’s due to a particular strain of algae, and the waters are also highly salinated – so you’re likely to see locals harvesting salt (you can also take a dip, said to be highly salubrious for body and soul). A nearby bonus is an area of dunes, where the landscape suddenly becomes a desert, with sand stretching as far as the eye can see. In fact, it can be so disconcerting and disorienting that a guided tour is probably the best way to go; that will allow you to better navigate this sandy expanse, from which you can contemplate the singular Lake Retba on one side and the Atlantic Ocean on the other.