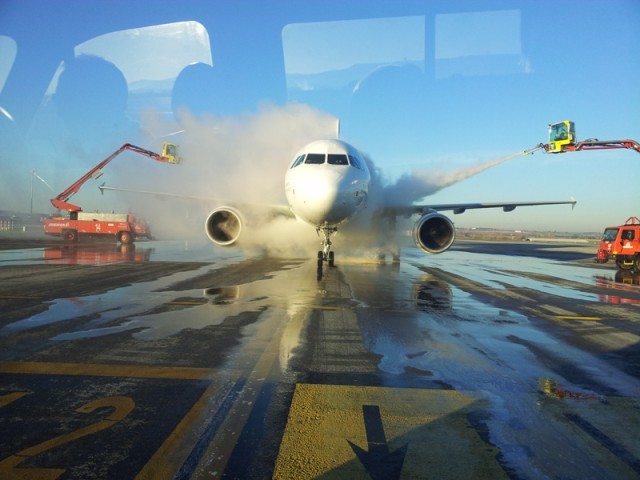 After a snowstorm the other night in Madrid, 70 aircraft were de-iced before proceeding to their scheduled flights – 35 percent more than the normal average this time of year. And our diligent de-icing crews performed a yeoman’s job in the crucial task of carefully eliminating any traces of snow, ice, and frost in order to ensure optimal flight safety. We did cover de-icing in this blog last winter, but we thought this season we’d share with you a more detailed description of this important process.

So why in fact is it necessary to de-ice aircraft in low temperatures before a flight?

As with cars, roads, and of course human beings, aircraft also can experience difficulties due to subfreezing temperatures, snow, and ice. These adverse weather conditions rarely impede regular flight operations at an airport that’s open, but they do need to be adressed so as to eliminate any potential issues with flight security.

OK, so what does the process consist of, and what do de-icing crews do?

A de-icing team is made up of a truck carrying 5,000 litres (1,100 gallons) of a water/antifreeze mix, as well as a boiler which heats this mixture to a whopping 82° Celsius (180° Fahrenheit), and pumps which pressurise the fluid so that when the operator opens the escape valve, it shoots out from the water cannon with the proper force.

In this way the technicians flush away any “contamination” (as they term it) from the fuselage. so that all surfaces are clean. Normally a solution of water and glycol (a clear liquid used in antifreeze solutions, in greater or lesser amounts, depending on the outside temperature), with an orange dye added to make it easier to visually verify what surface has been treated. The water dissolves the snow, ice, and frost, and the glycol prevents additional material from forming for a certain period of time.

What are the fuselage areas that need to be cleaned of snow and ice?

Several key areas include the vertical and horizontal areas of the wings and tail,  the radar dome, the landing gear doors, and the stabilisers. But in more extreme weather, virtually the entire fuselage must be treated in order to restore its full aerodynamic integrity.

De-icing is not automatic but rather done upon the request of the aircraft captain; if in his judgment it is necessary, he must seek authorisation from the control tower, then proceed to the base in order for the de-icing team to work its magic.

The de-icing process is done strictly by the book – namely the instructions contained in the manuals issued by the aircraft manufacturer, as well as regulations issued by  the Association of European Airlines and International Organisation for Standardisation, among other bodies.

How long does the process take?

It varies widely, depending on the extent of the surface covered, from as little as three minutes to more than an hour. If it’s a matter of only ice, it can take as few as three to five minutes; if there’s snow, as well, this can increase the time considerably (other factors influencing this include the amount and type of snow – powder, damp, frozen, etc. – and the size and model of aircraft).

What happens once the plane is in the air?

During flight, each aircraft’s own anti-ice systems ensure that any critical parts subject to ice accumulation remain clear and operative.

How many teams operate at Madrid-Barajas Airport?

There are two de-icing bases, one between runways 36L and 15R and the other between 36R and 15L, in both cases just 500 metres (1,640 feet) away from the head of the runway. Under normal circumstances, each of these bases can accommodate three aircraft for cleaning simultaneously.

At what times of day are aircraft usually de-iced?

Most de-icing occurs between 6 and 11 AM, though the bases are operational 24/7 if necessary.

How do we do it at Iberia?

As of February 2013, we have been using an innovative system of aircraft de-icing management which puts us on the cutting edge of providers of this specialised service. It’s a tool based on 3G mobile communications technology, not yet widespread among world airlines and airports.

De-icing equipment operators use a PDA to monitor the progress of each stage of the process, and supervisors use a tablet PC with all the information necessary to manage and control de-icing base operations in real time.

In addition, the Barajas control tower as well as the airport authority AENA and the Iberia command centre (from which we control all ground handling operations) have access to all the data generated with this tool. Among other advantages, this allows the tower controllers to interact in real time with the supervisor to better coordinate the entry and departure of aircraft from the de-icing bases, and facilitates the implementation of airport best practices even under adverse weather conditions.

Thanks to this system, an initiative of our Project Ágora, we have at our disposal all data concerning the operation in real time, which allows us to optimise the de-icing infrastructure and service, improving on-time performance and service to the airlines utilising the airport as well as their passengers.