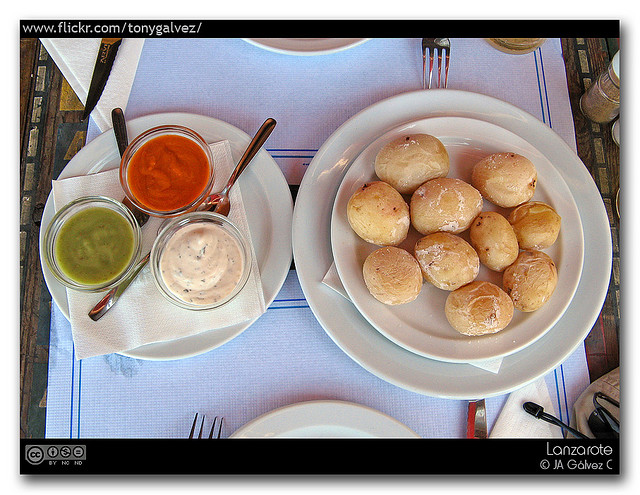 Not surprisingly, given its traditional isolation from the Iberian peninsula, Spain‘s Canary Islands have developed some distinct cultural traits – foremost among them culinary, melding mainland, Latin American (especially Venezuelan), pre-Hispanic, and African, many of them deploying ingredients unique to this archipelago.

The best known Canarian speciality is papas arrugadas (“wrinkled potatoes”), cooked in salty water and served with mojo picón, an olive-oil-based dressing with a bit of a bite, thanks to garlic, red pepper, and chili pepper. Seems simple enough, but many chefs and cooks jealously guard special recipes which give this classic a unique twist or a contemporary update.

Almost as famous is gofio, an ancient dish which was a staple of the ethnically Berber Guanche peoples who inhabited the Canaries before the arrival of Spaniards in the 14th century. It’s a blend of wheat flour, millet, barley, and other toasted grains, and has been adapted in numerous ways, such as pelotas de gofio, ball-shaped and a common accompaniment to various dishes such as morcillas dulces (sausages made from pig’s blood, sugar, almonds, and raisins), stews, flans, or even just a cup of coffee.

Actually, until not too long ago, gofio was considered a nutritious but fairly pedestrian – and essentially low-class – food, associated with the poverty and difficulties of the years following the Spanish Civil War. But these days, it’s a whole other bushel of wheat. Chef Jesús González of El Duende restaurant in Puerto de la Cruz, Tenerife, is one of the islands’ premier culinary innovators, and says that in recent years there has been a movement to reclaim and update these humble traditional foods.

Other Canarian comfort foods include grilled corn cob, fish stew, sancocho (boiled salted fish, usually (usually Atlantic wreckfish, sea bass, or gruntfish) accompanied with the aforementioned wrinkled potatoes, sweet potatoes, and/or mojo picón; out in the Atlantic as they are, it’s hardly surprising that the islands’ cookery is big on fish.

Also big is are fruits, first and foremost the banana, eaten in various forms as well as fried. Others include mangos, papayas, guavas, avocados, and tomatoes.

Finally, let’s not forget the tipples. Though Spain is increasingly known for its wine, the Canary Islands – well, not so much. Yet vino goes back centuries here; Shakespeare loved the sweet, fortified Malvasía (Malmsey) and even praised it in Henry IV.  The reds of Taraconte on Tenerife also have a great reputation. Even stronger island specialities include banana and honey rum liqueurs.

All in all, certainly a tasty legacy worth toasting.