Amsterdam is justly celebrated for, among other things, its canals. But if any Dutch canal city (and there are quite a few) can lay claim to being even more picture-postcard-perfect, it’s Delft, about an hour’s drive away.

The city’s canal heritage, dating back to its rural-village origins in the early 12th century, is embedded in its very name (derived from delven, Dutch for “digging”), and visitors to its historic centre are invariably charmed by the mix of waterways, bridges across them, and canal houses lining them – a mix with an even cosier, more intimate feel than Amsterdam’s.

The old town’s main square, the Markt, is unsurprisingly the site of the Renaissance-style Stadhuis (city hall), and across from it, the Nieuwe Kerk, which despite its designation of “new” dates is actually pretty old – completed in 1496; it’s especially notable for its belltower and its status as the final resting place for members of the Dutch royal family (including, most recently, the late Queen Juliana). The Gothic Oude Kerk (old church) not far away is even older (1246) and features a central red-brick towner that leans noticeably, its most famous dead denizen is the 17th-century Dutch master painter Johannes Vermeer.

In Delft, Orange is not only the new black but was always a big deal. Another must-visit connected with the royal House of Orange is the Prinsenhof (Prince’s Court), a onetime mediaeval monastery used by a seminal figure in Dutch history, William of Orange, as a residence in the 16th century – and famously where he was assassinated – is today a museum with both Dutch history exhibits and lots of beautiful period furniture, paintings, tapestries, and suchlike.

Vermeer is another historic figure with whom the city is associated, and if you’re a fine arts buff, this alone would be reason to make the pilgrimage here. Ground zero is a fine, well curated Vermeer Centre which explores the painter’s life, times, and oevre. 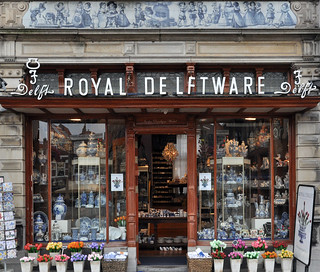 Last but not least, the city famously lends its name to that the distinctive blue-and-white ceramics known as Delftware. You can check out the history and a marvelous collection of tilework and porcelain pieces dating to the 16th century at in a 19th-century townhouse turned into the Museum Lambert van Meerten, and tour the 17th-century Royal Delft factory for a look at the production process itself. Both here and all around town, you’ll have plenty of opportunity to spend time shopping for all manner of these classic items, both decorative and utilitarian.

And of course don’t forget a canal cruise! Quite a few visitors come to Delft as a side trip from Amsterdam, but it is really worth staying a night to experience the magic of the canals and the old town illuminated at night.


Best Iberia fares to Amsterdam from the U.S., from Spain.