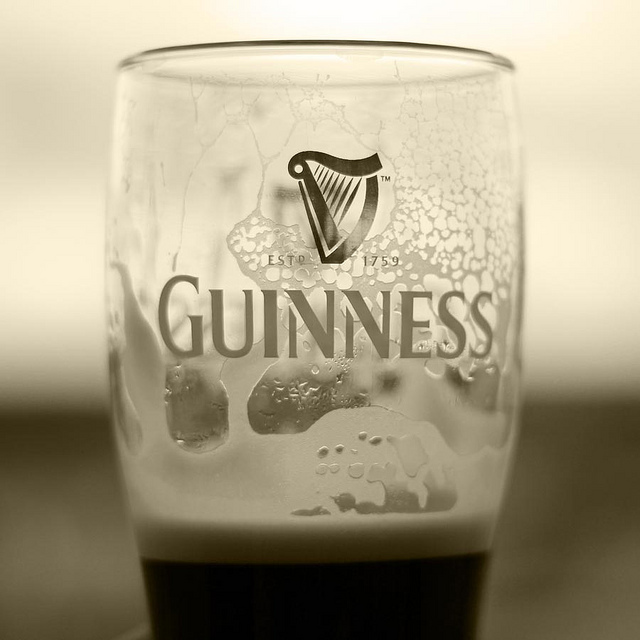 The tap opens and out it pours, with all the excited little bubbles coursing to the surface and the spongy-looking white foam threatening to overflow the glass. You bring it to the lips and take a sip neither too dip nor too dainty. Have a chat with your neighbor and take another sip. Hmm, drained the glass already, did you? Uh-oh. Guinness has worked its dark magic upon you: you’ll want another, and then another. You’re a goner.

Not merely one of the world’s best beers (as well as the world’s top-selling dark beer), Guinness is for many a way of life. It was born, bred, and continues to be an integral part of the culture of Dublin, but it has by now become Ireland’s number-one international ambassador, a worldwide phenomenon with millions of thirsty fans from Calais to Kuala Lumpur. It’s Ireland’s capital, though, that is the proud home to the Guinness Storehouse, the world’s only museum devoted to this chewy brew, marking its 10th anniversary this year – and it makes for a fascinating visit (not to mention a tasty one, with each visit ending with a tasting).

Here in Dublin, not just the pubs smell like Guinness, but in some parts of town, so do the very streets. The brewery at St. Jame’s Gate, just minutes from central Dublin, is a relatively nondescript red-brick edifice builit in 1904 – indistinguishable from scores of others throughout the city. The building’s main section, however, has the shape of a giant pint, rising toward the Gravity Bar, a “pint” that if full would contain some 14.3 million actual pints. The brewery produces 3 million pints daily and has been in business since 1759 – when Arthur Guinness acquired it by signing a lease for 9,000 years.

Visiting the facility costs 16.20 euros (if you buy online ahead of time), which includes a pint of Guinness in the bar which crowns the building. On the ground floor is an exhibition about the brewing process. Upper floors cover other aspects such as historical publicity campaigns, history of alcohol consumption, and history of the building itself. Near the end of the tour visitors are taught how to pull a pint and awarded a certificate to certify their new ability.

The Storehouse is also home to the Source Bar and the Brewery Bar, which specialise in typical Irish dishes made with Guinness (top picks include hearty beef stew with black bread and mashed potatoes).

Then, arriving at the top o’ the pint, the part that would be the foam, you find a glass dome which offers some of the best views of Dublin available while you sip your real suds and try to spot the little St. Patrick statue out on the green dome of an old mill.

As they say in the Oud Sod, sláinte!