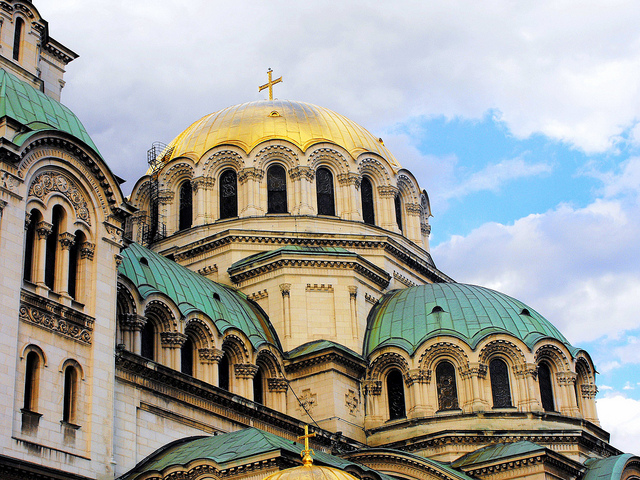 Before the Berlin Wall came down, Bulgaria for Westerners was tucked even farther than most behind the old Iron Curtain. Today the differences are truly astonishing to see: a country vibrant with energy – though obviously not without its problems. And its capital Sofia – with a population of 1.2 million, yet fairly accessible (and bargain priced!) for the visitor – is the place where this energy is especially showcased (though it’s often bypassed by visitors who head right for other parts of the country like the Black Sea coastal resorts in places like Varna and Bourgas).

A day experiencing Sofia at one of the many cafés in city centre should start with breakfast including banitsa, a cheesy phyllo-dough concoction, and ayran, a yogurt drink that like many other things here is a legacy of the Turks. Once properly fueled and ready to go, find the Serdika Metro station in the heart of the city; right nearby you’ll see 21-metre-high statue of St. Sophia, the city’s patron saint, where a Lenin statue once stood – erected in 2009 to symbolise the country’s new era.

Also right nearby, you should have a look at the round red-brick Church of Sveti Georgi, which is the city’s oldest extant structure, built by the Romans in the 4th century, and catch the hourly changing of the guard in front of the presidential palace.  Right alongside it is the National Archaeological Museum, covering the region from tribal prehistory through the 18th century, and the former Communist Party Headquarters, a Stalin-era remnant still used for government offices.

Before you know it, it’s lunchtime, and there are restaurants, or there’s the Halite, the Market Hall,  a gracious 1911 neo-Renaissance structure which includes a variety of merchandise and food offerings both Bulgarian and international, as well as a great chance to watch the locals in action and snag some colourful photo ops.

The city’s long, rich religious heritage also provides much of its allure, architecturally and culturally – and not just in terms of majority Bulgarian Orthodoxy. Yes, the enormous, neo-Byzantine Alexander Nevski Cathedral (completed 1912) is the biggest deal in town (indeed it’s one of the largest Orthodox churches anywhere in the world), but there are also impressive temples of other faiths, as well, such as the Moorish-flavoured, als0 early 20th-century, Sofia Synagogue (which includes a Jewish history museum), and the red-brick Banya Bashi Mosque, built in 1576 during Ottoman Turkish rule.

Sofia is a city of green spaces as well, and one of the best places to experience this is huge Borisova Gradina Park, whereas for modern hustle and bustle, check out Vitosha Boulevard, the city’s main commercial high street named after the nearby mountain and now home to outlets of the usual international brands (it’s now undergoing a bit of a facelift to add some retro elegance such as Art Nouveau-style kiosks and street lights, as well as green areas, fountains, and outdoors bars).

Seeing how far this fair city has come, Communist Party boss Todor Zhivkov must be rolling in his grave…