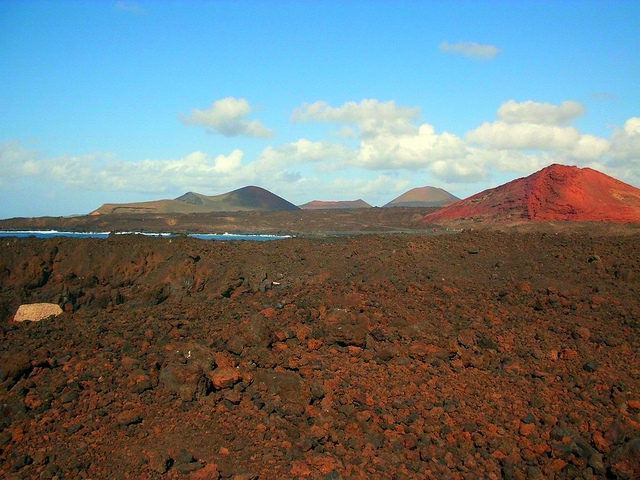 In the olden days (and even days not so olden), doctors used to prescribe travel to certain climates to patients to cure all manner of ailments. On Lanzarote in the 21st century, Spain has  come up with a volcanic equivalent, also calling out to lovers of beaches and surfing in a way that elsewhere in Europe and the hemisphere is hard-pressed to match. Nature-lovers, too – the entirety of the fourth largest of the Canary Islands (846 square kilometres/327 square miles) has been declared a UNESCO biosphere reserve.

Timanfaya National Park is 51 square kilometres (20 square miles) of dramatic red-, black-, and ocre-hued lands crammed with nearly 30 volcanic cones and fissures that endow them with a special magic. It was all formed relatively recently (in the 18th century) by an impressive eruption which sent a huge flame up over this patch of the Atlantic off the coast of Africa. From the top of Mount Timanfaya you can truly appreciate how otherworldly this terrain looks. You’ll also want to pay a visit to Tremesana and Corazoncillo volcanoes, as well as the Mount Rajada lookout, 350 metres (1,148 feet) up.

Meanwhile, to really get a taste of the heat generated by Lanzarote’s vulcanism, head to the islet of Hilario, where at just 10 metres (33 feet) undergound it hits 600 degrees Celsius (1,112° Fahrenheit). It’s a trip to experience the geysers here, as well as dine at the restaurant El Diablo (“The Devil”), designed by the legendary and iconic local artist/architect César Manrique.

Manrique’s is a key name you’ll see all over the island, in fact, as well as throughout the Canaries in general. But ground zero, as it were, is the César Manrique Foundation, in the town of Tahiche, a bit inland from the southeast coast’s Costa Teguise. Here you can learn more about not just this influential 20th-century figure (1919-1992) but also see view his art collection, including works by Picasso, Miró and Chillida. I’d also highly recommend getting up to the north coast for a look at another of his seminal works, the Mirador del Río, a lookout (and restaurant attached) with a n absolutely spectacular view like few others you’ve ever seen).

Another key stop on the Manrique trail is Jameos del Agua (above), a complex of caves connected to Corona Volcano, including, in the Cueva de los Verdes, a  concert hall with absolutely incredible acoustics. At the same time, another part of this system is home to a blind crab endemic and unique to this island, highly sensitive to sound.

It’s a good example of the Lanzarote dichotomy: you can find some amount of “action” if you want it, but the essence of the island is its laid-back, natural, rugged, somewhat off-the-beaten-path feel.

The main population centre is the city of Arrecife, its population of 50,000 a good percentage of the island’s total, but the pace here remains slow; other resort areas and towns include the aforementioned Costa Teguise as well as Yaiza, Playa Blanca, and the busiest resort, Puerto del Carmen. But again, if you’re looking to party your bum off, this is probably not be your spot. For the land of fire and nice holds other allures.

The arid subtropical climate is characterised by scant rainfall but is moderated by the surrounding Atlanti Ocean, yielding a minimum average winter tempaerature in January of 17 degrees Celsius (63° Fahrenheit) and an August average of 24° C (75° F).