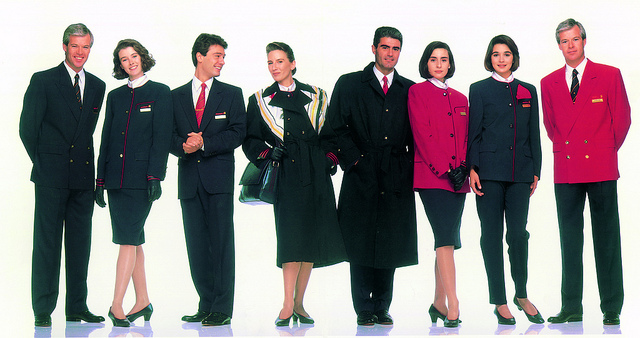 Seventh in a series (for the rest, see links below)

In 1989, Iberia management decided that not only was it time to update the flight crew uniform, but also to change the designer. Elio Berhanyer had served with great distinction but had been in the job since 1972. So a competition was organised between Spain’s top designers of the day, keeping in mind the airline’s corporate concept, its future goals, and with an eye toward staying relavant and usable for at least five to seven years.

It finally boiled down to a duel between Alfredo Caral and Rafael Tejada, in which Caral persevered after going into seclusion with his design team on the island of Minorca to complete the project; the production contract went to the Cortefiel company.

Alfredo Caral had a clear idea of what Iberia was looking for, and how to balance fashion and functionality, with the use of institutional colours. Highly organised, he presented a lineup covering garments for each season, including technical specifications and details of colours and textiles for each model and item. In this way it was much easier to modify any detail.

Caral grasped immediately the concept of uniformity that Iberia was seeking, and so in putting together his designs what guided him were: 1. fabrics that were adaptable to any time of year, such as cool wool, and 2. equal weight given to aesthetics and practicality.

Once again, the prevailing colour this time around ended up being blue – more specifically ultramarine, matched with the corporate reds and ocres of Iberia. The skirt suits and trousers were once again the key items, and the accessories rotated depending on the season. Another small but significant novelty: all uniforms included in a visible spot the employee’s name and position.

Like Berhanyer before him, Caral would have a long tenure as Iberia’s official designer – in his case, a 16-year-run, lasting till 2005.

Andalusian Alfredo Caral originally wanted to study architecture and psychology. But it can be said that a fashion designer employs both disciplines, so in a sense those interests were served after all. Certainly he discovered his passion for fashion early on, drawing designs instinctively, and realising how similar they were to those of the French designers of the day or those which appeared in the pages of Life magazine. These days he has moved on to perfumes and beauty products, and is the head of a Murcia-based cosmetics company.