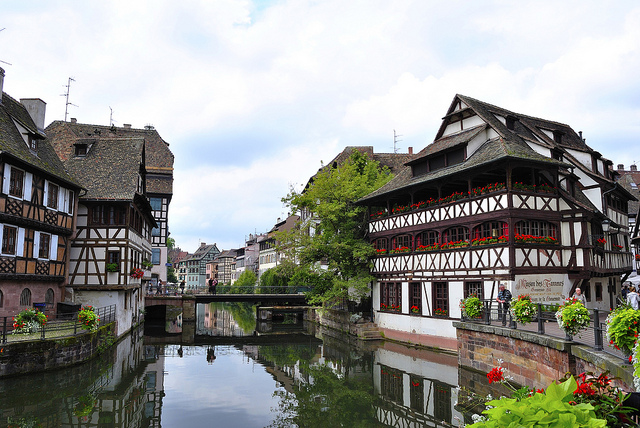 The half-timbered, flower-festooned houses are like something right out of les Frères Grimm – except for the blue-and-gold European Union flags waving from the balconies. The EU may be going through its challenges at the moment, but here in Strasbourg, capital of Teutonic-flavoured Alsace-Lorraine, Europe is always in fashion, as the European Parliament and the Council of Europe are among the 20 international institutions based here.

But lest you think this has become just another urban nest of bureaucracy, rest assured, Strasbourg remains a city of personality, reflecting a long and distinguished history (which included, of course, long periods both under German imperial rule and as an independent German-speaking city). You’ll feel it immediately once you start exploring. The historic centre is medieval Grande Île, a UNESCO World Heritage Site island in the middle of the Ill River (yes, that’s its name, not its state of health). Here you’ll find one of the city’s premier plazas, Place Kléber, as well as its exquisite 15th-century Gothic cathedral (climb the 329 steps of its tower for some truly breathtaking views out over the city and beyond, all the way out to the Black Forest); this is also one of the central points for one of Europe’s most charming annual Christmas markets.

Across from the cathedral is the Maison Kammerzell, a 15th-century, multi-storey wooden house which is the city’s most famous and is now a hotel and a restaurant serving traditional Alsatian cuisine. Other landmarks include the 19th-century neoclassical Ópera National du Rhin on Place Broglie and the Rohan Palace, which includes three museums, the most interesting of which is the Musée des Beaux Arts, with works of masters such as Van Dyck, Canaletto, El Greco, Goya, and Delacroix.

You’ll definitely want to head, too, to the Place Gutenberg and the fashionable Krutenau neighbourhood, with its art galleries, clothing boutiques, pubs, and restaurants, where you can have a good feed of local specialities (shared with Switzerland, Alsace’s neighbour to the south) such as fondue, raclette, and spätzle.

There are a trio of other districts that pretty much encapsulate what Strasbourg is all about. One is Petite-France, a canal-crossed section of the medieval Grand Île, where you’ll want to have a seat at one of the delightful sidewalk cafés. The Teutonic side, meanwhile, is best exemplified by the Quartier Imperial, where you’ll find the monumental architecture dating from the rule of 19th-century Prussia, such as the Place de la République; the grand, neo-Renaissance Palais du Rhin; the University of Strasbourg; and the Théâtre National.

The city’s most recent, transnational incarnation is found in its Eurodistrict, with institutions such as the EU Parliament, the European Court of Human Rights, the Council of Europe, the European Science Foundation, and various others. Modern architecture buffs will want to put this area on their list (along with, by the way, an extremely cool bit of business by distinguished Iraqi-British architect Zaha Hadid, the Hoenheim-Nord Terminus and Car Park).

For a dose of evening culture, check out music, dance, and other stage performances at L’Aubette in Place Kléber, an 18th-century building which besides a gallery of elegant boutiques and restaurants also houses Aubette 1928, a four-storey space which both displays history from the avant-garde Roaring Twenties as well as art and from then up to the present day. Then afterwards, time for some pub-hopping to enjoy some of the excellent local bière (the top name both here and in France being Kronenbourg, marking its 350th anniversary in 2014; you can also arrange a visit to the brewery on the outskirts of the city). And for that, you’ll definitely want to be able to toast bilingually in French (santé!) and German (prost!).