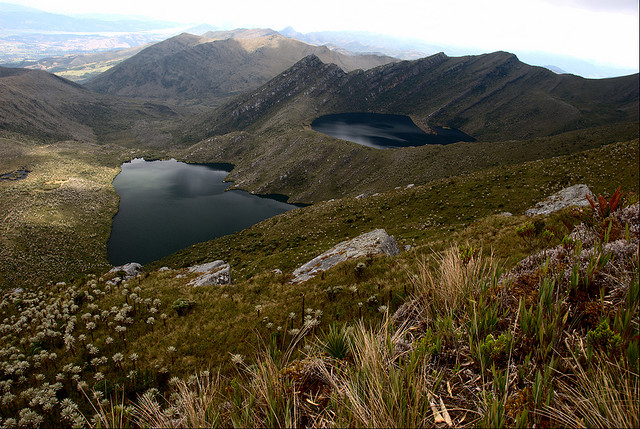 Compelling as Colombia’s capital is, it’s also well worth getting out of town for a day or two, and there are a number of nearby spots to get a bit more of a taste of Colombia’s natural and historic riches.

Chingaza National Park  Bogota residents dub it “the water factory”, as its lakes and reservoirs are the source of some 80 percent of the capital’s drinking water. A bit more than an hour outside the city, in the misty heights of an eastern corner of the Andes, this lovely area is ideal for hiking, with its moors, Andean forestlands, and Siecha and Chingaza lagoons, glacial in origin. This mysterious landscape is populated with equally exotic fauna such as spectacled bears and tapirs. And then there are the frailejones, strange woody plants which grow in dense spirals.

Guatavita Lake  Located 75 kilometres (45 miles) outside Bogota, this body of water was sacred to the pre-Columbian Muisca peoples, who in venerating Chie, goddess of the waters, gave rise to the legend of El Dorado. When the the Spanish conquistadors arrived in the 16th century they were fascinated with the ceremony they observed: the local cacique (chief) would go out on the lagoon on a gold-covered raft laden with treasure which would be dropped overboard as an offering. The Spaniards of course did their best to retrieve this gold – even starting to drain the lagoon (this proved too great a challenge to carry through to the end, but they did get a portion of the booty). Nearby is the quiet, handsome village of Guatavita, with its white facades, ceramic tiles roofs, and artisans shops,  a replacement for the original which was flooded by the construction of the Tominé Reservoir in 1967.

Zipaquirá Sal Cathedral   Both solemn and magical, known for deatures such as its blue dome and “water mirror”, this cathedral carved out of a centuries-old salt mine is the successor to one originally created by miners in the 1930s. No longer a mine, the space 180 metres (590 feet) underground is now a tourist attraction, part of a “salt park” dedicated to mining and geology. One realy cool thing to do here is take the “miners’ route”, where visitors get a taste of what it was like to work these underground tunnels in the old days – feeling their way through dark, narrow passageways, picking at the rock, and placing (fake) explosives in order to get at veins of salt.  Both educational and fun.

Bogota and its environs are on the cool side, with a median temperature of 15° Celsius (59° Fahrenheit) year round, though the weather can be unpredictable. In winter and first thing in the morning it can drop as low as -9°C (16°F).

The currency is the Colombian peso.

Best Iberia flight deals from Spain, from the UK.