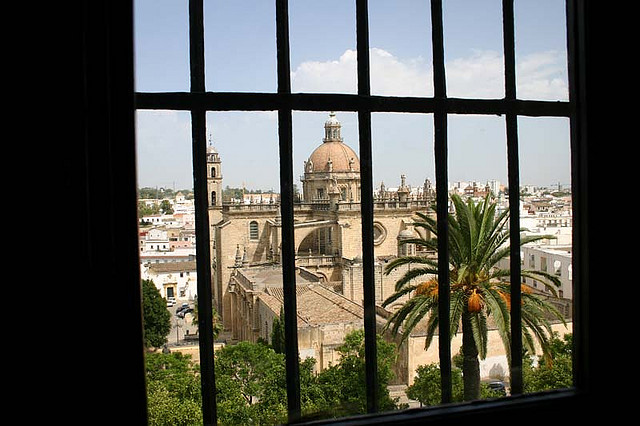 Many visitors to Andalusia understandably head first and foremost to the likes of Seville, Granada, Cordoba, and the Costa del Sol. But out west is another, just as authentic and wonderful side of this region, a land of flamenco and sherry, and of Moorish heritage as well. This is the proud, historic province of Cadiz.

The region’s airport is located in Jerez de la Frontera (the largest city, top) with more than 200,000 inhabitants), where the iconic Osborne Bull billboard silhouette (right) awaits arrivals. This is a symbol for the land of sherry (an anglicisation of the word Jerez, in fact) from dry to sweet, which you can sample in more than 30 bodegas (wineries), such as Tío Pepe and Álvaro Domecq. Then of course there’s Harvey’s, too!

Another very proud Jerez tradition is flamenco. The two best places to go are the Santiago and San Miguel neighbourhoods, the former being where legendary figures of the genre José Mercé and El Capullo were born. At first glance it appears that nothing is going on amid these quiet alleyways and peaceful limestone plazas. But you’ll soon come across the Andalusian Flamenco Centre and El Arriate, an old-fashioned spot with a cardboard cutout of Lola Flores, photos of Louis Armstrong, and impromptu singing. Don’t forget to order a dry sherry like Pedro Ximénez or a sweet wine to start off the evening. When you’re in San Miguel, head to La Faraona or La Paquera, two famous flamenco venues where you’ll feel the spirit of legends like Los Cernicalos and Tio José de Paula oozing through the walls. You’ll be greeted with full-swing machine-gun kicking and Andalusian songs, and you’re guaranteed to be swept up in the heat of the moment.  (For more on flamenco, click here.)

Elsewhere in Jerez, orange trees line the way to the 12th-century Moorish castle, where you can visit the mosque, the minaret, the baths and the Andalusian gardens. Just a few steps below, you’ll find the enormous cathedral, a mixture of Gothic, Baroque and Neoclassical. Other highlights: the Renaissance Cabildo Plaza, one of three classic La Rosa de Oro bakeries (sample a typical tarta de Jerez, made according to a traditional recipe with raisins, almonds and 37 spices), and Bar Juanito (fried fish, liver with sherry, shredded meat and cabbage that will truly tickle your taste buds). To round off this tour of this showcase city, head to the Royal Andalusian School of Equestrian Art, which showcases some of the world’s most beautiful and famous purebred horses.

Cadiz: Carnaval and the Sea

Just a half hour’s drive away, the provincial capital Cadiz made history in 1812 as the port city where Spain’s first constitution was promulgated. You’ll see the enormous commemorative monument next to the Provincial Palace and San Felipe Neri Chapel, where it took place. Music and murmurings will accompany you as you stroll through the Apodaca Alameda and the Genoese Park; the popular beach of La Caleta between two castles; the Gran Teatro Falla, the theatre where many of the competitions of the famous annual Cadiz Carnaval are held; and the Cathedral, with its distinctive yellow dome.

As you stroll, be sure to look up, as there are many lookout towers that were used by merchants to spot ships in the 18th century, when the city was the port of exit and entry to and from the American colonies. Discover vestiges of ancient Phoenician settlement at the Provincial Museum, and of ancient Rome at the ruins of theatre (left) in El Pópulo neighbourhood, the city’s oldest, and these days invigorated as a hangout of the city’s young people.

You shouldn’t leave town without getting a good eyeful of the glorious orange sunsets along the coast between Conil and Tarifa, where you’ll also find clusters of charming Moorish villages, sand dunes, and brilliant azure seas. Not for nothing do they call this the Costa de la Luz, the Coast of Light.