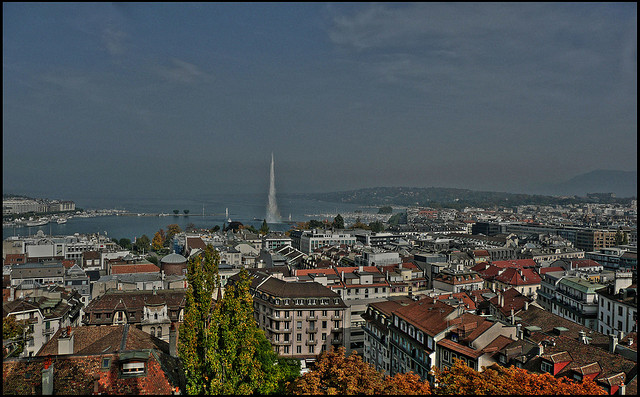 Geneva, Switzerland is in many ways an astounding city, with its restaurants offering lunch menus for 50 Euros; traffic of Ferraris and Aston Martins that puts Arab sheikhs to shame; businessmen closing multi-million deals behind gleaming office windows; watch brands such as Patek Philippe that most of us only see in magazines; perfectly dressed UN (and other global agency) officials that influence the planet’s fate and bankers surrounded by their bootlicking acolytes…  That colours a lot of the atmosphere here: hyperbolic and hypercapitalist.

Luckily, that’s not all there is. Geneva’s medieval Old Town is a breath of fresh air from this kind of ostentation. The warren of cobblestone streets starts on the other side of the Rhone River. Take a stroll over to the Town Hall and its courtyard, the Geneva Historical Society, a 17th-century Tuscan-inspired mansion that’s the city’s pearl, and the 16th-century Maison Tavel, the city’s oldest remaning building. The International Museum of the Reformation is also here, a fascinating place to delve into the monumental event that split Christendom and forever altered world history.

Head to St. Pierre Cathedral to see the chair belonging to John Calvin, one of the key players in the Protestant Reformation. Place Bourg de Four was the centre of the old city and Roman forum (it became Roman Genava in 121 BC). Pay attention to the two parts that are clearly different from the rest of the buildings: these were added halfway through the 16th century to house those fleeing persecution during the counter-reformation.

Today there remains nary an ounce of religious dogma hereabouts – nor, for that matter, much of anything in the way of food for the soul. Mammon is firmly in the driver’s seat these days, and Rue du Rhône is its local golden mile, lined with all the big fashion and jewellery names. Every few metres, you’ll come across passages, small, luxurious galleries with price tags that might make you feel faint.

Head to Place Neuve and take photos of the Opera House and Conservatory, and don’t miss a visit to Carouge, a delightful neighbourhood filled with artisanal shops, but be warned: the prices in the bakeries and cafés are on a par with those in the rest of the city. But if you’re a chocolate-lover, you’re in luck – this town is on a par with Brussels when it comes to the sweet stuff.  One shop in particular, Chocolats Rohr in Place Mollard, is awash in truffles, cocoa-covered almonds and other tempting treats. In the Old Town, don’t miss a classic meal of Swiss fondue at the equally classic, historic hotel/restaurant Les Armures.

Bring a picnic to the shore of Lake Geneva and watch the swans swimming and the water jet from the enormous fountain in the middle. At night, look for little bistros and brasseries (on Rue Basses, for example), as their prices are usually much more affordable and the atmosphere much more relaxed. This is not a hard-partying town at night, so it’s a great place to get your mellow on.

[And for more Switzerland, check this blog’s recent post on Zurich]

(For the following video, be sure to click on the subtitles!)