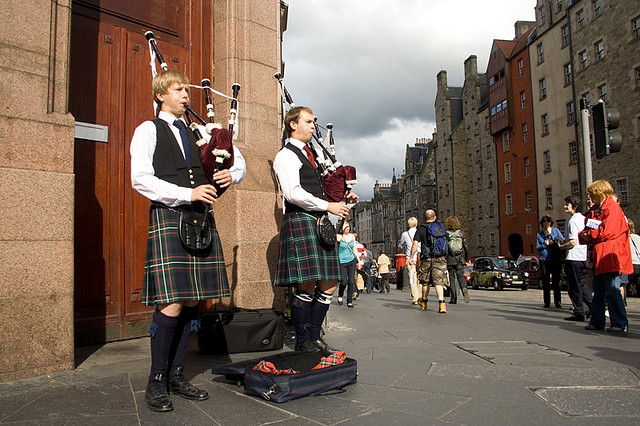 One glance up Princess Street is enough to give anyone a boost. Blokes in kilts play the bagpipes alongside businessmen; locals take their dogs out for a stroll; groups of lads hang out downing pints of beer; and thousands of tourists peruse the shops. The main street in the centre of Edinburgh is quite smart, as are many parts of the downtown.

Though Scottish politicians may be currently locking horns with the mandarins in London over the question of independence (to be voted on here September 18), the atmosphere in Scotland‘s capital (which is admittedly of a much more bearable in size and less stressful in feel than its counterpart on the Thames) is lighthearted, sometimes almost giddy, especially in now the summertime, when the locals truly relish the fine weather and festivals are in full swing, like August’s Edinburgh International Festival and Edinburgh Festival Fringe.

Visitors might want to take it from the top – literally, with the city’s emblematic and highly impressive castle, built on a cliff accessed by going up Castlehill. Don’t miss the “One O’clock Gun”, the cannon that is fired daily at – why, yes, 1pm. The crown jewels reflect their past splendour and the Stone of Destiny symbolises the old Scottish monarchy. The rooms in the Royal Palace and the National War Museum, displaying soldiers’ letters and armour among other things, reflect the rich past of the nation that now sets more stock in the riches off its shores – black gold aka petroleum.

It’s here in Edinburgh that the Scottish mile (1814.2 metres) originates – which is the exact length of the Royal Mile, the city’s other famous street that boasts an abundance of alleyways such as Mary King’s Close as well as medieval courtyards. At Lawnmarket you’ll find The Hub, the church that’s now the venue for the Edinburgh Festival. Don’t miss a visit to Gladstone’s Land, the 16th-century house-museum of period life, as well as St. Giles Cathedral, named after the patron saint of lepers. The latter’s Thistle Chapel warrants a moment of contemplation as you marvel at the cherubs painted on the ceiling (one of which appears to be playing the bagpipes). The avant-garde Scottish Parliament was designed by the late Catalan architect Enric Miralles and contrasts strikingly with its dark stone surroundings. Holyroodhouse Palace reflects the power of the British monarchy, serving as the official Edinburgh residence of the Queen. The Scottish National Gallery houses works by Velázquez, Gauguin, Titian, Botticelli, and Raphael. That’s a lot of ground covered already, so take a load off on a bench at the vast meadows of Princess Street Gardens.

The North Bridge and the houses in the Old Town are stunning. For more pastoral surroundings, Dean Village is a picture-perfect little town that’s still part of the city, where you’ll see a river (called the Water of Leith), bridges and stone houses. Then why not relax on Edinburgh beach? Yes, beach. It’s in the Portobello neighbourhood, a bit outside the city centre, and it’s a great way to cool off and sample some fish and chips.

If you are looking for something even a bit more traditional, head to any pub and have a go at its haggis, a dish made with oatmeal, spices, and, well, sheep organs, cooked in a sheep’s stomach (it tastes much better than it sounds). If you can’t quite bring yourself to go that far, do at least pop around to one for a pint, a dram, or a coffee. Two very popular establishments are Black Medicine (Marchmont Road, 108) and Elephant House (George IV Bridge, 21), known for being the place where J.K. Rowling sat writing the Harry Potter novels. If weather permits, find a seat at one of The Grassmarket’s restaurant terraces.

Last, but oh so definitely not least, is the emblematic Scottish whisky. The Scotch Whisky Experience is a museum that demonstrates how it’s produced, displays antique bottles, and offers a tasting session. And after that, you’re bound to want to head to the nearest pub to continue the experience. And as the Scots say, “slainte mhath!” (to your health!).