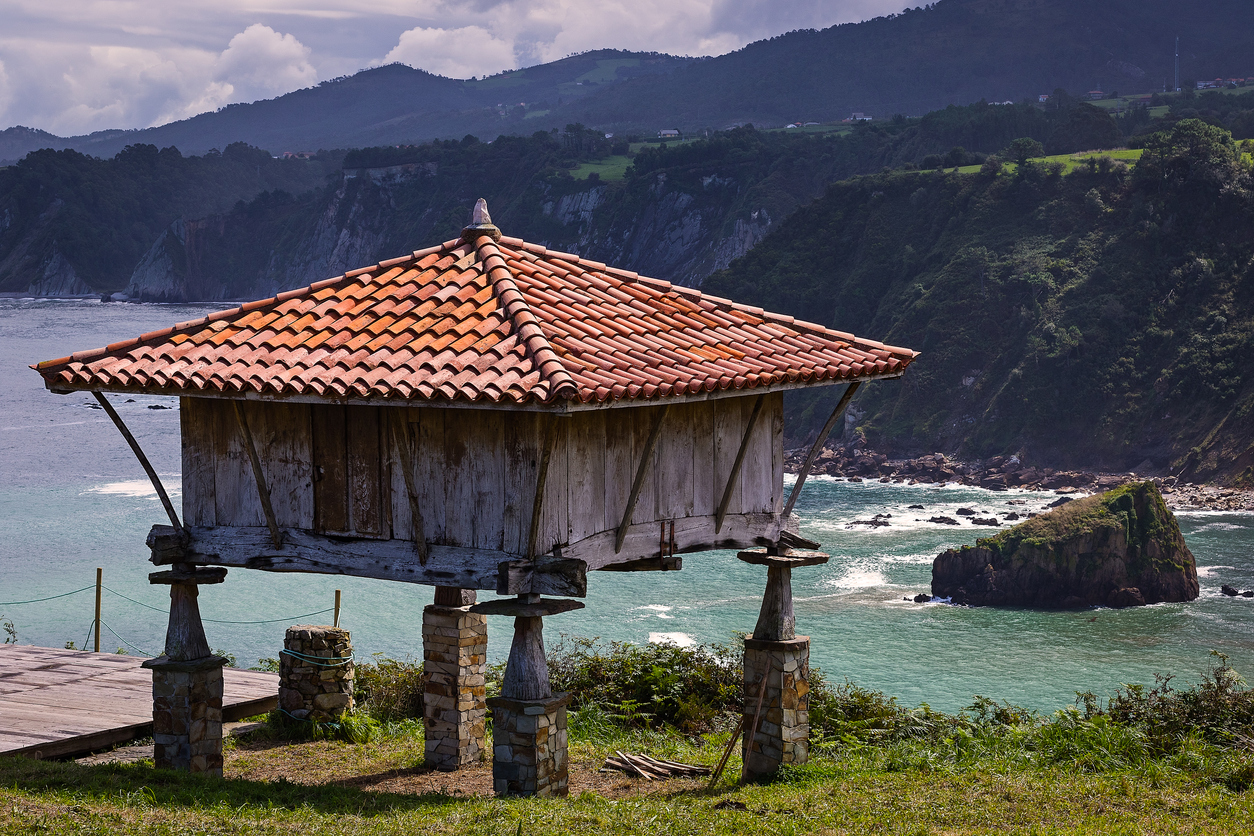 Cliffs plummet dramatically to beaches and crashing surf. Lush green hills rise and fall, then keep rising until they swell into the craggy, majestic Picos de Europa range. In the compact principality of Asturias, roughly halfway along Spain‘s north coast, nature is front and centre. There are several good-size cities here, for sure. But the flavour of this land is bucolic and small-town, with picture-postcard views almost everywhere you look. It is not what most anyone would think of as “typical” Spain, but it’s a place I absolutely never tire of visiting.

That flavour is one reason I think of it as Spain’s answer to Wales. Another is the fact that for historic reasons it’s officially a principality, and just as Charles is Prince of Wales, the heir apparent to Spain’s monarch is the Prince (or now, Princess) of Asturias. And there are even more reasons, as will become evident below.

There are two distinct sides to Asturias: its rolling hinterland and its craggy coast, dotted with impossibly picturesque villages and towns. Top of many people’s beauty list would be Cudillero (or Cuideiru, in the local variant of Spanish, called Bable or Asturianu), climbing a coastal hillside with a jumble of colourful houses, with delightful waterside seafood restaurants. Farther east, handsome Llanes is ready for its close-up, offers the chance to tour its cinematographic route of spots where the likes of the movie thriller The Orphanage and the Spanish TV drama La Señora were filmed. Ribadesella features a lovely river of the same name and palatial manses built by indianos, locals who made their fortunes in the Americas in the 19th and early 20th centuries and returned home to spend it (including my own great grandfather).

There are lots of others – Tazones, Luanco, Luarca – but the grand old lady of the coast is Gijón (Xixón in Bable), with gracious 19th-century architecture; a popular city beach; the charming Cimadevilla old maritime quarter; fascinating ruins of an ancient Roman bath; a pretty cool new aquarium; and some good shopping and great nightlife. There are two other main cities. Capital Oviedo (aka Uvieu) is a gem of an urb, one of Spain’s cleanest and best-cared for, a city of fountains and extremely appealing architecture from the cutting-edge (such as Santiago Calatrava‘s convention centre) stretching back more than a thousand years (there are a trio of exquisite churches, right, dating back to the 9th century that are among Europe’s finest Romanesque buildings). Exploring parks like the Campo de San Francisco; Old Town streets like Calle Cimadevilla; and landmarks like the Gothic cathedral and the covered market are a true delight – all the more so because of the lively street life, especially due to the large student population. By the way, if you’ve seen the movie Vicky Cristina Barcelona, you’ve seen Oviedo, which is where some scenes were shot (in fact, the city even put up a statue of the film’s director Woody Allen – I kid you not). Also by the way, it’s the home town of Spain’s new Queen Letizia.

Avilés is big city number three, once a somewhat grimy, industrial-feeling bit of business, now proudly shows off a rather handsome historic Old Town, along with one of northern Spain’s most striking modern landmarks, the Oscar Niemeyer International Cultural Centre, designed by the eponymous Brazilian architect and inaugurated in 2011.

Marvelous and exciting though these cities are, the essence of Asturias lies, I repeat, out in its countryside and smaller places. One iconic place no visitor should miss is Covadonga, a little more than an hour’s drive east of Oviedo. This mountainous area is the site where in 722 AD the only remaining unconquered Christian kingdom in Iberia finally beat back the Moors for the first time and thus began the reconquest of Spain. There’s a grotto shrine and a big fancy basilica, and lots of spectacular scenery. 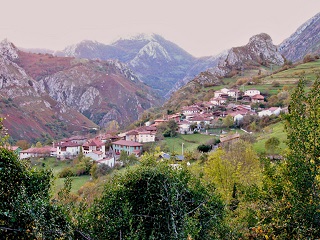 Which brings me back to the great outdoors. There’s a reason why Asturias is where the casa rurales movement really got rolling in Spain. It’s a place where you can sleep in an absolutely adorable little converted farmhouse complete with traditional hórreos (granaries raised on stone pillars) and open the shutters after a delicious night’s sleep to the sight of the light from the rising sun stealing across a towering peak majestically wreathed in morning mist.

Asturias has also long been Spain’s foremost centre of adventure, including hiking, horseback riding, kayaking, canoeing, whitewater rafting, rock and mountain climbing, canyoning, skiing/snowboarding,  caving, and both freshwater and ocean fishing, among other activities. Europeans as well as Spaniards have been taking advantage of the active opportunities here for years, and it seems the word spreads farther afield each year. The centres for this scene are the towns of Arriondas and Cangas de Onís, quite close to Covadonga.

And finally, all the above is very well and good, but I confess that one of the things I most love about this corner of Spain is its grub, including some of the freshest, tastiest fish I’ve ever enjoyed anywhere – a particular favourite is monkfish, which the locals call pixín, but there’s also fabulous hake, lobster, shrimp, salmon, even sea urchin (an acquired taste, I’ll grant). Cheese is a local speciality – there are 42 recognised artesenal varieties of Asturian cheese, the most famous of which is Cabrales, a pungent cow’s-milk blue cheese.

Unsurprisingly, it’s also one of the favoured ingredients in Asturian cuisine, as in a juicy entrecote al cabrales from grass-fed cows. Other classic local edibles include fabada, a rich white-bean stew with pork shoulder and sausage; caldereta seafood stew; arroz con leche  (rice pudding), and several foods like hake and chorizo sausage cooked in sidra (cider). 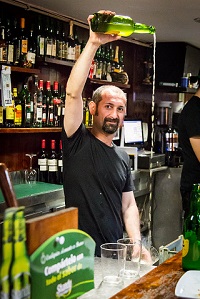 Which brings me to another thing that everyone in Spain associates with Asturias. La sidra (or as they sometimes call it up here, la sidrina), is a mildly alcoholic potion similar in potency to beer, but rather dryer than English cider or American hard cider. There’s a fizzy version, artificially carbonated, but the classic sidra is just mildly so, and served in a very unusual way: your server will bring open the bottle, life it over his or her head and pour the stuff into the glass from a height of three to four feet to “aerate” the liquid. Drinkers do this for themselves, as well, of course. It’s quite a sight to see. There’s a cider route where you can visit all sorts of producers, from small farmhouse llagares to large factories, a fascinating museum in the city of Nava; and though there are sidrerías (cider pubs) in every town, one especially fun place to experience a string of them is on Oviedo’s Calle Gascona.

Finally, quite a sound to hear, and something you wouldn’t expect outside of Hibernia. Las gaitas – bagpipes – are an age-old part of Asturian culture. Here they’re a little different-sounding than, say, “Scotland the Brave” or “Bonnie Dundee”, of course (have a listen to the video below), but arguably goes back further. You see, Asturias as well as neighbouring Galicia were home to the Celts before they arrived in the British Isles, and this is one of the major legacies of Celtic culture here.

It’s another example of how this wee bonny land truly offers one of Spain’s more complete packages – a unique and impressive history; luscious cuisine; pleasures of both the big city and idyllic countryside; adventure; beaches; and more.