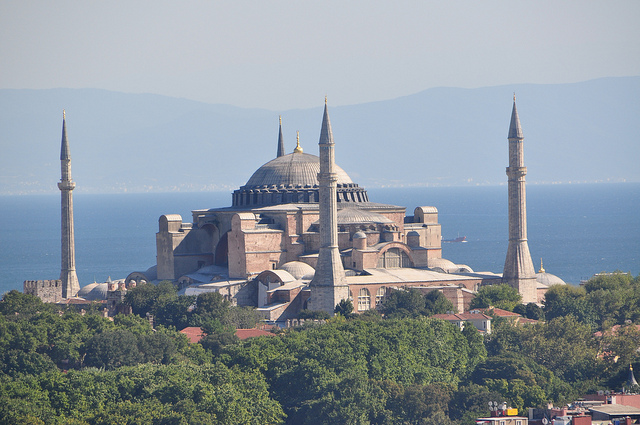 Today Iberia is thrilled to renew service to an ancient yet dynamic city that’s a unique mix of East and West – literally one of a kind (after all, what other metropolis is literally physically split between the continents of Europe and Asia?).

On the European side of the Bosphorus strait connecting the Black Sea with the Sea of Marmara is the Beyoglu district, with the 14th-century Galata Tower, built by the Genovese in the 14th century before the conquest of then Constantinople by the Ottomans; the short Tünel subterranean rail line (the world’s second-oldest after the London Underground); many of the city’s hotels and business and government institutions; and of course bustling Taksim, this city’s answer to Picadilly Circus or Times Square.

On the other side is the ancient core of the city, site of human settlement documented back to the 4th millennium BC, and naturally this is where many of its iconic landmarks are found, particularly in the old town of Sultanahmet. First and foremost among them, of course, is the most famous symbol of Istanbul, Hagia Sophia (top), that massive masterwork of 6th-century Byzantium. As impressive as it is from the outside, inside it’s positively breathtaking, especially its mosaics.

Nearby are the Blue Mosque and the Topkapi Palace, dating from the early Ottoman period of the 15th century and perhaps no better example of the grandeur that Constantinople achieved at its heights. Filled with patios, terraces, gardens, and pools, by the 19th century it also had hot and cold running water in the 19th century. On its grounds you’ll find the Istanbul Archaeological Museums, considered among of the best of its kind. A short stroll from here is the impressive Aqueduct of Valens, dating from 368 AD, and the astounding underground Yerebatan Sarayi (Basilica Cistern), built by the Byzantine emperor Justinian and which you’ll no doubt be seeing when Dan Brown‘s latest potboiler Inferno gets made into a movie.

The jawdropping sights don’t stop there. The Grand Bazaar is an enormous affair, with more than 4,000 shops and stalls distributed among 65 galleries where you can buy almost anything imaginable. Don’t forget to visit the second-largest market, as well, the Spice Bazaar in the Eminönü quarter near the Galata Bridge, filled not just with spices but all manner of exotic foodstuffs (get your lokum, aka Turkish delight, right here!).

Other very worthwhile highlights include the splendid Byzantine Chora Church; Gülhane Park, adjacent to Topkapi Palace, the city’s oldest and most expansive park; and the 19th-century, European-style Domabahçe Palace. To take a break, nothing better than a kebab or a Turkish-style pizza at a street stand – or even better, a Turkish bath in one of the hammams of Çemberlitas o Suleymaniye. It’s not just a supremely relaxing experience, but one that brings you to the heart of a traditional Turkish aesthetic/cultural experience.

Before going, I’d recommend picking up a copy of Istanbul: Memories and the City, by Nobel laureate Orhan Pamuk, a wonderful introduction to the character and idiosyncrasies of Turkey’s greatest metropolis and one of the greatest in the world.