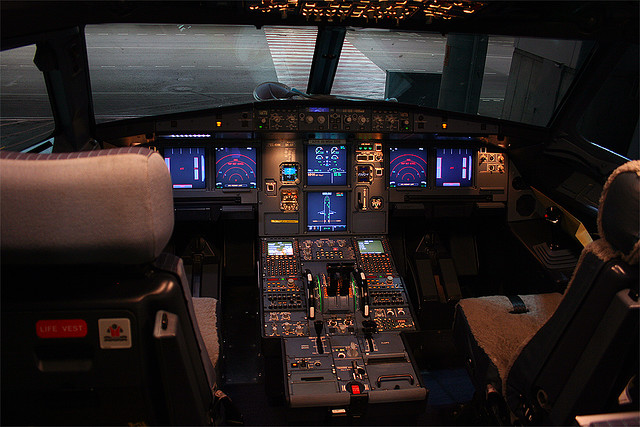 Several years ago, during a planespotting photo shoot near Barajas Airport, I tuned in via airband radio (able to receive but not transmit on frequencies used by pilots and air traffic controllers) to learn what airline and aircraft model was next due over the horizon in the coming minutes.

While I was hunting for the right frequency, I passed one that some of my companions mistook for a controller communication with a pilot. But it wasn’t; it was an ATIS.

That’s an acronym for “automatic terminal information service”, and this is basically a continuous broadcast, voice-synthesised from text and put out in airports with a certain volume of traffic, over a channel published on navigation charts. Its purpose is to keep cockpit crew informed of real-time airport conditions.

The reason it’s done this way is quite simple: otherwise, the tower controllers would have to be constantly providing this same information verbally to each incoming aircraft, saturating each channel and taking up valuable time.

The manner in which the information is transmitted varies from airport to airport but tends to follow a similar pattern:

· Identifying airport
· Transmission code (a letter A to Z)
· Time the recording has been generated (UTC/GMT)
· Information regarding runway(s) in use at that moment
· Weather conditions (wind, visibility, atmospheric pressure)
· Any additional useful notes such as obstacles, runway conditions, birds in the vicinity, etc.

Now let’s listen to a couple of examples of such transmissions. The first is an ATIS out of the airport of Malé, in the Maldives:

As you can hear, it starts with the airport identification (“This is Malé ATIS”), followed by the transmission code G for Golf. Incoming pilots would use this code in communication with the tower to confirm receipt of the information in this ATIS and therefore obviating the need to repeat it. It could happen that if enough time has passed between receipt of the ATIS and communication with the tower, the information will have changed and so will the code (to Hotel, or India), in which case the controller will recommend the pilot retune to a more currently updated ATIS.

In this second example below, it’s worth noting the time in which this information has been generated: 17:01 UTC (which of course depending on the local time zone will be a different local time). In these transmissions the time is always given in given Coordinated Universal Time to avoid any potential for confusion.

After that, the type of approach allowed at the airport is indicated (VOR/DME) for instrumental flights, as well as the runway in service (in this case, 18). Then comes the transition level, which is the altitude at which pilots stop using the altitude metre based on the actual air pressure at the airport and switch to the standard pressure of 1013 millibars. In this case, level 130 is announced, which translates to 13,000 feet.

The next information provided is meteorological: the wind on the runway is coming at 250º with a velocity of 5 knots (about 8 km/h), and visibility is 10 km or less. When the recording was made, the airport was having a moderate thunderstorm with a few low clouds at 1800 feet (600 metres), with a layer of few Cumulonimbus at 1900 feet and a much higher layer of dense clouds at 12,000 feet (about 4 km). If conditions at the airport were excellent (horizontal visibility greater than 10 km and no clouds), the abbreviation CAVOK is often used, which means Ceiling And Visibility OK

Continuing with the weather information, we har that the temperature at the airport is 30º C with a dew point of 27º C. This indicates the temperature at which condensation takes place, producing water drops, and thus fog, and is also an indicator of humidity. If the current temperature and the dew point are very close, we can conclude that there is a high probability of running into fog, and all the more so if night is falling and temperatures are dropping.

The next bit of transmission lets us know that visibility may be 6 km (in the air, that’s even less than it seems), with storm conditions and light rain. The taxi runway is temporarily closed, so we’ll have to look for an alternative to reach the terminal, if we were thinking of using that route.

Last but not least, we are informed of the frequency (123.9) to use to contact our air traffic controller in order to approach this airport.

Once the transmission is over, it repeats indefinitely until the operator in charge updates it.

As mentioned at the beginning, eht ATIS at each airport includes relevant information for that airport, although the structure is basically always the same, so as to make it easy for the pilots to follow. As a sample, you may listen to the ATIS recording for arrivals at London Heathrow:

Although the two recordings were done by an automated voice, that’s not always the case: it’s perfectly possible for the controllers to make the recording, which will repeat until they update it. Likewise, even though the recording is normally in English, at some airports it’s possible to hear the ATIS in the local language, for example this one from the Benito Juárez airport in Mexico City:

The ATIS service is not the only automatic transmission we can hear. Another common one is the VOLMET, which provides continuous automated meteorological information for aircraft in flight over a large area (for example, the entire Iberian peninsula).