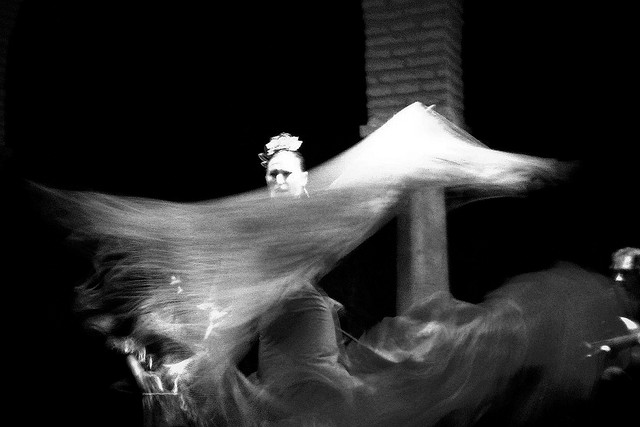 Ask many people around the world what comes to mind when they think of Spain, and chances are flamenco will land near the top of the list. The sinuous moves; the rapid, hypnotic shoe tapping; the staccato hand-clapping; the mesmerising guitarwork; the plaintive singing – if you’ve never witnessed a performance in person, your first time in particular will stay with you forever.

An art form and indeed a sensibility closely intertwined with the culture and traditions of Andalusia, flamenco grew out of the Roma (gypsy) community – exactly where and when has still not been pinpointed. But it’s first mentioned in 1774, and most theories point to a triangle between the cities of Cadiz, Jerez de la Frontera, and Seville, from which it spread to the rest of the region and diversified in style.

(And anyone travelling to Seville between September 12 and October 12, 2014)

That diversification continues today. The elaborately costumed tablaos put on for tourists are just one side of the coin. There are classical versions, purist versions, minimalist versions, even jazz and pop versions. In 2010 UNESCO declared it an intangible patrimony of humanity, and its popularity has been spreading worldwide (there are apparently more flamenco schools in Japan these days than in Spain).

But Andalusia is and will remain the heartland of this uniquely Spanish form. And following are top spots to seek it out in some of the region’s top destinations:

Cadiz   The Barrio Santa María is this city’s flamenco stronghold, birthplace of countless artists and site of the Centro Municipal de Arte Flamenco La Merced, which holds all sorts of concerts and activities. The city tourism authority has a flamenco route, and you can also check out outstanding performances at local peñas like La Perla de Cádiz and Enrique el Mellizo.

Cordoba  The magic of the Mezquita is reflected in the Tablao del Cardenal in the middle of the Judería (old Jewish quarter). And recently the city has been host to an extraordinary annual event in June called La Noche Blanca del Flamenco (Flamenco White Night), where some of the genre’s top performers do their thing in various of the city’s iconic plazas and public spaces (in fact, this year’s edition takes place this June 21).

Granada   The home of the Alhambra is also the home to Sacromonte, a hillside district of hollowed-out caves where the purest form of flamenco, the melancholi cante jondo, survived. Visit the Cuevas los Tarantos, considered an institution, and Venta El Gallo, where the welcoming atmosphere makes you feel almost like part of this gitano clan.

Jerez de la Frontera  Famous in the minds of many for its sherries, it’s also home to the Barrio de Santiago, which gave the world artists like José Mercé and El Capullo, and is today the site of the Centro Andaluz de Arte Flamenco) and the Barrio de San Miguel, birthplace of La Paquera and one of the all-time greats, Lola Flores. Peñas not to mis here are Los Cernícalos and Tío José de Paula.

Seville  Triana, an ancient district across the Guadalquivir from the main city centre, has traditionally been the local wellspring of bullfighters and flamenco artists. So naturally it’s here you’ll find the best bars, peñas, and tablaos to soak up the real deal, such as Lo Nuestro on Calle Betis and Casa Anselma on Pagés del Corro, a friendly, animated spot with a dramatic finale at midnight when the lights go off and the whole room movingly sings a religious song famously part of the annual Romería del Rocío. On the other side of the river the top tablaos are El Arenal and Los Gallos.