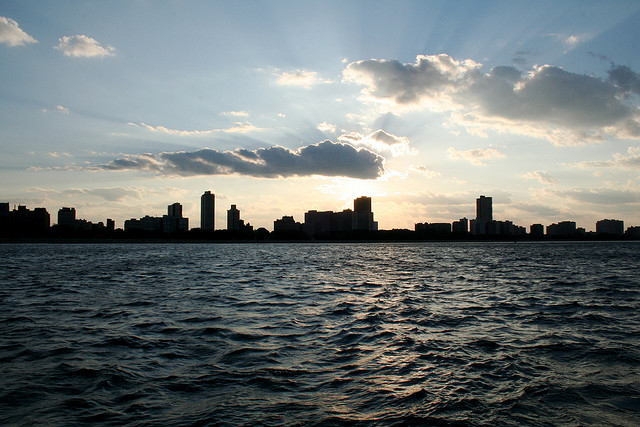 A visit to Chicago is like diving headfirst into the American way of life.  Indeed, this may be the most American city of all: skycrapers scraping the sky, enormous green spaces, all the races of humankind coexisting, multitudes crossing the crosswalks, and countless opportunities to open your wallet and spend some cash. This is the idea: spend, spend, spend. But somewhere, in the midst of all that shopping, make sure to leave some time to admire the grand architecture of this city.

Not too windy? That would be unusual; Chicago is not known as the windy city in vain. Downtown, you’ll gawk at the splendid mix of Art Deco buildings and no-less-beautiful steel and glass structures. The Magnificent Mile is a grand boulevard where you’ll find those inanimate giants, restaurants to repeat time and again, and the best shopping options. Already reaching for your wallet? Wait, first you have to take a stroll around the Loop, the centre of the urban centre.

The Sears Tower is the tallest tower in North America and second tallest in the world, after the Petronas Towers in Kuala Lumpur. Look up and you’ll see that the building never seems to end. The John Hancock Observatory is the second-tallest skyscraper in Chicago. It has 100 storeys and a restaurant and observatory on top from which you can see up to 80 km (50 miles) into the distance. Fifty miles and four states, as the city sits on the shores of Lake Michigan, shared by Illinois, Wisconsin, Indiana and Michigan.

The eclectic mix here is what makes Chicago Chicago: The arches of the Rookery building, the curvaceous floral ironwork of the Carson Pirie Scott, the green marble of the Carbide and Carbon Building, the neo-Gothic lines of the Tribune Tower… Everything is on a grand scale. Don’t miss the freshness of the water in Buckingham fountain, one of the main attractions, built in 1927. There’s also the Adler Planetarium (next to numerous art galleries), the Lincoln Park Zoo (the oldest in the US) and the Navy Pier. This last place is the most popoular shopping and entertainment complex in Chicago, with an imposing 3D movie theatre. Last but most certainly not least, head for Millenium Park‘s Cloud Gate, an enormous rounded doughnut-type thingie where the distorted reflections of the skyline will wow even the most jaded of travellers.