“It´s all about choices,” say the English these days. And that’s pretty much how many of us visitors feel when faced with a map of London and the daunting task of figuring out what to do (and not to do in this sometimes overwhelming city on the Thames. One thing we can be sure about the European Union’s largest urban area is that it has a gift for never failing to surprise us.

And besides all the wonderful traditional sightseeing, another of this urb’s major allures is the enormous creative flow that courses through it, with districts like Hackney international bywords for trendsetting and alternative scenes à la Banksy. But what about staid old spots like Westminster or The City? Well, ladies and gents, less staid than you might imagine – these days they’re home to some young lively hives of creativity. Westminster is of course the elegant, central neighbourhood known for upmarket shopping mecca Oxford Street. But a stroll through some of its other streets yields some curious finds indeed, such as the rather striking white building at 66 Portland Place. Feel free to step into the Royal Institute of British Architects (right) and you’ll see that everything around you is fashion: the ceiling fixtures; the sinuous, silvery reception desk; even the computer screens. And you’ll be fascinated by the exhibitions, even its café, and above all its shop (you’ll be hard-pressed to walk out without buying something, such as one of its gorgeous books on designed or architecture). And likely none of that was planned.

It’s typical of what makes London so cool. Let’s take another example, just any old street. On the West End‘s Great Titchfield Street, the addresses are occupied by talent agencies, fashion businesses, exclusive boutiques like Oui and 89, or posh hair salons such as The King’s Canary and 81. And the fact is that all those handsome old Victorian houses are swarming with handsome young – and creative – people. 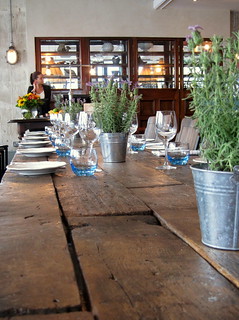 And where do these hotties break bread? You’ll see them on Great Titchfield, for example, in places like Scandikitchen, a cosy spot at number 61 serving Nordic cuisine, or at a contemporary brasserie called The Riding House Café at 43-51 (left; it’s essentially the same clientele, just with a slightly more hip at the former and more preppy at the latter).

The street also has home-design stores to die for, like Republic of Fritz Hansen at No. 13, a designer decor paradise, or Material Lab (No. 10), which calls itself a place to “discover the latest trends and innovations”.

Then of course at the end of the street we find ourselves back on Oxford Street – just for a moment, because then it’s time to duck down a lane into a true gem of a fine, the impressive Photographer’s Gallery (16-18 Ramillies St.) a once small Covent Garden spot which grew over time and is now a hotbed of the avant-garde, its welcoming café the site of much heady chatter about all manner of artistic projects. The person at the table next to you could very well be the next Damien Hirst or Stella McCartney. Between the fascinating stuff on display throughout these five floors (such as the current exhibition of John Deakin’s work in Soho in the 1950s and 60s) and the urban fauna taking it all in – well, you get the picture. Another part of Westminster which hasn’t lost its groove is groovy Carnaby Street, these days pedestrianised and a swell spot to stroll for quirky shops, pubs with outdoor seating, and smart, casual little eateries like Leon (“natural” fast food), Flatplanet (exotic flatbreads), Kua ‘Aina (the local branch of a famous Hawaiian burger joint). Or if you’re a fan of Asian, I’d highly recommend the dim sum at Ping Pong, next door to Schott Music, a beloved emporium of sheet music and books.

OK, let’s say adieu for now to Westminster and move on to executive city, known of course as “The City”, the core of London that lay within ancient city walls and is now its financial hub. Perhaps that doesn’t sound too exciting? What if I were to tell you that amid its skyscrapers you’ll find Europe’s largest interdisciplinary arts centre?

That would be the Barbican, a lively and positively humongous complex bursting at the seams with expositions; music; theatre; dance; first-run and classic films; and all kinds of workshops, seminars, festivals, and so on – all absolutely world class, of course. The Royal Shakespeare Company and two symphonies are based here. Yet at the same time it’s welcoming enough that you’ll find plenty of Londoners just hanging out here. There are weekly tours of the labyrinthine building, inaugurated n 1982 and known for its massive, fortresslike “brutalist” architecture.  In a space called The Curve, this year an installation called Momentum (below) has been blending art and technology to alter perceptions of time and space. It’s just one example of the powerful stuff that goes on here.

If you can tear yourself away from the Barbican, it’s just a hop and a skip (or maybe a stagger, after all that Momentum), to the incomparable St. Paul’s Cathedral, then onward to the wonderful Tate Modern, currently featuring a landmark exhibition of Matisse cut-outs.


All this, of course, is just scratching the proverbial surface. Ready to get creative?

Iberia flights from the USA, from Spain.