They call it the island of eternal spring. It’s Tenerife, one of the all-time top choices of warmth-hungry Europeans. And besides being an island full of history, culture, and entertainment options, it’s a nature-lover’s paradise, with a great variety of impressive environments: beaches, gorges, cliffs, banana fields, forests…

Top of the list, of course, is the dramatic volcanic landscape on and around El Teide, Europe’s highest peak (and a volcano that thankfully has been slumbering since 1909 and without a major eruption since 1798).Teide’s towering caldera, the surrounding lava fields, and local flora such as the towering red bugloss (tajinaste) plant all help make this UNESCO World Heritage Site an amazing bucket-list must. But we’re just getting started with Tenerife’s geological gems.

North of here, near the town of Icod de los Vinos, the Cueva del Viento Sobrado (Cave of the Wind) is Europe’s largest lava tube and the world’s fifth largest, open for exploration of its dramatic passageways, chasms, and terraces, with a feel something like the proverbial voyage to the centre of the earth.

A bit up the coast from the cave, in the Orotava Valley, there’s the Reserva Pinolere, a hilly and compact but enticingly spread rich with laurel, pine, chestnuts, and heather, along with watercourses and more recently an interesting ethnographic museum that teaches about the way of life of the region’s ancient Guanche people.

The coast west of El Teide near the resort town of Los Gigantes is also worth a visit not just for the local beaches but for one of the most breathtaking sites in all the Canary Islands: the Acantilados de los Gigantes (Cliffs of the Giants), rearing vertically up from the sea, some places up to 500 metres (feet).

Down in the south of the island near the town of Adeje, meanwhile, the Barranco del Infierno (Hell’s Gorge) hardly seems hellish at all, with its green slopes and elegant waterfalls (the footpaths through the ravine were closed for several years but are expected to reopen soon this summer). 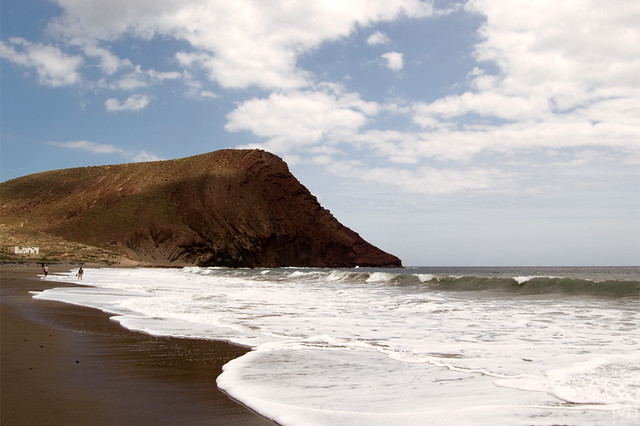 Then, of course, there’s the aspect of nature that most draws visitors to this island: the glorious Tenerife beaches. In the south there’s Playa de las Galletas (with dark sand, and nearly pristine), Playa de los Cristianos (famous for annual Carnaval celebration and its lively port, from which you can take ferries to the islands of La Palma, Gomera, and El Hierro), Playa del Cabezo (ideal for surfing), Playa del Médano (a windsurfing/kitesurfing mecca), and Playa de la Tejita (above, known for its section of nude beach as well as its proximity to Montaña Roja Natural Reserve).

Naturally (no pun intended) one can’t leave Tenerife without experiencing a bit of its cities and towns, so here’s what not to miss. La Orotava is famous for its Casa de los Balcones (House of the Balconies), its aristocratic houses, its flower-bedecked streets, its Mirador de Humboldt lookout point, and its Quinta Roja Gardens.

The island’s most striking architecture can be found in San Cristóbal de La Laguna, whose old quarter is also a UNESCO World Heritage Site, which besides the cathedral harbours a wonderful collection of churches and palatial manses.

In the bustling capital, Santa Cruz de Tenerife, meanwhile, there’s always a lively atmosphere, and much of it is oriented toward the sea. Highlights include the futuristic, iconic Auditorio de Tenerife, designed by Santiago de Calatrava, the César Manrique Park (work of the eponymous famous Lanzarote artist), and the Plaza de España, marked by an artificial lake at its centre.

Because even when it’s manmade, Tenerife’s a natural.