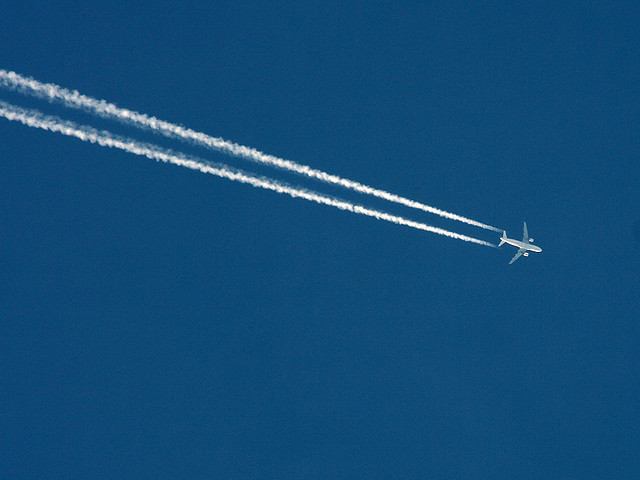 Talk about aircraft naturally means talking about aircraft speed. That after all is the element that creates the airflow which in passing across the fuselage wings generates the lift needed to propel a passenger-filled machine weighing dozens of tonnes through the sky.

It’s not surprising, therefore, that when referring to aircraft speed, for pilots and engineers it’s actually a matter of not one but various speeds.

The instrument used (once exclusvely, and still primarily) to measure aircraft speed is a little device called a Pitot tube (below). Stemming from an invention by 18th-century French engineer Henri Pitot, this is indeed a tube, oriented toward an air current (in an airplane, facing frontward), which depending on the speed of the current is subjected to varying degrees of pressure. These pressure readings correspond to air velocity. OK, just to review the basic stages of a flight: embarkation is followed by taxiing on the runway to achieve takeoff speed; the aircraft then increases speed as it ramps up to cruising altitude. When it nears the destination, it reduces velocity as it descends, then finally touches down and offloads its passengers and cargo. This may seem belabouring the obvious, but it’s by way of emphasising that each stage is associated with certain velocities that must be precisely observed as per various models of aircraft.

So now let’s look at the most typical velocities according to their most natural order. It’s important to note that these will vary depending on the type of aircraft. Logically, the speed that will get a small Cessna 152 into the air (around 65 knots, or 110 kilometres/68 miles per hour) is less than that to get a Boeing 747 (about double that) and also depends on other factors such as weight during takeoff, outside temperature, and even airport altitude.

Here’s how it works: The aircraft reaches the runway head, applies maximum power, and begins rapid acceleration. At a certain point it reaches V1 speed (aka takeoff dicision speed), spoken aloud so that both pilot and co-pilot can be sure to confirm that it has been reached. Until this moment, the pilots can opt to brake or abort the takeoff at will. But once this speed has been surpassed, the plane inevitably must leave the ground, even if an engine fails.

VR is rotation speed, the velocity at which the plane’s forward wheel leaves the ground (while the main landing gear does not) and commences the angle of attack (aka angle of incidence) to lift the vehicle into the air.

V2 is takeoff safety speed, the velocity at which a plane can leave the ground even with one engine disabled. This is in case that just after V1 there should be an engine malfunction, the aircraft can still make it into the air with complete security.

VX is the speed that permits the best possible angle of climb. This is the velocity at which the initial descent is usually performed, since the main objective is to achieve the maximum altitude in the minimum distance with respect to the ground (in order to remain as close as possible to the departure airport in case of difficulty).

VY is the speed that permits the most advantageous rate of climb. This comes into play once a determined altitude has been reached (in general aviation, usually about 1,000 feet/330 metres) at VX. In fact, this speed can seem very similar to VX, but there’s one subtle difference: with VX the plane ascends a minimal distance above ground, whereas at VY  it reaches a higher altitude in the least amount of time regardless of the distance travelled.

Once the plane is in the air, at cruising altitude, what is the speed that should be maintained? VCx is the generic name for cruising speed, except during periods of turbulence, during which the pilots go to VT, the speed at which the plane will travel most easily. All the while, they need to stay below the VNE (never-exceed speed), which otherwise could have problematic consequences for the structure of the aircraft.

At cruising altitude, the number that registers on the cockpit dashboard –  say, 200 knots –  you might assume is the aircraft’s speed of travel. But it’s not quite that simple. This is actually the indicated airspeed (IAS), the an approximate reading that depends on altitude (the higher the aircraft is, the less dense the air, and the lower the numbers) and temperature (colder air is denser, yielding higher numbers).

What the IAS doesn’t tell us is the speed at which the plane is moving with respect to the ground (and which, at the end of the day, is what really counts for travellers – say, the distance between Madrid and London). This is because headwinds can slow an aircraft down or tailwinds can push it along faster.

To cite a somewhat exaggerated example, let’s say the instruments readout says 100 knots – meaning that the outside air is buffeting the above mentioned Pitot tube at a speed of 100 knots. But there’s also a 90-knot headwind. So what is the speed relative to the ground? Incredible as it may seem, the answer is just 10 knots – barely 10 km/6 miles per hour.

But maybe not completely exaggerated. Because if you find that hard to believe, have a look at this Airbus performing a demonstration flight in a strong headwind:

At the 0:32 mark this enormous Airbus 330 seems practically flying in slow motion. The reason is simple – apart from the angle of attack, the tremendous headwind reduces the speed at which the aircraft travels with respect to the ground – a value termed GS (for ground speed, of course).

So now as the plane gets close to its destination and begins its descent, it should reduce veolicty to VF, designed flap speed, below which the wing flaps can be deployed, allowing the aircraft to further reduce speed sufficiently to be able to land safely. During final approach, this becomes VRef (landing reference speed), taking care to in no case drop below VS (stall speed), below which the aircraft will lose lift.

And that, my friends, is life in the airline fast lanes.