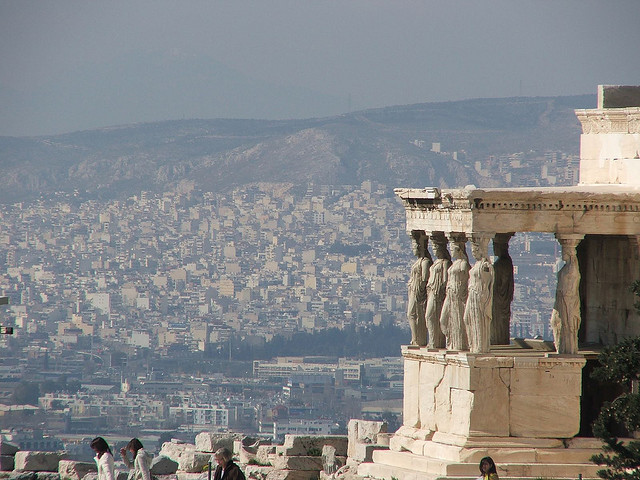 It’s truly an awe-inspiring feeling – climbing Athens’ Lycabettus Hill and gazing out over the sprawling city that was the cradle of democracy is quite an experience, once that connects us to the past. The capital of Greece is proud of its unique heritage, and of course has plenty of reason to be. And we of course are extremely proud to add it as a year-round destination.

Atop the most famous hill of all, the Acropolis is the mother lode, as it were: the Parthenon, the Erechtheion (the most sacred temple of all), the Temple of Athena-Nike, the Propylaea, the Odeon of Herodes Atticus, the Theatre of Dionysius. Then in addition to soaking up the incredible atmosphere of the ages afforded by all the above, you’ll want to spend a good chunk of time in the five-year-old Acropolis Museum, which displays many of the area’s original treasures, including the caryatids of the Erechtheion and some of the marvelous works created for the Parthenon by the great classical sculptor Phidias.

All of this forms part of Greece’s most famous and important archaeological zone, and naturally it’s almost always thronged with visitors. Well worth a bit of occasional jostling and dodging for such an amazing experience, of course – but on the other side of the hill you’ll find other classical ruins that are less well known and therefore less crowded: that of the agora, the Aeropagus, the Temple of Ephestos, the Library of Adrian, and the Hill of the Muses. Also fascinating and highly recommendable: the Arch of Adrian and the Temple of Olympian Zeus.

Once you’ve imbibed deeply from the well of antiquity, it’s time to move forward to another era which in a way is even more evocative of Greece. The Monastiraki district (right) is a maze of whitewashed houses, lovely Byzantine churches, and these days also of restaurants, cafés, pubs, restaurants, and souvenir shops whose winding little lanes are filled with a mix of tourists and neighbourhood types. Try to make it here on a Sunday, when the colourful weekly street market takes place. Monastiraki is also a great area to sample this nation’s savoury cuisine, as is the similar-feeling Plaka neighbourhood, which apart from its more touristy bits is also full of charming little plazas where time seems to stand still, where you’ll find locals chatting and young people zip through on motorbikes. Another important side of Athens are its newer, grander plazas. The one you don’t want to miss is the Presidential Palace, Syntagma Square (site of the national parliament and the Tomb of the Unknown Soldier) and the Zappeion Gardens) – together they make up a complex of majestic bearing, and the tomb’s changing of the guard is a classic photo op (left).

If you’re up for a bit more strolling, you can push on a bit farther, to the impressive Olympic Stadium built for 2004 Olympics. And as long as you’re out here, have a look around the port of Piraeus, with its yachts, cruise ships, ferries to the islands, and freighters, then maybe have a bite or at least an aperitif in a seaside café.

Back downtown, on Panepistimiu Street, we can find Athens’ most handsome neoclassical edifices, the National Library, the University of Athens, and the Academy of Athens. And do also keep an eye out for various historic Orthodox churches as you make your way along. The Byzantine-derived artistic tradition found in the art and architecture of these churches has its own singular beauty, and those especially drawn to it can drink their fill at one of the world’s most important collections, the Byzantine Museum, in the north of the city.

Man (and woman) does not live on sightseeing and moussaka alone, and the shopping and nightlife of Athens certainly do not disappoint. Kolonaki is the district for the former, while those interested in partying should head for the pubs and clubs of Psiri and Miaouli. Proof positive that despite challenging times of late, Athenians still do their best to enjoy life like good Mediterraneans. Opa!