Just several weeks ago in March, Spain marked a cultural high point of 2014 when the National Archaeological Museum reopened after a six-year, €65-million renovation. It’s still housed in the same handsome 19th-century neoclassical building on Calle Serrano in downtown Madrid, and still displays a wealth of world treasures including some unique to Spain such as a replica of the spectacular Altamira Caves prehistoric art and the iconic Celto-Iberian bust known as the Lady of Elche (top). What’s different is a clean, cutting-edge redesign that provides more natural light, greater interactivity, and of course more multimedia sizzle.

This of course is just one of the superb institutions that put this city into the top ranks of the world’s museum capitals. Most people of course know of the Prado, one of the world’s most famous art museums. But there are plenty of others that will send culture vultures to museum heaven. Here’s a rundown of the top must-sees, in alphabetical order:

CaixaForum Museum  Madrid’s newest major museum, centrally located on Paseo del Prado since 2007, it features contemporary art, meaning work from the 1980s on, as well as fascinating temporary exhibitions such as the current “Genesis,” Brazilian photographer Sebastião Salgado’s look at some of our planet’s endangered nature and cultures and “Pixar, 25 Years of Animation”. But just as striking as whats inside is what’s outside – a façade filled with thousands of plants (above).

Museo del Prado  A classic evergreen of which I absolutely never tire, it displays some icons of Spanish art such as Las Meninas by Diego Velázquez and The Third of May and The Naked Maja by Francisco Goya, as well as some other European masters like Tintoretto, Rubens, and Fra Angelico (and I invariably end up spending a bunch of time in front of Hieronymous Bosch’s delightfully creepy Garden of Earthly Delights).

National Decorative Arts Museum  Marking a century of existence this year, its collection, housed in a five-floor, 19th-century palace overlooking Retiro Park, consists of ceramics, tilework, furniture, tapestries, carvings, and more from all Spanish history reaching back to the Middle Ages. One very cool highlight here is an actual 18th-century kitchen transplanted from a Valencian mansion. Now we’re cookin’.

The Reina Sofía  Named after the country’s current queen, this is the place for taking in some amazing work from the 20th and 21st century right up to the latest and greatest. Standouts here include Diane Arbus, Francis Bacon, Ross Bleckner, Georges Braque, and Alexander Calder, but obviously here Spaniards are especially where it’s at, with the likes of Miquel Barceló, Eduardo Chillida, Salvador Dalí, Julio González, Juan Gris, Joan Miró, and Pablo Picasso, whose incomparably searing Guernica is the collection’s most famous piece. 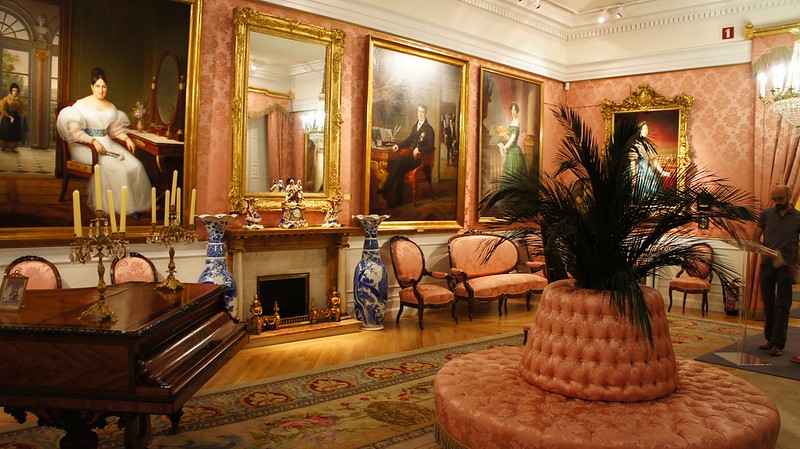 Romanticism Museum  Such romantics, the Spaniards. Since 1924, a former 18th-century marquis’ palazzo at the edge of downtown’s now trendy Chueca neighbourhood has been set up as a window into upper-class Madrid of the 19th century, with period furnishings, artwork, and photos (above) reflecting the history of the era and, yes, its romanticism, which was the artistic/intellectual movement of the day that pushed back against pure rationalism and is reflected particularly in the paintings, drawings, and sculpture found in here.

Royal Academy of Fine Arts  The Real Academia de Bellas Artes is another undersung gem, especially if you’re a fan of Spanish painting and sculpture, with marvelous stuff by Velázquez, El Greco, Picasso, González, and gobs of Goya, plus Bartolomé Esteban Murillo, José de Ribera, and Francisco de Zurbarán. You’ll also get an eyeful of other European masters like Raphael, Rubens, Titian, and Van Dyck.

Thyssen-Bornemisza Museum  This funnily named bit of business (thanks to being founded in 1992 by a Germano-Dutch-Hungarian industrialist married to a onetime Spanish beauty queen) spans eight centuries of European and American painting, with biggies including Durer, Caravaggio, Rembrandt, Van Gogh, Hopper, and Chagall. It’s also IMHO particularly well designed and right-sized for a museum experience of a perfect length.