Many of those who feel passionate about commercial aviation find ourselves occasionally in doubt about identifying one or another aircraft model, so we thought you might appreciate a handful of tips, pointers, and tricks.

Let’s start with a list of some of the most common models flying the skies today. Airbus, Embraer, Bombardier, and Boeing are the main manufacturers, and from our point of view as Spanish spotters most of the models we come across are Boeing B737; Airbus A319, A320 and A321; Embraer 195; and Bombardier CRJ 200, 900 and 1000, as these are the planes most utilised for short and medium haul. Also in Spain we see the ATR 72 (made by the Franco-Italian manufacturer ATR), smaller, shorter-range twin-engine turboprops operated primarily by Binter Canarias and AirNostrum.

The best tip for distinguishing between planes is to look for structural differences, such as the position of engines; the shape of the cockpit windows as seen from head-on; or the varying wing silhouettes.

These are the Airbus A319, A320 and A321 aircraft which Iberia uses for its short- and medium-haul flights. The cockpits are identical, so you can’t tell them apart that way. However, the A319 has a single emergency-exit window over over the wings, whereas the A320 has two. The A321, meanwhile, is quite  bit longer than either of the other two. It’s also worth noting that the first two models have two doors per side while the A321 has up to four door on each side.

After learning how to distinguish between different versions of the same model, let’s compare an airplane from the European manufacturer Airbus with one from the American company Boeing. 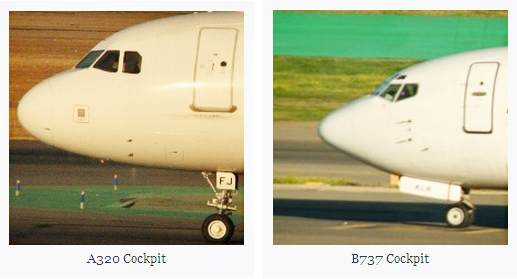 As we mentioned above, the main identifiable difference from the front of these similar looking aircraft is the shape of the cockpit windows, along with the fact that the nose of the Boeing is much more pointed. Finally, note the wheel on the front landing gear. At left, the shock absorber of the Airbus is exposed to view, unlike the Boeing. The landing gear of the Airbus is also more elongated than that of the Boeing, and therefore the Airbus models tend to be somewhat higher than the Boeings.

In the photos above you see Air Nostrum’s ATR 72, included here to point out some of its salient features. You’ll notice that in the forward section there’s a large doorway; this is for loading and unloading of baggage. The narrower doorway with stairway incorporated is at the rear, for the entrance and egress of passengers and crew.

In the second of the two photos, the ATR 72 is taxiing on the runway and you can observe the wing silhouette, including their position above the fuselage. This of course is one of the model’s most pronounced features, the other being the fact that its engines aren’t turbines but turboprops.

We’ll round out this post with the Bombardier CRJ in its 200 and 1000 versions.

The first, the CRJ 200, has been in the Air Nostrum fleet for years. Its most significant feature is that its engines are located toward the end of the fuselage rather than attached to the wings, as is the case with most aircraft (this is due to its small size). There is only one emergency exit over the wings. The second, the CRJ 1000, is a relatively new addition to the fleet, and is much longer than the 200, with two emergency exits.