You’ll be pleased to know it turns out that these days getting into the Viking spirit isn’t all that hard: you no longer have to board a narrow longboat with a lot of greasy, smelly chaps and pillage countrysides, but just hop on a jetliner to Copenhagen, then head out into the hinterland. In Denmark, green landscapes and historic cities and towns are interwoven from one end of the country to the other. For example, the country’s third largest burg, Odense, 147 kilometres (91 miles) from the capital, offers a lively, brightly coloured downtown, where at Bangs Boder 29 the beloved writer Hans Christian Andersen was born and his childhood home can be visited to admire a variety of exhibits and artifacts including editions of The Little Mermaid and The Ugly Duckling in various languages. Also here, set amid charming little wooden houses with tiny windows along cobblestone lanes, is the grandiose Gothic cathedral of San Knud, Odense’s 19th-century city hall, and the Funen Village, an open-air museum where period houses, shops, and actors in period dress recreate rural life on this island centuries ago. Your kids will love it, and so will you.

On Denmark’s mainland, in the north of the Jutland peninsula and divided in two by the Limfjord is another enchanting city, Aalborg. A good place to start is the 14th-century Lutheran Cathedral of St. Bodolph, named after a well-known English holy man of the Middle Ages, and the yellow Baroque Old City Hall. As you make your way along, check out the houses, a mix of brick, wood, and stone, before visiting the dungeons, ramparts, and casemates of the distinctive, half-timbered Aalborghus, the castle dating back to the 16th century (then, for a breath of fresh air, have a stroll in Kilde Park, the city’s oldest). Local Viking history can be found on Lindholm Hoje hill, site of a cemetery with 700 grave and the remains of a street from a Viking village (below, a scene from a “Viking market” staged there). Come nightfall, head for the youthful bars, vibes and crowds along Jomfru Ane Gade. 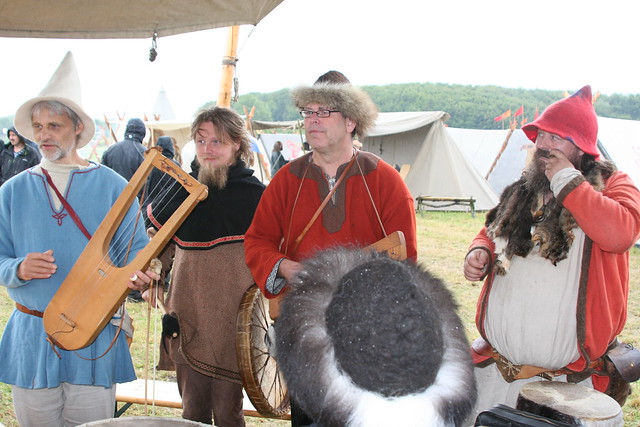 Speaking of nightlife, there are few cities in Denmark the equal of Aarhus, the “Erasmus city” par excellence. By day, your best bet is to grab one of the public City Bikes to tool around this very accessible, friendly city. You’ll find the elegant downtown Store Torv with its impressive Clemens Church Kirke. Follow the famous local canal past notable landmarks such as the theatre, the Viking museum, and the townhouses of the Skolegade. As the sun starts sinking and finally disappears the college kids and twentysomethings start multiplying on the streets. Things start on a mellow enough note in the pubs but kick into higher gear as dance clubs like Train and Fabriken open for the night – until by 5 in the morning or so you could find yourself on a packed street in a scrum of modern-day young Vikings (and Vikingettes) anxious for a little lighthearted pillaging (or at least more partying). To the longboats!

(For more about Denmark – specifically Copenhagen’s fashionable Nørrebro and Vesterbro neighbourhoods – check out this article in the April Ronda magazine. And of course watch this space!)