Every aircraft that legitimately takes to the world’s air lanes, even before it starts its engines, is under the direction of one or another air traffic control centre, especially airport control towers. As you might imagine, it’s not easy to be an air traffic controller, nor is it to qualify to become one.

Last month we described the various functions involved in air traffic control, and we asked, could you see yourself doing a job like this? For those of you who said yes – or are simply interested in what it takes to become a controller, here are the basics. In Spain, for example, a round of candidate tryouts will start with 8,000 candidates undergoing highly exacting exams in general knowledge, maths, advanced-level English (since much of air traffic control is conducted in this language), and once the candidates have been whittled down to 500, complex “psycho-technical”  tests.

As if all that weren’t enough, surviving candidates must submit to an in-person interview, in which the responses to the questions posed will ultimately decide their fitness for the job. Those who make it through all the above enroll in a course of instruction lasting about 18 months. There’s also a real-life practice component of the training, performed under the supervision of an instructor, who performs a final evaluation of the student to certify (or not) his or her official qualification as a controller. 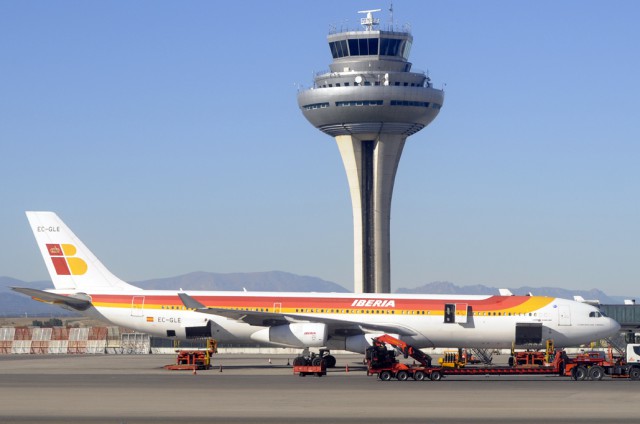 The mission of air traffic controllers is to allow aircraft to arrive and depart airports in a timely and above all orderly fashion. But not all planes require the same degree of control; for example a large long-haul aircraft needs more space and maneuvering time than a small propeller plane. Add to that the fact that each airline has its own particular flight and operating procedures (all, of course, according to international aeronautical standards), meaning that controllers usually cannot issue exactly the same instructions to aircraft of two different carriers.

Another factor that controllers face is language — obviously, cockpit and control tower need to be able to understand each other in order to make sure instructions are properly complied with. Communication is carried out by radio, and there are five languages authorised by by the ICAO (International Civil Aviation Organisation), including Spanish, but for the most part, English is the default language (as shown even in the video above); whatever language is used, a very precise aeronautical terminology is employed.

It’s important to keep in mind that in the air, it’s not a question of the traffic controller being “in charge” of things but in fact the airplane pilot. If a controller issues an authorisation and the pilot follows it, it’s that pilot who retains ultimate responsibility for the aircraft’s safety and that of its passengers. In the event of an on-board emergency or of a weather emergency, the pilot should notify the tower as to why a particular instruction cannot be complied with, and the controller should then seek the quickest and safest possible alternative.

Controllers perform their duties from airport control towers built at great heights in zones of optimum visibility. These can be thought of as observation and control offices, equipped with radio and tracking equipment designed to pinpoint the location of each aircraft in local airspace in case of fog or poor visibility due to storm or other meteorological conditions. It’s from here that aircraft approaches, ascents, descents, and runway taxiing are directed, day and night.