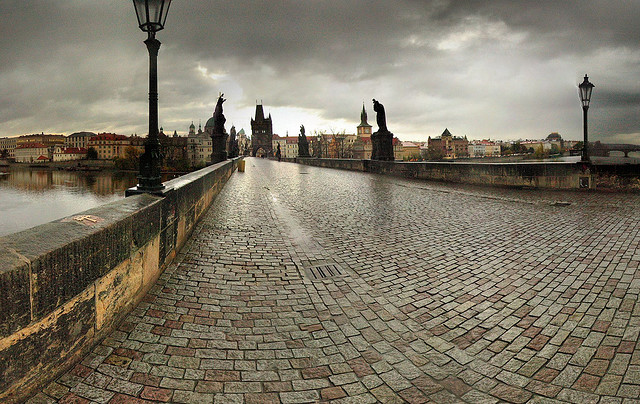 A number of old European cities and towns are commonly described as having “fairytale” cityscapes. But in many ways, the capital of the Czech Republic, dating back to the 9th century, leaves them all in its pixie dust, with its dramatic spires, colourful storybook façades, vibrant red roofs, and glittering river.

The fantasy in the city dubbed “magical Prague” begins in Staroměstské Náměstí (Old Town Square), where you could get a sore finger from all the picture-taking you’ll be compelled to do of eye-popping sights like its imposing Týn Church and of course the square’s star attraction, the astronomical clock whose animated figures put on an hourly show. Nearby, the Jewish quarter with its ancient synagogue, and in particular the Old Jewish Cemetery with its cacophony of tombs tumbling all over each other, are like something out of a movie set.

Crossing the Moldau River, the Charles Bridge is a stately poem in stone, lined with 30 statues including the most famous, St. John Nepomuk (you’re supposed to touch the statue for good luck and make a wish). Jammed these days with pedestrians, buskers, and souvenir hawkers, the bridge deposits you in the equally historic quarter called Malá Strana, long a stomping grounds of artists, poets, and writers through the ages (and a good neighbourhood to browse for the handmade marionettes for which Prague is famous); here, too, is where you’ll find the Kampa Island Contemporary Art Museum and the graffiti-splashed wall that has become a famous homage to Beatle John Lennon.

From here make your way up to the icon that looms over the entire city: the Prague Castle complex, dating from 870 – once the seat of emperors, now of Czech presidents along with museums and sites such as the Lobkowicz Palace, a 16th-century gem with an art collection including Canaletto, Rubens, and Veronese. And speaking of fairy tales, right around the corner from here, it doesn’t get any more Brothers Grimm than Golden Lane with its teeny tiny houses that once housed castle guards (below left).

Back across the Moldau, the so-called Nové Město (New Town) is “new” only by comparison, with its famed epicentre at Wenceslas Square, dating back to the 14th century. Here we’ll find Art Nouveau and Cubist architecture; great shopping, street food, and nightlife; institutions such as the National Museum and the Museum of Communism; and culture ranging from the black-light theatre and other avant-garde performing arts to the grand opera of the National Theatre facing the riverfront.

Pivo (beer) is an absolute must when you’re in Prague, and though you can find it all over town, for the most atmosphere, head to U Flecků (Křemencova 11), U Medvidků (Na Perštýně 7), and U Zlatého Tygra (Husova 17). Café culture, too, is something not to miss – you’ll want to especially try waterfront Slavia (Smetanovo Nábřeží 2), a favourite of artists and intellectuals during the Communist period and a popular spot today; the Louvre (Národní 22), a historic spot once frequented by the likes of Franz Kafka and Albert Einstein; and the café at the Obecní Dům (Municipal House) on Náměstí Republiky (Republic Square) – a sumptuous Art Nouveau experience.