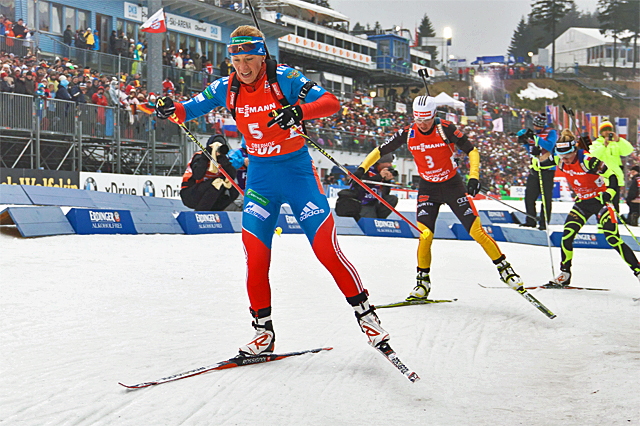 If, like most people, you think skeletons are for Halloween and curling is something you do to your hair, the Sochi 2014 Winter Olympics will rock your world. Along with the usual skating, skiing, snowboarding and hockey, if you’ve been paying close attention you may have noticed more exotic-sounding events such as luge, biathlon, curling, and yes, even the skeleton comes out of the closet. Just what are these winter sports that seem to pop up only quadrennially during the Winter Games? Here’s a quick primer:

Technically, as the name might imply, the word “biathlon” means “two sports,” without specifying which two. But in practice it most often refers to the combination of cross-country skiing and rifle-shooting. It was pioneered as a discipline by Norway’s military in the 19th century, and has been part the line-up since the 1960 Olympic Games in Squaw Valley, California. In a biathlon event, contestants ski around a set of trails, broken up by either two or four shooting rounds, half standing up, the other half belly-down. Depending on how they score in shooting, extra distance or time is added to each contestant’s total running distance/time. Then, as in most races, shortest total time wins.

These games have 11 biathlon events scheduled, of which as I write this we’ve seen two, the men’s and women’s sprints – and not surprisingly, gold on the blokes’ side went to a Norwegian, Ole Einar Bjørndalen (the oldest Winter gold medalist ever at age 40), while for the ladies it was won by Slovak Anastasiya Kuzmina. Not surprisingly, as in the winter games as a whole, Nordic, Teutonic, and Slavic countries make out well here; other Olympic medalists so far hail from Austria, Czech Republic, and Ukraine. For a bit about Team Spain‘s two biathletes in attendance, click here.

This may actually be one of the better known sports of this category – ironically, perhaps, because of oddball tales like the Jamaican bobsled team (made famous 21 years ago in the movie Cool Runnings, and this time out because it qualified once again for the first time since 2002, only to find themselves in Sochi without luggage or gear) and Team USA bobsledder Johnny Quinn (who this past Saturday got trapped in his hotel bathroom and tweeted a picture of how “I used my bobsled push training to break out,” punching through the door).

But I digress. Here you’ve got a race in teams of two or four making runs down narrow, twisting, banked, ice tracks in a sled powered by nothing more than gravity, reaching speeds in excess of 120 miles per hour. The times of four individual “heats” are then combined to calculate the final score. In this Games there are six events, beginning February 16th and ending on the 23rd. Germany is historically the dominant country in the Olympics, but the USA has done well in recent years, as in Vancouver in 2010.

Originating in medieval Scotland but most strongly established and popular in Canada, this curious form of boules on ice involves two opposing teams with four players each which take turns sliding heavy polished granite discs across an ice rink (called a curling sheet) toward a circular bullseye, with two team members using specialised long-handled brooms to sweep in front of the stone as it travels, thus influencing its trajectory and speed (the term “curling,” by the way, refers to the way the stone travels across the ice). Each team has eight stones, and the highest score goes to the team with the most stones resting closest to the target (or house). It has been an official (as opposed to exhibition) sport at the Olympics since 1998 in Nagano, Japan.

The way the curling Olympic competition works is that 10 teams (divided into men’s and women’s divisions) compete in a round-robin format in preliminaries, then semifinals – the winners of which square off for the gold medal. The losers of the semis play for silver and bronze. The round robin has been underway and will continue through the 17th or 18th, followed by the semifinals on the 19th and finals on the 20th and 21st.  Teams to watch this year include both sexes for Canada, Great Britain, and Sweden, plus China women’s and Norway men’s (if nothing else because they have decided to spice up the normally nondescript wardrobe of the sport, following up some 2010 flash in Vancouver with this year’s Norwegian-flag-patterned trousers). Originating in the Swiss Alps in the 19th century, the luge is a  small, fast, fiberglass sled for one or two people lying face-up and feet-first with head slightly raised, zipping down a banked track, minimally steering by applying pressure against the steel runners with the thighs and shifting the shoulders. Lugers (referred to as sliders) can reach speeds of 95 miles per hour. If you think all this sounds dangerous, well, you’re not wrong. Luge already made the spotlight in a bad way in Vancouver 2010 when a young Georgian was killed during a training run, in the first fatal accident in the sport since 1969.

Thankfully, no mishaps so far this time. Germany and Austria are the among the biggest luge powers of note, and in fact in the only event as of this writing, in the men’s singles the gold was claimed on Sunday by 24-year-old German Felix Loch, repeating his success from Vancouver (a Russian nabbed the silver, and the bronze went to Italy). The women’s singles, as well as the doubles and team relay, are all set for this week.

Also rooted in the 19th-century Swiss Alps, the skeleton is a sledding event like the luge except that the sliders go face down and heading straight ahead, and the speeds not quite as high – maybe about 75 miles an hour instead of 95. Each slider completes four runs over two days (two on each day), with the winner having the lowest aggregated time. It’s been an Olympic sport since Salt Lake City in 2002.

The USA, Canada and the UK have dominated in the sport in recent years, and the Yanks and Brits are favoured to do so again in the two days of heats taking place this Thursday and Friday February 13-14 – though in fact it’s a pair of brothers from Latvia, Martins Dukurs and Tomass Dukurs, who are favoured to take the gold and silver for the dudes. Incidentally, one fashion note: The skeleton crew, as it were, will be making its mark visually with their helmets, decked out in kick-arse colours and symbols, whether national flags or other imagery (including Ander Mirambell of Team Spain, with squiggly geometric designs in the red and yellow shared by the flags of both Spain and his native Catalonia)

That’s all for now — enjoy the games!