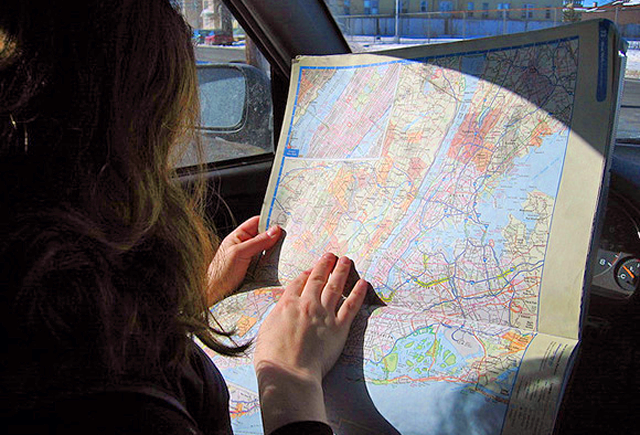 Even with all the signs and signals on the roads and motorways, all of us have at one time or another gotten lost whilst driving. It would be natural to imagine, therefore, that in the vast expanse of the sky it would be quite easy to get lost without any signals for guidance. However, the fact is that there are indeed signals up there to rely upon.

Going back to the early days of aviation, it’s true that the intrepid pilots of the day did have to rely upon navigation by sight, seeking out cities, roadways, or geographical formations, with the aid of little more than a compass. Despite today’s fancy technology, flying by sight remains to this day every pilot’s core navigation skill, and he or she starts training by learning to apply visual flight rules (VFR) as a critical Plan B, should all other systems fail.

Of course, things get further complicated in bad weather or at night, so at a certain point a dedicated navigator was needed to take charge of calculating important factors such as position, velocity, route, wind speed (a process known as dead reckoning), so that the pilot could focus on actually flying the plane.

In any case, before long the first navigation aids made their appearance in the form of radio signals emitted from stations whose positions were reflected in aeronautical charts. In this fashion, thanks to the on-board receiver which indicates the direction of a given station, it’s possible to trace routes between them regardless of whether it’s day or night, cloudy or clear. 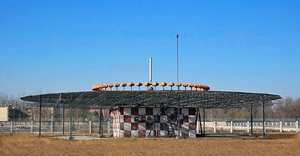 Furthermore, tracing routes to two or more of these stations, it’s then possible to calculate the position of the aircraft because it coincides with the point at which the routes cross (the more stations involved, the greater the accuracy). These early radio direction finders were eventually replaced by a system called VOR (VHF Omni Directional Radio Range) which was similar but more precise, and which is the prototype for the radio assistance equipment most in use in world aviation today.

The majority of VOR stations incorporate additionally a  DME (distance measuring equipment) system, which if an aircraft carries aboard the necessary instruments allows the crew to determine at all times its position just by receiving a signal from one of the stations.

In recent years, besides, increasing numbers of planes are equipped with GPS receivers, augmented in precision in Europe since 2009 by a satellite- and ground-based system called EGNOS (European Geostationary Navigation Overlay Service). Thus if VOR/DME has a precision of 900 metres (2,953 feet) and GPS of 9 metres (29.5 feet), with EGNOS it’s two metres (6.5 feet), therefore the more widespread this system becomes, the better use can be made of existing airspace, since as a result, less redundant margin of separation between planes in the air is needed; this is especially welcome at airports with high traffic and in areas with particularly congested air corridors such as those over much of Europe.

As a backup to VOR and GPS, aircraft incorporate an inertial navigation system (INS), which thanks to onboard sensors which detect ascents and descents, turns, accelerations, and other movements, constantly calculates position without receiving any external signals. 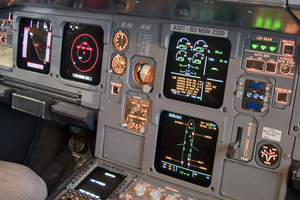 It should also not be forgotten that thanks to radar and radio, ground-based air traffic controllers are able to see the big picture of the positions of all the aircraft within their zone of responsibility and will also do their part to keep pilots and navigators on track. With all of this, flight crews have more than enough resources at their disposal to monitor their position at all times, but this doesn’t mean that they can fly through the air willy-nilly.

When planning a route from one airport to another, the first priority is to establish a flight plan which defines the passage of the aircraft through a series of determined waypoints on air navigation charts, known as “fixes,” with designations formed from five letters which are fairly easy to remember (and sometimes even whimsical, depending on who’s doing the naming), such as  WOLVS, TURBO, and PESTO. In addition to the fixes, routes can also include radio navigation aids, whose names have three letters on charts – such as for example VES, the VOR/DME designation for Asturias in northern Spain.

Also, in order to reach one of these points, a plane follows an airway, which is like a road in the sky between two or more waypoints. These airways have names which are a little less creative than the fixes, such as UN733, which covers Spanish airspace from HIDRA, in the northeast of Galicia, across the NDB station of Santiago de Compostela, crossing the entire Iberian peninsula via other fixes, leaving land via the NDB over Valencia, ending up at BASSO, above the island of Majorca.

Thus a flight path between two airports is never going to be precisely the shortest route, especially in an airspace as heavily trafficked as Europe’s. Routes preset by an airline’s operations department will be used repeatedly whenever possible (taking into account adjustments for weather and other factors). Thus a flight from A Coruña to Madrid generally follows the coordinates LECO.FORN1C.FORNO.UN733.ZMR.ZMR3A.LEMD 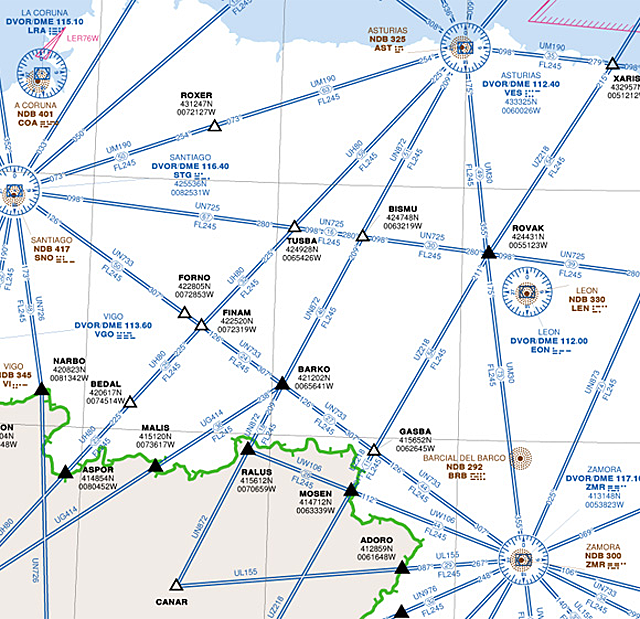 This connects the airport of A Coruña in Galicia (LECO) with Madrid (LEMD), passing over FORNO, a fix situated over Monforte de Lemos (also in Galicia), and ZMR, the NDB of Zamora, travelling between the two waypoints via airway UN733.

The flight plan also specifies the procedure for reaching FORNO from A Coruña airport, using the departure point FORNO 1C, as well as how to get from ZMR to Madrid airport, using arrival point ZMR 3A.

Fixes, in effect, are quite comparable to traffic signals we encounter on ground roads, with air traffic controllers analogous to traffic cops.  With all of these systems and safeguards in place, you can see it’s not so easy to get lost even up in the wild blue yonder.

This entire process, tremendously simplified here, is part of a larger régime known as instrument flight rules (IFR), which specify not just how to get from place to place but at what altitudes, protocols for detouring to alternative airports, and so forth. But all that, dear avgeek, is for another blog post.