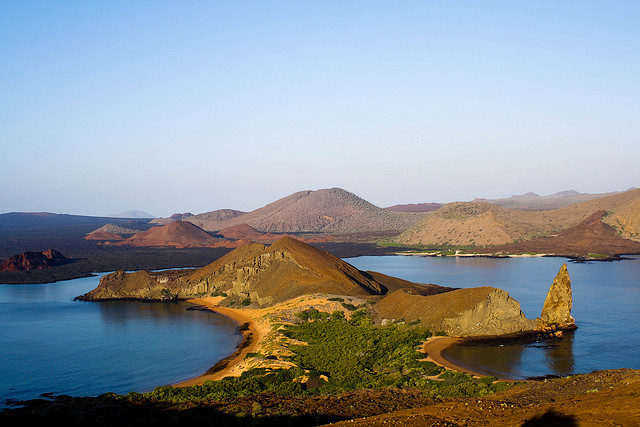 Perhaps one of the things that most surprised me about the Galapagos is the nonchalance with which the local species still receive human visitors. To this day, the great majority of these islands is unpopulated, and in this largely pristine territory it’s mostly iguanas and sea lions who are your hosts on these shore excursions in the footsteps of Charles Darwin.

In fact, a sea lion was precisely the first creature I encountered upon arrival at the island of Baltra, as it lay on the dock where seaplanes arrive from Quito and Guayaquil, trying to take a nap. Passing by to board the panga (motor launch) that would take my group toward the expedition ship Legend, it seemed sleepily unconcerned as we trooped by mere inches away. 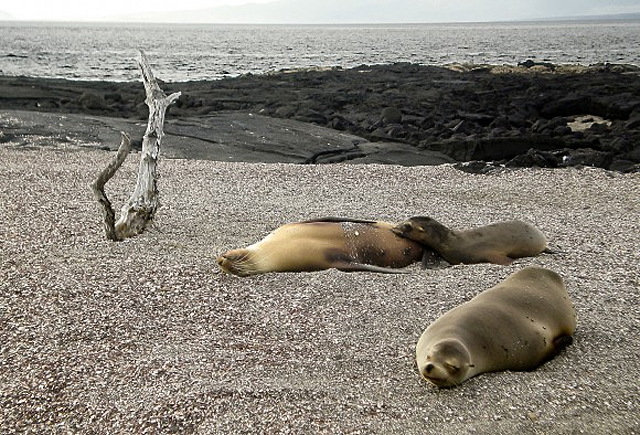 From that moment onward, the nearly four days touring a portion of this archipelago of dozens of islands and islets was divided between walks on land and snorkeling offshore, my only human contacts my shipmates, because except for the town of Santa Cruz, no one lives on any of the islands we visited but for playful sea lions, huge tortoises, stolid iguanas and an extraordinary variety of birds – various types of finches, the curious blue-footed boobies, flamingoes, unexpected penguins, and other species such as cormorants, pelicans, frigatebirds, and albatrosses which seemed to shadow us all along the way.

The ancestors of these same animals were in all likelihood the hosts of Darwin when he arrived here in 1835, when he famously noticed the diversity of the species he observed, and especially the differences between the local finches and those he had seen in other parts of South America. It was the study of these finches that led to the formulation of his history-changing theory of evolution and natural selection.

One of the first lessons you learn upon arriving in the Galapagos is to respect the denizens of these islands, that you need to maintain a proper distance so as not to invade the animals’ space, nor should you feed them. Another very good thing to know is that you enjoy the experience much more in silence, with only the sounds of nature around you. Every day our guide would make a point of allowing us periods of total tranquility, the better to appreciate the songs of the finches, the beating of wings, the hum of the insects, and so on.

My first landfall was at Bartolomé Island, just 297 acres (120 hectares) and home to a small colony of penguins – which took me by surprise, as I’d thought they could only live in cold climates. If you climb 365 steps carved into the lava up to the island’s highest point, you’re rewarded with one of the Galapagos’ most iconic panoramic views (above), of Sullivan Bay, which separates this island from Isla de Santiago, with its “Pinnacle Rock,” a great cone-shaped shard of volcanic tufa rising out of the sea. The calm waters offshore here are also great for snorkeling, and if you’re lucky you might even come across some manta rays.

The much larger (1,790 square miles) Isabela Island is where you’ll find the galápagos (giant tortoise) of the Galapagos, which inch down from the highlands in search of food with astounding slowness. They’re so huge that four people could fit comfortably on top of an adult’s shell, yet they can pass you by devouring underbrush without making their presence known. Another of the curious local species: iguanas of an almost golden hue, whose intensity reveals the males’ degree of virility.

Right next to Isabela, Fernandina Island is the youngest of the archipelago, and as the saying goes, “barren of soil, but rich of seas.” Despite its mostly rocky surface, it still manages to support tons of grayskinned, salt-spitting iguanas, cormorants, and marine iguanas who coexist with multicoloured crabs. Oh, and a whole lot of sea lions. Some I saw frolicking in and out of a natural pool, while off to one side was a pregnant female with a calf which while old enough to fish still wanted to suckle. We even spotted a pair of males embroiled in a fight for dominance over the colony. Contemplating it all was a long-necked white crane, which even seemed to parade around calmly for our cameras.

One of the most notable features of Santiago Island is the contrast between its black-lava cliffs and its white-sand beaches. The concentration of marine iguanas is tiny, but you will find in residence a species called the Galapagos fur seal, distinguished from regular seals by its whiskers as well as its very dense, grayish brown coat. Santiago is especially appealing for birders, who will spot not just finches but hawks, falcons, herons, oyster catchers, and many more. 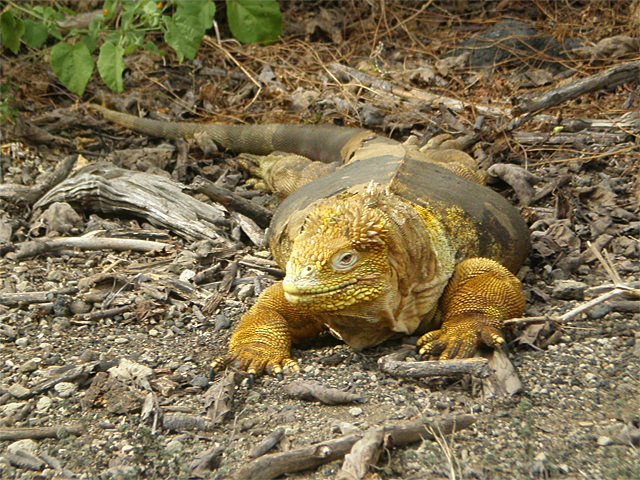 Rábida is distinguished by its reddish cliffs and sand beaches. It’s also rich in fauna, including sea lions which romp off its extensive beaches or lounge in the shade of its cliffs; flamingoes stalking the lagoon; pelicans glaring down at us from the cliffs; and for me one of the trip’s biggest surprises, blue-footed boobies atop the rocks defying the afternoon chill. So they exist! Yes, there is in fact a species of bird with feet so brilliantly azure that they match the depths of a pool. And furthermore, if you hop into the chilly waters off Rábida for a bit of snorkeling, you’re sure to easily come across not only sea turtles but possible even a white shark.

On Santa Cruz Island (381 square miles), you’ll find Charles Darwin Research Station, headquarters of the scientists and conservationists working to study and conserve the Galapagos, and though obviously it’s not the same as observing them in the wild, here you can see many giant tortoises. The island is also home to the town of Puerto Ayora (pop. 12,000), where you can grab a drink, meal, or a spot of shopping.