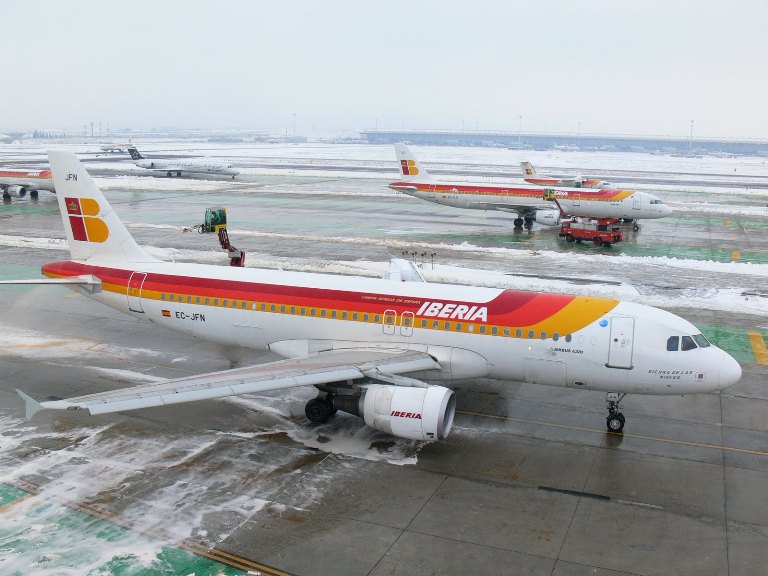 It’s that time of year again, with snow swirling and ice crusting all over the place. Anyone who’s flown into or out of cold climes in winter has no doubt seen de-icing teams and equipment in action, removing snow, frost, and ice from aircraft fuselages.

De-icing season varies throughout the northern hemisphere, of course, but in Spain it stretches from November 1 through March 31. Teams consist of several trucks which carry supplies of 5,000 litres (1,100 gallons) of a water-glycol mixture, along with a boiler with a burner that heats this liquid to 82° Centigrade (180° Fahrenheit). Pumps installed in the trucks pressurise the liquid enough to allow it to shoot out the water cannons with a force sufficient to reach the fuselage and melt away any solid residue that would impede flight, with the glycol acting to retard additional ice buildup going forward.  An orange colorant is added to the liquid to allow ground crew to visually ascertain that the correct amount of surface is being covered.

De-icing is done upon the request of the flight captain, and does not always include 100 percent of the aircraft’s exterior. Surfaces normally de-iced include all vertical and horizontal planes (wings and tail), fuselage, radar dome, landing gear hatches, and stabilisers. In extreme weather conditions, however, the entire exterior surface may in fact need de-icing.

The process is carried out scrupulously according to the manuals issued by the aircraft manufacturer and regulations of industry bodies including the IATA (International Air Transport Association) and ISO (International Organisation for Standardisation). 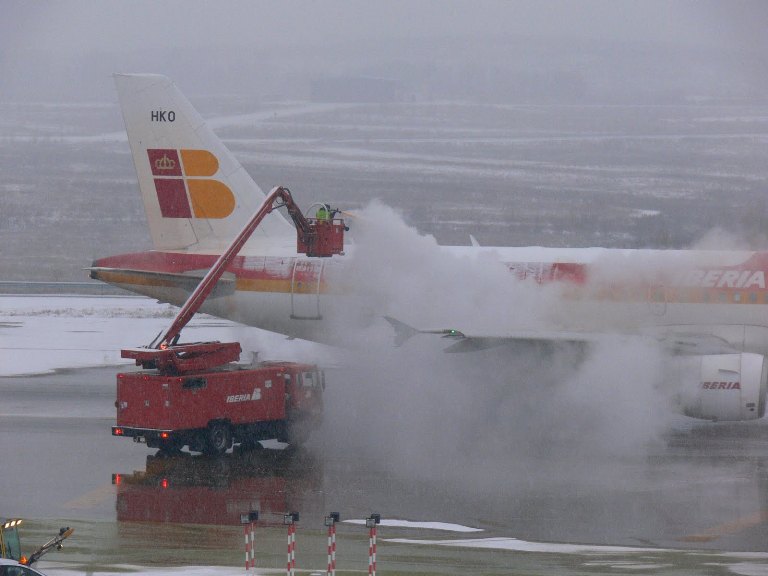 The time needed for de-icing can vary between as little as three minutes to an hour or more – tending more toward the shorter end of that spectrum, between three and five minutes, in the case of ice and frost. It’s when there’s snow to deal with, as well, that de-icing times can rise to an hour or more.

At Madrid-Barajas Airport there are two de-icing bases which are activated 24/7 during the season. Each is under normal conditions capable of de-icing three aircraft simultaneously. At full throttle, these platforms can de-ice more than 150 airplanes each under normal weather conditions.