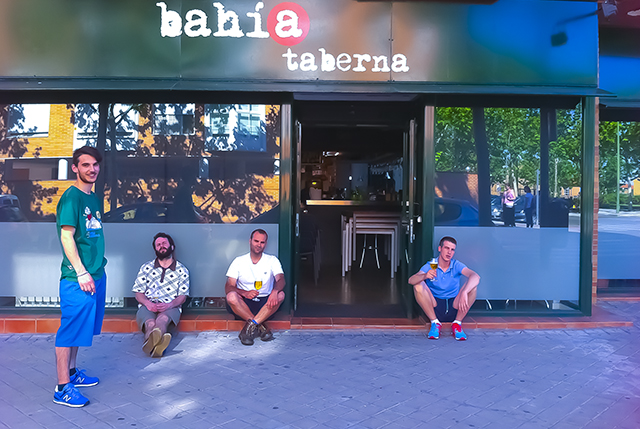 Madrid’s Barajas Airport these days boasts a bazillion scrumptious airport restaurants for foodie travelers, and given the typical rush of a travel day, most of us succumb to their convenience. Whenever possible, though, I also like to support small independent businesses, and recently I discovered a very cool option out near the airport that if you have any time just before your next flight out or after arrival in Spain’s capital, I highly recommend. It’s called Bahía Taberna. 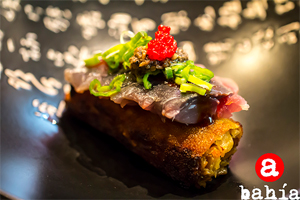 Mind you, I might just be the world’s biggest fan of traditional Spanish tapas, but when I’m in the mood, I’m also plenty jazzed by the contemporary twists that younger Spanish chefs have beef giving them in recent years. And in this mod little Campo de las Naciones neighbourhood space, head chef/owner Daniel de la Fuente Vangoni and his team work wonders with goodies like the mackerel roll (rollita de caballa, right) or a little bit of business Daniel calls ‘squid pizza’ (pizza de chipirón, which nabbed the creative cuisine prize at Madrid Fusion culinary festival in 2012). They give desserts the same treatment, from apple pie to tiramisù, and it’s all served in a fun, quirky environment where the unexpected rules the day. Tasty stuff indeed, and certainly not something I would have expected so close to a runway!