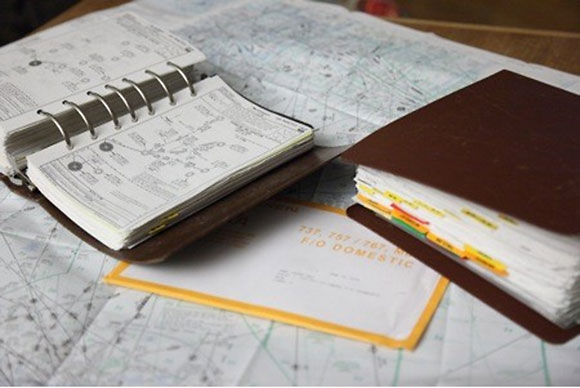 As a fan of contraptions of various sorts, I’m always curious about the stuff other people carry around, and every once in a while I’ve shared a few shots of this type on Flickr. That’s why I especially liked a Q&A I saw a while back called Plane Answers: What’s Really In a Pilot’s ‘Kitbag?’ Answered by Kent Wien, a Boeing 757/767 pilot for American Airlines, who lays out in eye-opening detail what he and his colleagues are carrying around in those briefcases we see them lugging onto and off of our flights.

Current AA regulations stipulate they must carry the following:

In addition to all this, Kent carries a so-called Trip Book, which is optional but he says makes his life easier. It includes the Jeppesen approach charts for the airports he’s most regularly flying in a given month; the normal procedures checklist; an RNAV approach guide (RNAV being a backup navigation system); and a procedural reference guide in case computers are down as we prepare for departure.

And we’re not done yet! This bag also includes a headset with microphone (most pilots prefer to buy their own rather than use the ones supplied by the airlines), a compact camera, and often a bottle of water.

In recent years, Kent reports, American has been allowing its pilots to carry what it calls a Class 1 Electronic Flight Bag – basically a laptop (in Kent’s case a MacBook with a charger and extra battery), loaded with the MEL and company manuals in PDF format. So that allows a bit of space savings there. 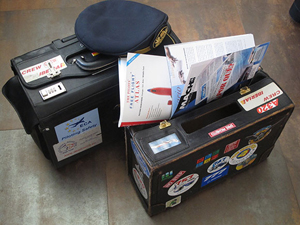 Knowing all this, I of course had to ask the pilot of an Iberia A320 what he carries in his kit bag – and was surprised to learn that there are no specific regulations on the matter.

This is due basically to the fact that the aircraft manuals and navigation charts are always onboard, as it is the responsibility of the maintenance crew to keep them current. Also aboard at all times is the aircraft’s Green Book, which contains flight records and accumulated hours, as well as the flight records, where details on each flight are noted, and so forth.

The rest is up to each individual pilot; in the case of the chap I spoke with, that usually includes the following: 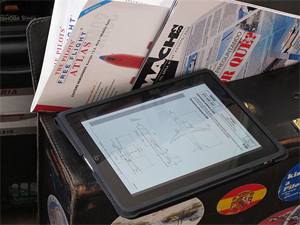 Finally, one tool he considers absolutely essential is an iPad loaded with all the aircraft and company manuals and bulletins, as well as relevant documents from bodies such as the ICAO (International Civil Aviation Organisation) and IFALPA (International Federation of Air Line Pilots’ Associations); other colleagues opt to carry these on laptops.

Naturally, this iPad also has plenty of non-work apps and programs, too, such as music and movies for layovers or flights he takes as a passenger rather than a pilot.

Whew! And I thought I lugged a lot of stuff around…