Spanish cuisine has deservedly gotten a lot of attention in recent decades, as have design and modern architecture in Spain. So why, I wondered as I gazed about me at an elegant, animated crowd lapping up this brand-new exhibition in the Design District of Miami, Florida, have I noticed so little about design and the culinary arts?

Here to fill that sweet spot, this 8,000-square-foot exhibition opens free to the public in Miami November 8 through December 15. Sponsored largely by a government of Spain outfit called Spanish Cultural Action (Acción Cultural Española) with an assist from several other organizations, it’s the latest in a busy, busy, busy series of events and programs being staged here in the USA to commemorate the 500th anniversary of a moment that changed North America forever: the arrival in Florida of explorer Ponce de León (he of fountain of youth fame). ‘Tapas’ will then hit the road, first to Washington DC (January 23-March 23, 2014) and another U.S. city still to be determined, then onward to other great world metropoli including Mexico City, Sao Paulo, and Seoul (it’s already been to Tokyo). 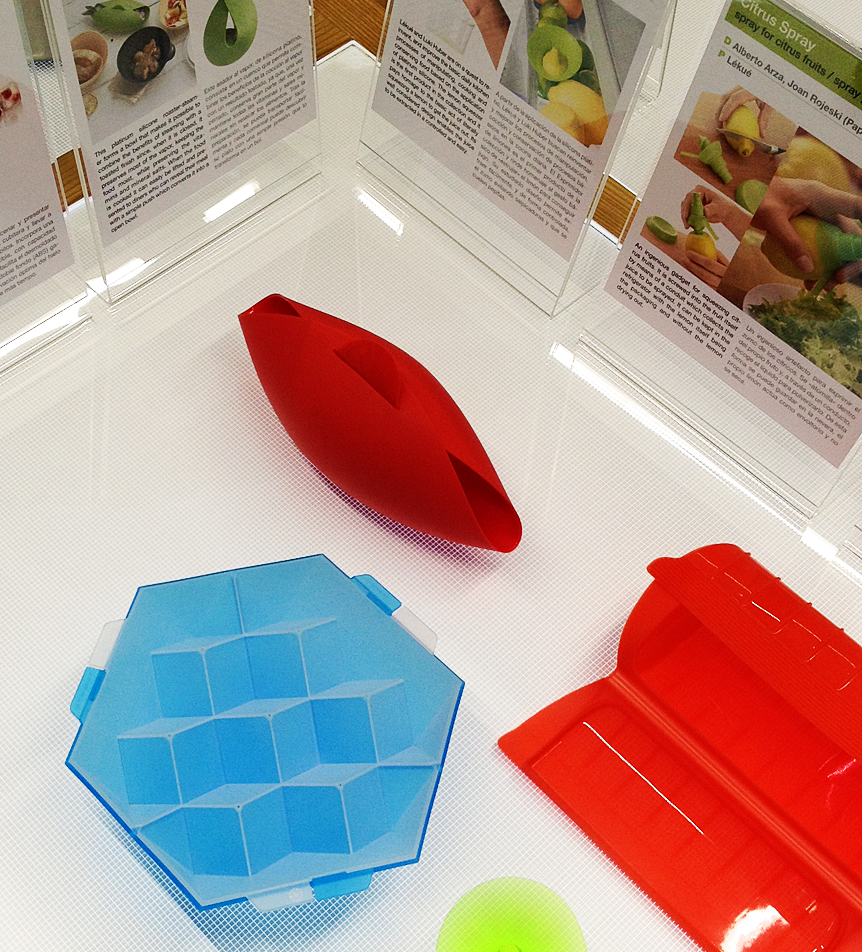 As curated by Barcelona architect/designer Juli Capella, this exhibition is an informative yet often surprisingly fun look at a mix of Spanish cuisine; winery and restaurant  design; utensils and other objects used in dining; and kitchen gadgets, mostly with a quirky twist, such as the ultra-mod steamer and other neat stuff by Lékué (above). Several chefs and restaurants take center stage: naturally, Ferrán Adrià and his iconic (and sadly now closed) El Bulli; Mugaritz in the Basque country; and the restaurant currently acclaimed as the “best” in the world, Catalonia’s El Celler de Can Roca. 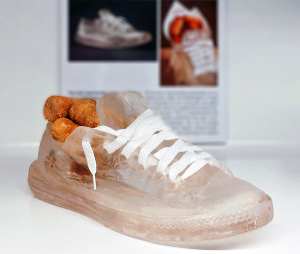 Highlights for me include exhibits explaining some aspects of molecular cuisine (like cocktails in the form of cakes and gelatin); cool dinnerware (one set of plates imitating bamboo leaves, for example); cutting-edge tech like a “food printer” and a system that identifies food items for the blind; and modern takes on old Spanish wineskins and water flasks. There are also dollops of playfulness liberally sprinkled throughout. The first thing that greeted me upon entering was one of my favorite flicks – Carmen Maura spiking gazpacho with sleeping pills in Pedro Almodóvar’s riotous 1980s classic Women on the Verge of a Nervous Breakdown (part of a projected montage of Spanish movies depicting food).  Then it was on to a chandelier and a birdhouse made out of bread; a bib made to look like a tuxedo; croquettes served in a clear resin sneaker by star chef José Andrés (right); and a jokey display of cured “Serrano ham” dubbed “crisis hams” (due to the current bad economy in Spain, they’re plastic rather than actual swine flesh).  And speaking of fun, I was surprised, to say the least, to learn from another display that the logo of an iconic Spanish lollipop, the Chupa-Chup, was designed by none other than extravagantly mustachioed Surrealist artist Salvador Dalí. It must be one of his mildest designs ever, but still…who knew? Hello, Dalí!

Finally, various events within the event are also scheduled in the coming weeks, including workshops, lectures, film screenings, and art happenings, some of these based at the nearby  Spanish Cultural Center, one of the co-sponsors of “Tapas – Spanish Design for Food.”

A fun and enlightening visit indeed, highly recommended. My only gripe: after teasing us with all these tempting Iberian edibles, I was more than ready for some actual Spanish food! No problem: off I toddled to restaurant Tapas y Tintos, not far off. No plastic ham here, thank goodness.