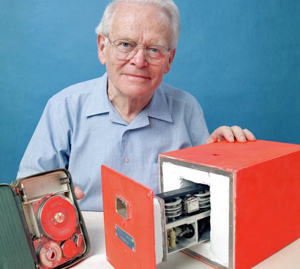 In 1958, an Australian mathematician, chemist, and aeronautical research scientist named David Warren (right, with a prototype) came up with an invention based on a brilliant idea: recording all the conversations of a flight’s cockpit crew with each other as well as with air traffic controllers, so that in the event of an accident, investigators could use this recording to clear up doubts as to the cause. Amazingly enough, world aviation authorities at first showed little interest, but after Australia made it compulsory in 1960, more countries gradually came on board, and today the use of the “black box” flight data recorder (also known by acronyms FDR and ADR) has become virtually universal.

ORANGE IS THE NEW BLACK

It should be said that the “black” part is a misnomer, because the recorder housing is actually orange, a color which makes it much easier to spot amid the chaos of wreckage. Installed in the tail of each aircraft, the recorder is insulated and protected by aluminium and dry silica layers surrounded by a thick stainless steel housing that has been tested to withstand intense heat, deep-sea submersion, and other forms of trauma that can occur as a result of an air crash, including:

• Fire temperatures in excess of 1,800° Fahrenheit (about 1,000° C).
• Submersion in pressurised seawater
• Striking an aluminium wall at high speed with an impact force of more than 7,700 pounds (3,500 kilos)
• High-pressure crushing
• Penetration resistance, by dropping a 500-pound (225-kilo) weight with a pointed tip onto the device from a height of ten feet (three metres).

WHAT DOES A BLACK BOX RECORD? 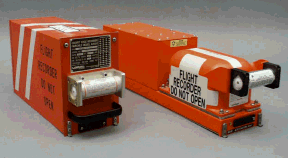 Recorded data include flight parameters including speed; precise times at which all flight operations have been performed; turbulence during flight; all flight altitudes; and up to 60 more. With respect to audio, not only cockpit conversation between pilots is recorded, but also sound in the passenger cabin, via a ceiling microphone. In some of the larger aircraft models there are two separate black boxes, one for voice recording and the other for all other data.

Depending on the type of aircraft and FDR, the data stored cover the last 30 minutes or the last two hours of a given flight, and units are now equipped with independent backup power sources, so that even if an aircraft loses power the unit can continue recording during what is after all the most crucial period of any flight emergency.

Over the years, flight data recorders have of course been instrumental in improving air safety, yielding among voluminous research data the interesting findings that 38 percent of air accidents occur during takeoffs and another 26 percent during landings.

And going forward, FDR’s are being tested to record entire flights, using the Internet to transmit to airline control centres data fragments every 30 minutes or even continuously in real time — a continuing and ever-evolving boon to aviation safety for all of us.