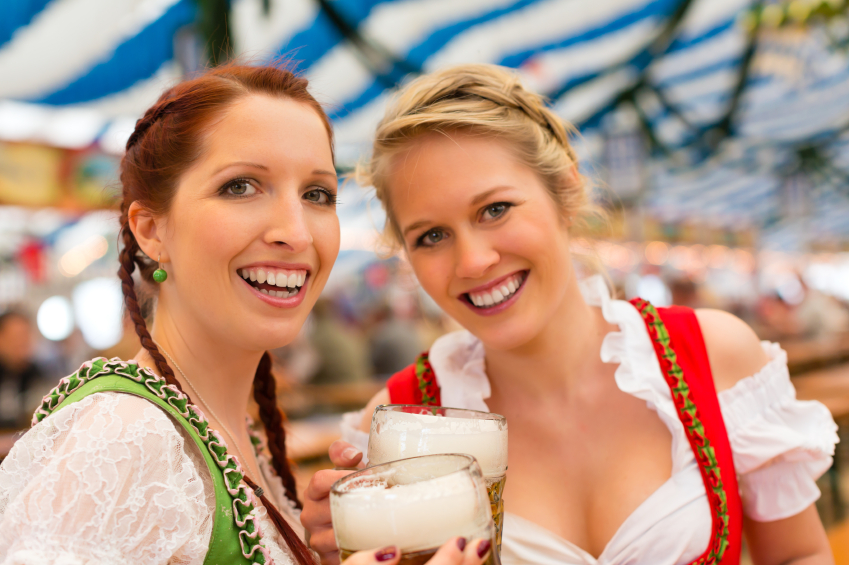 Ja, it’s that time of year again: the 180th edition of one of the world’s most famous parties, Oktoberfest in Munich, Germany, has been underway since September 21 and comes to a soggy, beery finale this coming Sunday, October 6 (the 2014 dates are Sept. 20-Oct. 10).

Theresienwiese, the fairground where Oktoberfest is held, occupies 31 hectares (77 acres) west of Bavaria’s capital. During the festival, it holds 12 giant tents and a central avenue with entertainment of every kind, including fairground-type attractions (a giant ferris wheel, an aerial merry-go-round…) for the whole family to enjoy during the day.

But the essence of the festival happens within the Festhallen (festival tents), including those of the city’s six authorised breweries, whose brands are the only ones on sale. The largest is the Hofbräu tent, where up to 10,000 can drink, eat, sing and dance to endless oompah tunes. Workmen start setting them up in July because that’s how long it takes to prepare their vast infrastructure. The Festhalle with the oldest tradition is that of Schottenhamel, which never missed a festival since 1867 (except, understandably, during the two world wars). Another famous one where many German celebrities like to be seen (such as the footballers of Bayern Munich), is the Hippodrom, its name deriving from the fact that in the early years Oktoberfest actually ended with a horse race.

The cost of drinking in one of these tents starts at about 27 euros, which includes two litre mugs of beer and half a roast chicken. If you can’t get through two litres of suds, you can always swap one stein for more food, such as the typical Weisswurst (white veal sausages served with sweet mustard), the traditional Brezel pretzel, or maybe a succulent Schweinshaxe (pork knuckle)—all dished out by efficient waitresses at breakneck speed. 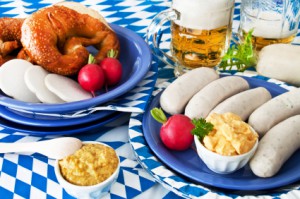 The ﬁrst Oktoberfest was held in 1810 to celebrate the marriage of Prince Ludwig of Bavaria and Princess Therese of Saxony in October of that year; later on, its start was pushed forward to the third weekend in September, when the Munich weather is usually lovely. And historic pageantry is also an integral part of the festivities. The whole city pours onto the streets for the opening Parade of Breweries, in which horse-drawn wagons, led by the mayor and the municipal band, haul the beer barrels to the Theresienwiese. Before this journey, the participants enjoy a snack of weisswürst, washed down with weissbier (wheat beer), and the waitresses also enjoy some refreshment before launching into the intense work that will keep them hopping for 16 days.

One of the most colourful, spectacular highlights is the Regional Costume and Riﬂemen’s Parade in downtown Munich on the ﬁrst Sunday of Oktoberfest. More than 10,000 people, not only from Bavaria but also from European countries that share the Alps, such as Austria, Italy and Switzerland, turn out to march in their native costumes. One of the best spots to catch this as it passes is in front of the beautiful Baroque Theatinerkirche church.

Most seats in the tents are reserved, so it’s not a good idea to arrive late or without a booking. For Müncheners, and Bavarians in general, the Oktoberfest is also a social occasion for which they dress in their regional costumes, complete with feathered and flowered hats. Parenthetically, one possibly handy sartorial signifier regarding the ladies: if the bows on their dresses are worn on the right, that means they’re married or engaged, and if on the left, unattached.

In recent years, traditional Bavarian dress has become fashionable not just for locals but for visitors from all over the world. For the ladies, this means traditional dirndl skirts or outfits in colours like the sky blue of the Bavarian ﬂag. For gents, it involves elegant jackets with the characteristic green Austrian collar, in the style of nearby Salzburg. Even the horses are ﬁtted out with their ﬁnest trappings.

Finally, Oktoberfest is also known for waitresses parading around hoisting enormous litre tankards of beer—the record held by a single waitress is a whopping 17 (though admittedly the lady did have an assist from her ample bosom). Waitress costumes used to be known for their generous cleavages, in fact, but back in the day that  sometimes led to problems with plastered patrons, so it’s therefore now become more common for them to wear more modest outﬁts with minimal cleavage in view.