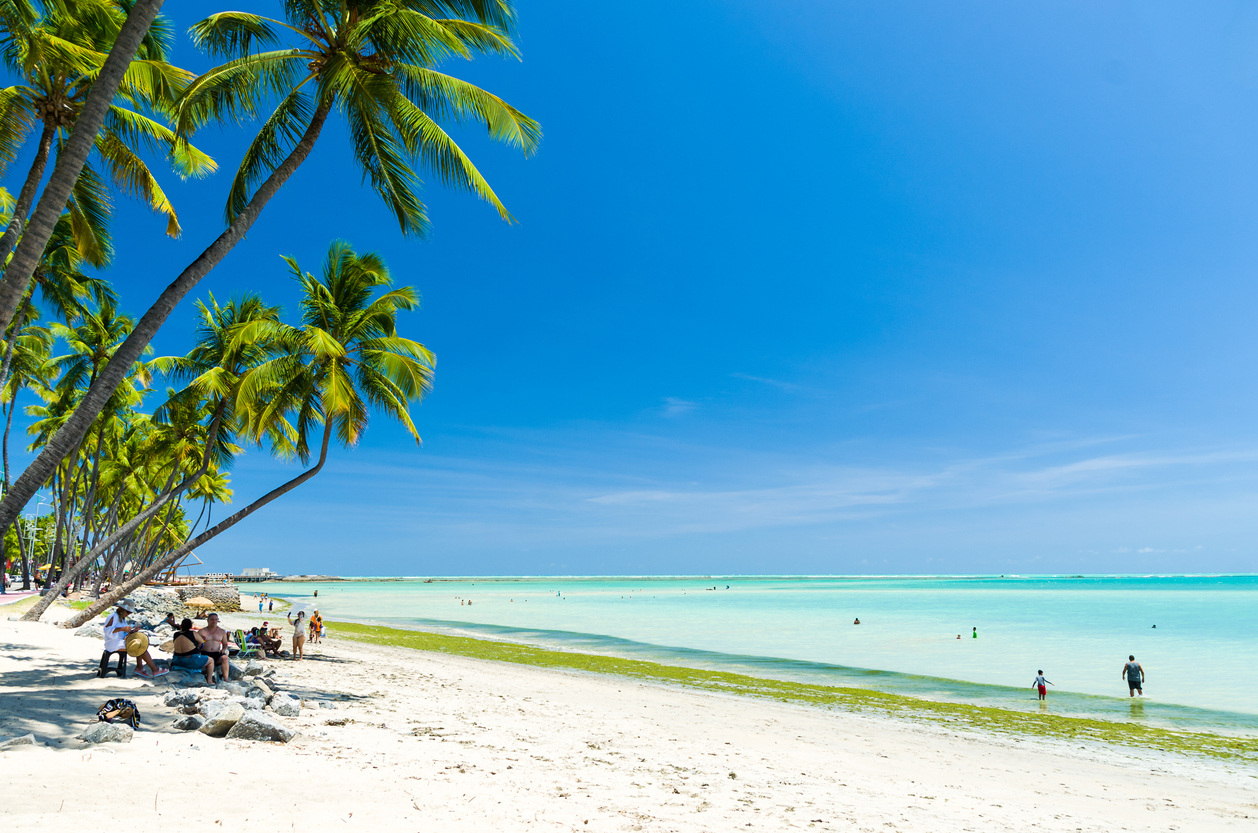 With a staggering nearly 7,500 kilometres (4,660 miles) of Atlantic Ocean coastline, of course my country has no shortage of lovely beaches. Rio de Janeiro strands like Copacabana and Ipanema may be the world’s most reknowned, but many of the country’s most stunning strands and coolest beach towns are actually to be found farther north, along Brazil‘s northeastern coast. So consider an onward flight from Rio or São Paulo to one of these dreamy destinations for a tropical getaway on silky sands this winter, from south to north: 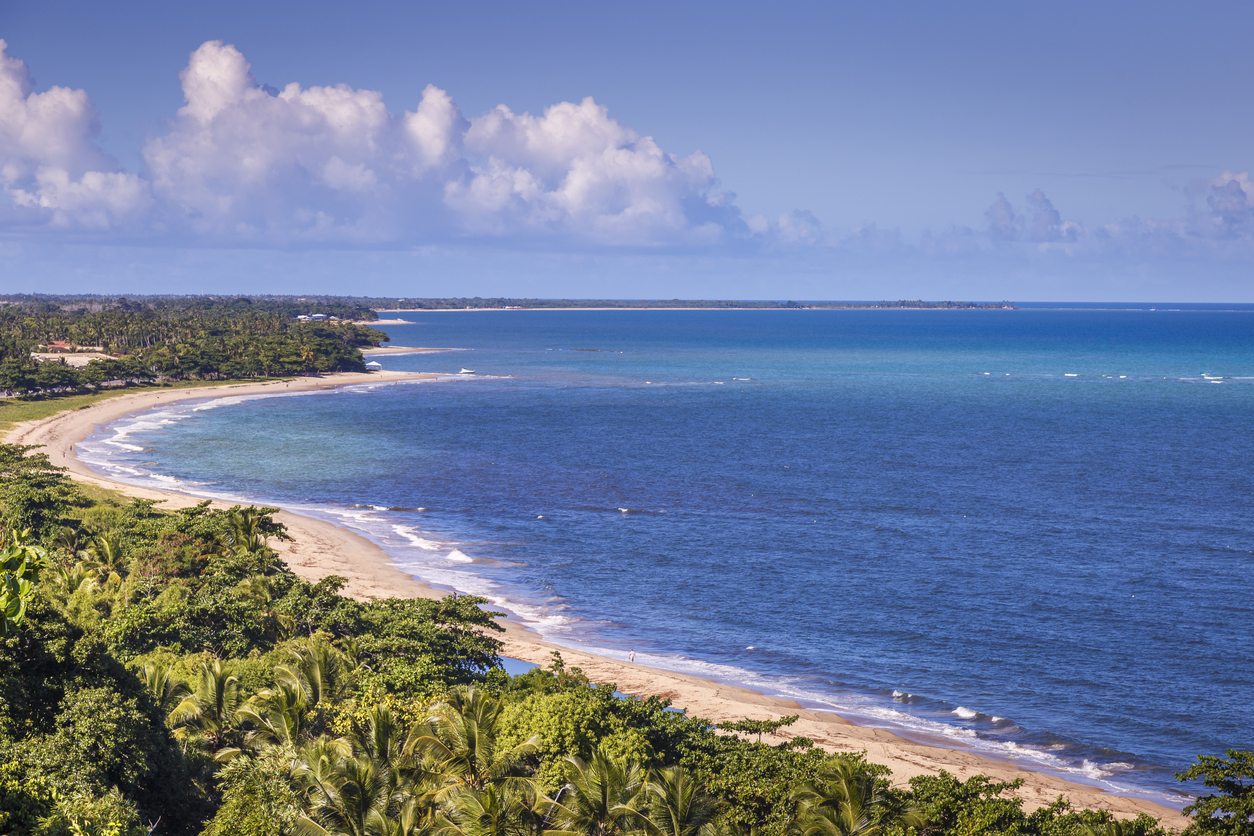 We start off in the state whose atmospheric capital, Salvador, is one of the Americas‘ oldest cities (founded in 1549).  An hour’s flight south from Salvador, the coastal resort town of Porto Seguro (actually where the Portuguese first made landfall, 15 years earlier than the founding of Salvador) boasts some 90km (56 mi.) of shimmering sands and small beach towns. One of the most appealing is Arraial D’Ajuda, a charming and mellow village a 45-minute drive south. Attracting a mix of well heeled South Americans and international backpackers, Arraial boasts a picture-postcard colonial old quarter along with a half dozen pretty beaches offer calm, warm waters; beach stands for food and drink; and water sport options. And at night there’s a lively bar and restaurant scene. What’s not to like? 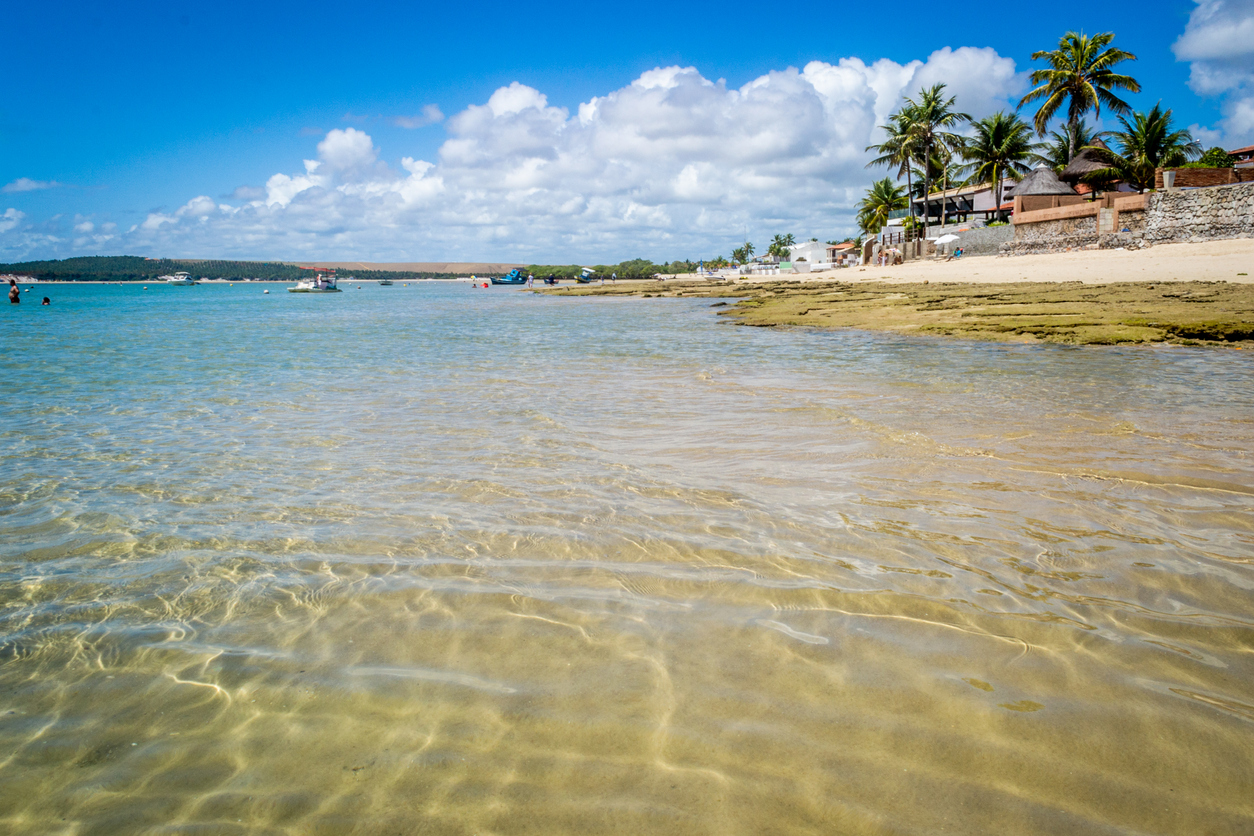 North of Bahia, Brazil’s second smallest state has as its capital the small, laid back city of Maceió  (reachable by air from Rio in five hours). There aren’t a lot of “sights” here per se, but it does boast a truly beautiful beachfront and idyllic shorelines to its north and south. On the latter, the town of Marechal Deodoro, a half hour from Maceió, is home to its own 17th-century colonial old quarter as well as “Frenchman’s Beach” (a legacy of back in the day when Gallic pirates used to come a-calling), another appealing stretch with plenty of beach stands and water sports. Furthermore, it’s got a little something for all tastes – on the left side you’ll find calm, shallow, reef-sheltered waters and natural pools (perfect for families), while to the right the waves kick up a bit, attracting plenty of surfers.

A little farther down the coast (a half hour from Marechal Deodoro and just under an hour from Maceió) this also calm white-sand beach – considered firmly among Brazil’s most beautiful – backs up not against the nearest town of Roteiro, 20 minutes away, but rather a coconut-tree forest and a saltwater lagoon which is also wonderful for swimming and kayaking. There are also plenty of facilities, water sports, and adventure activities here such as ultralight flights (and even a crafts market), and if you’re so inclined, you can also take an ATV tour to the nearby cliffs; they’re not all that high, and pretty easy to climb. 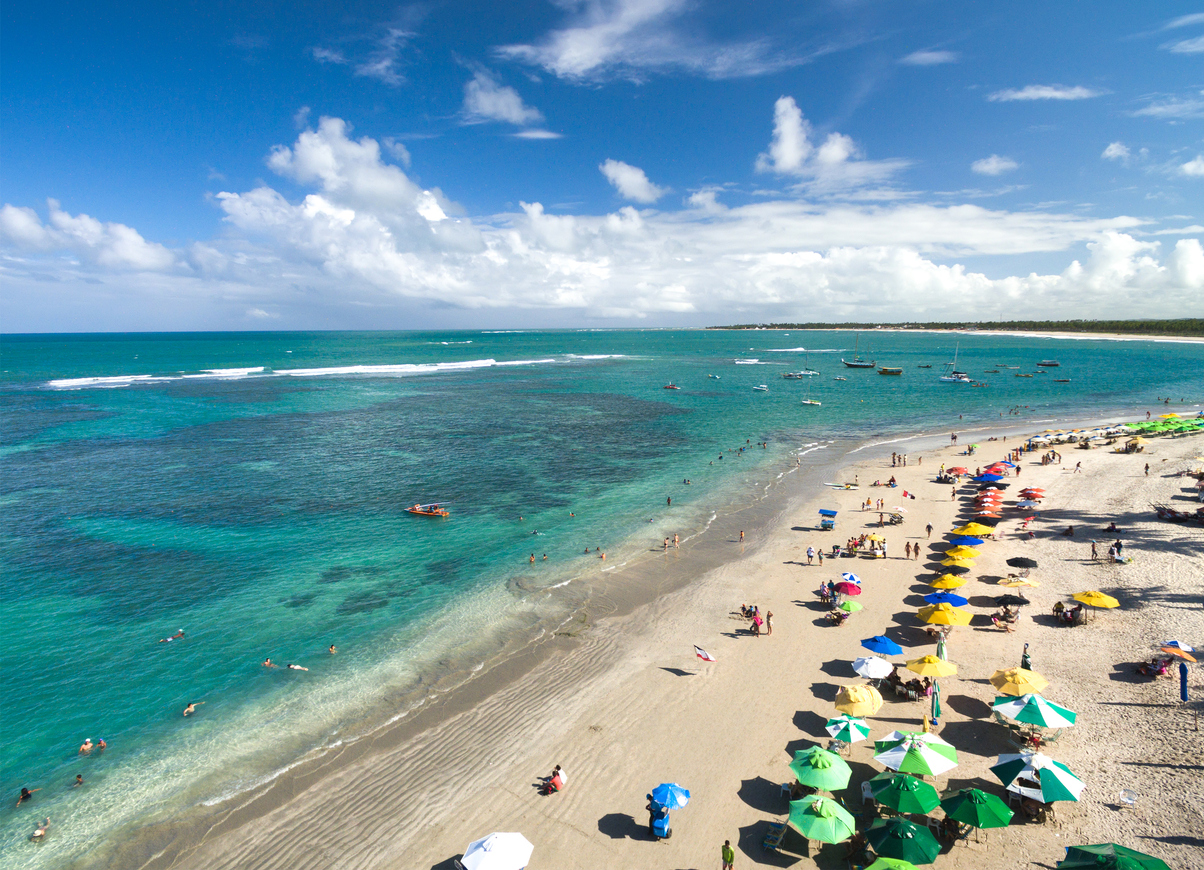 Moving up the coast from Alagoas, Pernambuco is especially known for its sertão (outback, with its own distinct cowboy culture), its dynamic capital Recife, and nearby colonial gem Olinda (whose old town is a UNESCO World Heritage Site). But while much of Recife does exude a pretty beachy vibe, its in-town strand tends to be overcrowded and not particularly appealing to some. Instead, many locals and visitors alike make tracks an hour south to Porto Galinhas, a fetching resort town amid lush greenery and centred around beautiful bright-water beaches that consistently get voted among Brazil’s top of the top thanks to their soft sands, gentle surf, natural pools, nearby hiking trails, and a big choice of accommodation, dining, and nightlife.

The next state up is known for its artisanry and Portuguese colonial heritage, especially in places like Paraíba’s seaside capital João Pessoa (at 435 years, the country’s third oldest city), with one of the world’s highest proportions of parks and green spaces and a UNESCO designation as Brazil’s “creative city” of handicrafts. JP has a nice city beach, Praia Bessa, but there are many other fantastic choices lining the lush tropical coast nearby. One of the coolest and most unusual is right next door in the town of Cabadelo:  Areia Vermelha (“Red Sandbar”) is a sand bank out in the bay – and yes, dark reddish in colour – which emerges only during the mornings’ low tide, at which time take ferries out here from Praia do Poço to splash around, sunbathe, and partake of pop-up refreshment stands. Most definitely a very different kind of beach experience!

Perched on South America‘s northeasternmost tip, this state relies heavily on tourism, and much of that has to do with its 410km (254 mi.) of coastline lines with coconut palms, lagoons, and of course beaches. And one of the best is Pipa, an hour and a half south of state capital Natal, famed throughout (with some fine culture and a historic 17th-century old quarter) the country for its beauty and its crystal-clear sea, along with the cosmopolitan town’s lively nightlife and high-quality restaurants (many of them run by foreign expats). Just be aware that if it’s peace and quiet you’re after, this may not be the place! ? 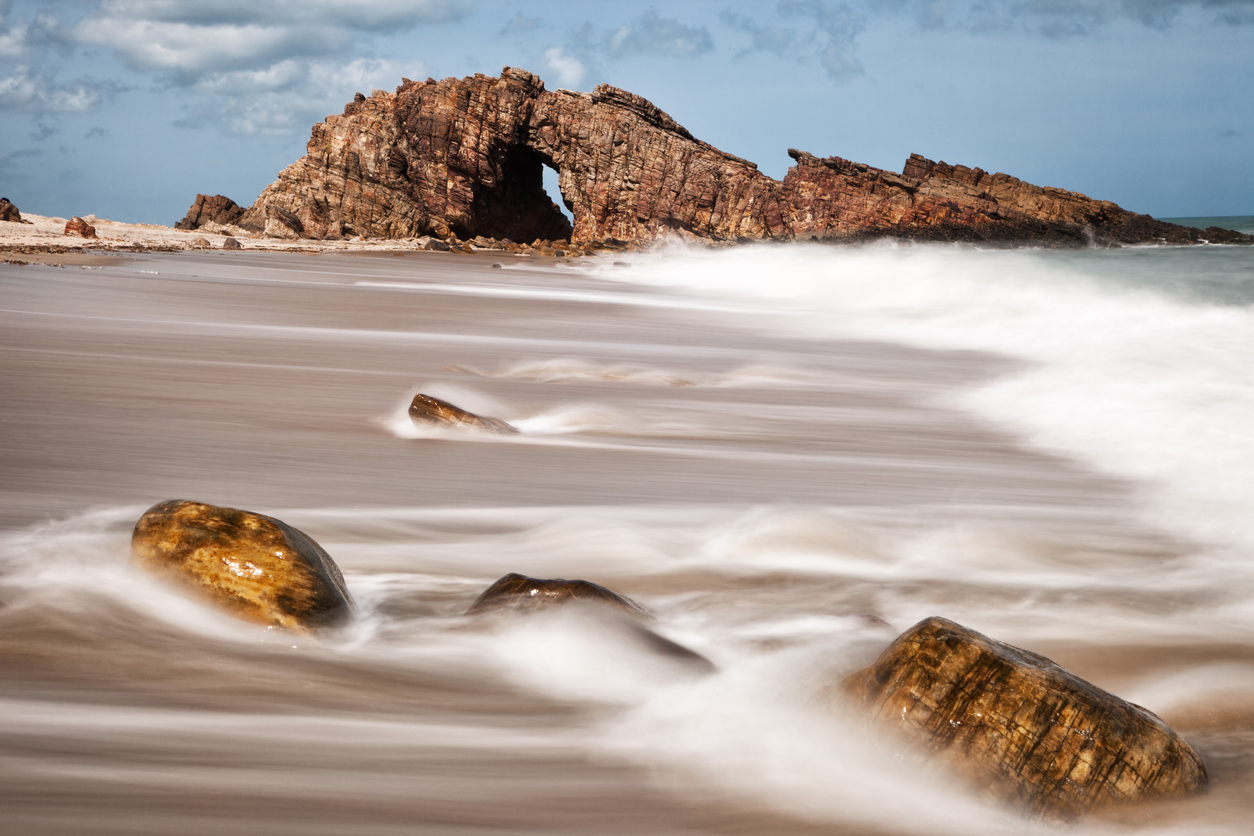 Yep, this one’s a mouthful, all right (it means “lair of the sea turtles” in the language of the pre-Columbian Tupi people, and in fact many just shorten it to Jeri). But especially if you are searching for a bit of the aforementioned peace and quiet, this is surely worth a flight to Ceará‘s vibrant state capital Fortaleza (where if you like nightlife, by the way, you’ll want to spend a couple of nights), then a four-hour drive along the coast to this fishing village – where the streets are still of sand and there are no street lights – turned hip getaway with a hippie-ish vibe as well as a following these days with windsurfers and kitesurfers thanks to the stiff local breezes. The lovely beach here is protected within a national park, and you get here on paths between the sand dunes (jeep tours of the dunes are also available); also don’t miss the local icon Pedra Furada (above), a rocky archway which is especially impressive in July and August when you can watch the sun set right through the opening.

That all whet your appetite for a tropical sun-and-sand getaway in Brazil this winter? Check out Iberia’s great fares (from just 418 euros round trip!) to our Brazilian gateways Rio de Janeiro and São Paulo – see you on the beach! ☀️???️?

Rodrigo Vinagre is a São Paulo-based freelance journalist and social-media manager who loves travel, cats – and of course beaches.