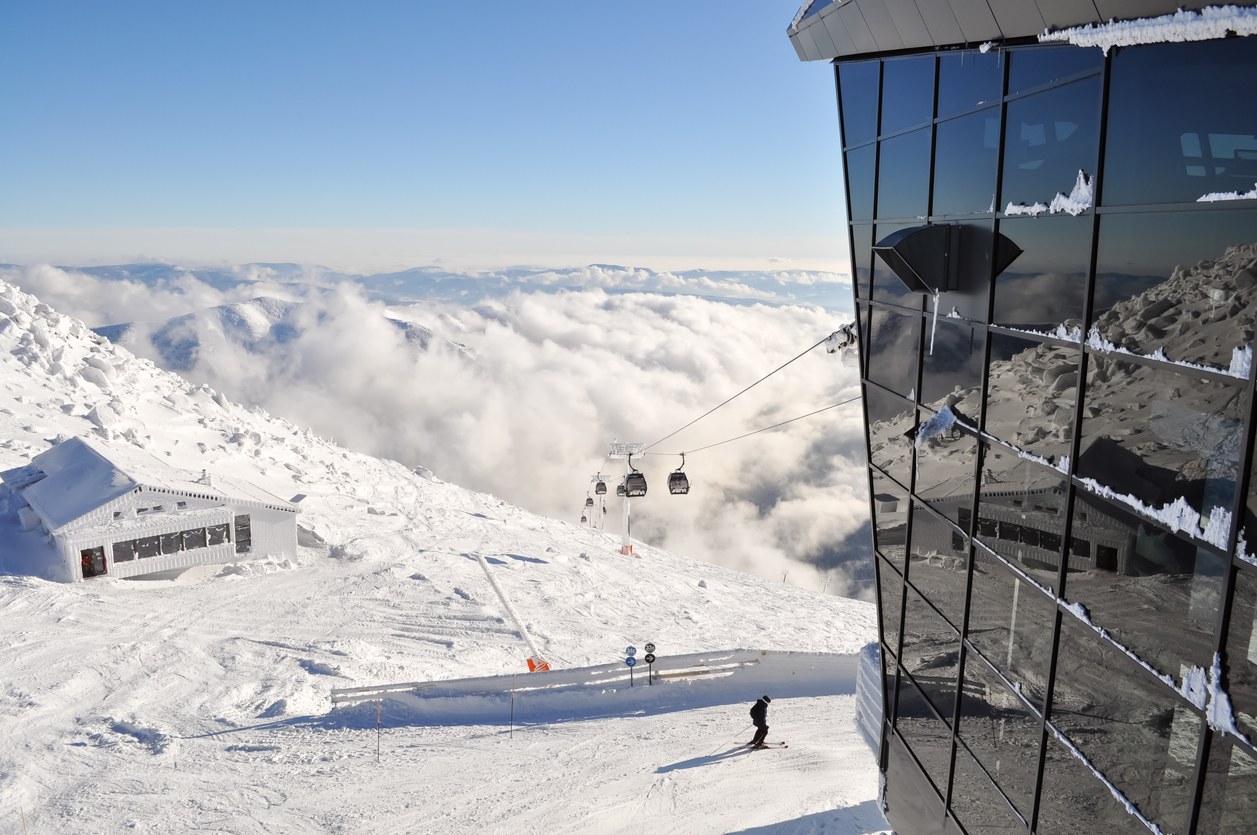 Apart from those who want to try something a little different, the main reason for choosing Eastern Europe for a skiing/snowboarding holiday continues to be value for money whilst still enjoying decent quality. Lift passes, for example, are almost a quarter of the cost of those in French or Swiss resorts, while après-ski prices are pleasingly low. You can expect to pay around £2 for (67 US cents) a local beer and £6 (7.75 USD) for lunch on the mountain. Ski tuition is friendly and of a high standard.

At many of the resorts included here, you may feel a bit like a pioneer, discovering destinations with an unsophisticated village vibe. And though the extent and the quality of the skiing fails to match the Alps, but there are notable exceptions such as Jasná in Slovakia and Russia‘s Sochi.

Don’t be put off by the relatively low altitude of these resorts. As you travel east, the snowline becomes lower – Moscow lies at 156 metres (512 feet) but has snow cover throughout the winter. As for the food, someone once told me it could be described as “mainly beige”, and I’ve found that pretty accurate in most resorts; you’ll certainly come across lots of dumplings and potatoes. But there are gastro surprises to be found along the way, too. In Bansko, Bulgaria I drank some delicious plum brandy, in Jasná I had some tasty venison with blueberry pancakes as a pudding. In Poiana Braşov, Romania they even barbecue bear.

So yes, go east! And I can tell you it’s an authentic adventure you won’t forget.

The region around capital Sarajevo was the site of the 1984 Winter Olympics, so there are definitely some good slopes here.  The largest winter resort is Jahorina, a 40-minute drive southeast of Sarajevo and home in ’84 to the women’s women’s alpine skiing events, it’s had a checkered history, for example during the Bosnian war of the early 1990s its pine forests landmined; fortunately those days are long gone. The highest of the eight lifts (including a new six-seater) rises to 1,894m (6,214 ft.), and there are 25km (nearly 16 mi.) of slopes.  Lodging-wise there’s a mix of pensions and updated older hotels, with several restaurants and watering holes to go along with them. And don’t forget to make a visit to Sarajevo’s charming 15th-century old quarter, Baščaršija.

Two hours from capital Sofia, top resort Bansko (above) is also a UNESCO World Heritage Site, dating back to the 10th century and an important 18th-century trading centre, so you can really feel the history when you walk the cobbled streets. The main thoroughfare is dotted with traditional meyhane (eating/drinking spots), which have a vibrant atmosphere and “greeters” outside wearing traditional costume. The 70km (43 mi.) of slopes rise to 2,600m (8,530 ft.), and tend to be crowded at peak times. The modern lifts include a gondola and half a dozen high-speed quads. A 16km (ten-mile) run starts from Todorka Peak, the highest point, and goes all the way down to the base station.

A bit closer to Sofia (about an hour 15 minutes) in the foothills of the Rila Mountains,   Borovets started as a 19th-century royal hunting lodge that in the 1970s was developed into a Bulgaria’s first ski resort, There are 58km (36 mi.) of runs here and the ski school has a good reputation. The après-ski is lively, and there’s night skiing until 10 pm.

My favorite Bulgarian resort of all, though, is Pamporovo because its just an hour and a half to the lovely, historic city of Plovdiv (also a 2019 European Capital of Culture); it’s also near the Greek border, which gives it a little additional exotic flair. Its 35km (22 mi.) of skiing/snowboarding is a bit more limited than the others, but the lift pass also gives you access to the slopes at the beautiful mountain town of Chepelare, with Bulgaria’s longest run and a free shuttle-bus linking the two. “The Wall” is Pamporovo’s steepest run, and hosts an international slalom course here. Non-schussing musts in the area include a trio of caves – Devil’s Throat, Haramiyska, and Uhluvitsa, with fabulous rock formations.

The best known resort here is Špindlerův Mlýn in the Krkonoše Mountains, and a great choice for mixing a bit of winter fun with a visit to magical Prague, a two-hour drive away (and a bit over three hours by bus or train). With a history reaching back to at least the 16th century and a resort town since the mid-19th, much of its architecture dates back to the Art Nouveau 1920s (when Franz Kafka was among the many Czechs who came here on holiday). The ski areas Svatý Petr (with an FIS World Cup black run and a big snow park) and Medvedín offer 28km (17 mi.) of pistes and 23 lifts, and there are also three others – Hromovka, Labská, and Horní Mísečky – all covered under one ski pass and each offering good skiing from newbie level to more experienced.  The Svatý Petr and Hromovka base stations are the best bets for après-ski, with reasonable prices and a laid-back atmosphere.

Down in the Balkans, this small, landlocked country is packed with mountainous landscape and excellent eco/adventure options. Its main winter resort is Popova Šapka (“Priest’s Hat”), an hour from capital city Skopje, with 20km (mi.) of slopes, nine lifts, and some excellent off-piste skiing (to access this terrain, there’s a snowcat company called Eskimo Freeride which will guide you in the trees, down sheer couloirs and through some wonderful powder bowls).  The resort does have a bit of an air of having seen better days, but it’s uncrowded and prices are certainly cheap.

The country’s “winter capital” is Zakopane, situated at the foot of the Tatra Mountains by the Slovak border, an hour and a half from the historic city of Cracow and five to six from Warsaw. Beautiful lakes, waterfalls, and rivers add to the landscape, and the resort has 29 lifts and 30km (nearly 19 mi.) of piste across ten small ski areas. In addition to hosting the FIS Alpine and Nordic World Ski Championships in 1939 and also the latter in 1929 and 1962, this January the ski-jumping world cup will take place here. Other activities include snowmobiling and dogsledding. The pedestrian downtown is filled with distinctive folkloric architecture traditional to the Carpathians – and these days, lots of shops and eating/drinking/partying spots (and it can get plenty crowded in winter high season).

Some 1,020m (3,379 ft.) up in the Carpathian Mountains a three-hour drive from Bucharest, Poiania Brașov is this country’s best-known resort and was the location for the movie Cold Mountain. There are 24km (15 mi.) of slopes, with ten lifts (including a pair of cable cars and a gondola) and some of Eastern Europe’s best beginner and lower intermediate skiing; the lower slopes are also floodlit until 9pm. Après-ski is lively, and there are interesting attractions in the area, such as Bran Castle (commonly associated with the notorious 15th-century ruler Vlad the Impaler, aka Dracula) is within easy excursion reach, and the city of Brașov with its medieval old town is just a few minutes away.

Much of this vast country’s skiing and snowboarding takes place near Sochi, the Black Sea city especially well known of late for hosting the 2014 Winter Olympic Games, and for me the pick of the handful of resorts down here is Rosa Khutor. Its attractive riverside village was purpose built for the Olympics, and uphill there are 77km (48 mi.) of slopes and 26 modern lifts (including 10 gondolas) going up to a height of 2,320m (7,612 ft.) – its steep terrain making for some of the most exciting downhill action in Eastern Europe, and up there with the top European and North American resorts. Sochi is a little over an hour’s drive away, and it’s also possible to combine a visit with a short break in Istanbul (a six-hour flight), which I did. One of the downsides I found was the prices – this area is expensive next to the rest of Eastern Europe. Another is that while snow cover was good during my visit, it can be patchy. Après-ski, Rosa and the Sochi area in general serve up lots of great options and entertainment – even slope-side concerts.

This country’s largest centre of winter tourism since 1964, a four-hour drive from Belgrade (many of whose sportier residents flock here on winter weekends) is Kopaonik in the mountain range of the same name, with a base elevation of 1,770 m (5,810 ft) rising to 2,017m (6,617 ft). Today the 55km (34 mi.) of runs for all levels (though nothing particularly steep) are served by 24 modern lifts. There’s a snow park for extreme skiers and snowboarders, as well as an annual “Big Snow” music festival the last week of March. And as for après-ski, well let’s just say the nightlife can be Slavically “boisterous”.

Perhaps my favourite East European winter playground is up in the central north of this highly underrated country, a three-to-four-hour drive from capital Bratislava. Jasná (above and top) on Mount Chopok in the Low Tatras range, because it has some of the best piste skiing, with 44.5km (28 mi.) of slopes rising to a top height of 2,005m (6,578 ft.), along with 22 lifts that are some of the most cutting-edge in this part of Europe. Jasná hosted the Freeride World Tour in 2017 and its marked freeride zones open up some easy-to-reach off-piste skiing. Besides good après-ski right here, the nearby Liptovský Mikuláš offers even more – bars, eateries, clubs, and a giant water park and spa (with plenty of indoor rides/attractions) called Tatralandia – along with a medieval old town, galleries, a museum, and other draws.

Another small Balkan country, much of Slovenia is very Alpine – as in, part of the southeastern Alps – and boasts four main resorts. About an hour from capital Ljubljana, Bohinj is not one village but several – all of them on a beautiful lake of the same name.  The local Vogel ski area has nine lifts (including one cable-car); slopes mainly suited to beginners and intermediates; and fairly limited après-ski – a pair of two bars; a nightclub; a café offering homely fare; and a mountain inn serving traditional dishes.

About the same distance from the capital, Kranjska Gora is set in a valley between wooded mountains close to the Italian and Austrian borders. Its Tyrolean charm and chalet-style accommodations make it an especially good fit for families. Among the facilities are 19 lifts and 30km (19 mi.) of skiing, 40km (25 mi.) of cross-country, and floodlit night-skiing. Après-ski includes a range of bars and a casino.

A little farther afield (an hour 20 minutes), Mariborski Pohorje is Slovenia’s largest snow spot, just a few minutes from its second largest city Maribor, home to a lovely medieval old town. There are 20 lifts, and the 42km (26 mi.) of slopes are mainly suited to beginners and lower intermediates; there’s 7km (a little over 4 mi.) of night-skiing, as well.

Finally, closest of all to the capital – just 15 minutes from the airport – Krvavec lies at an altitude of 1,853m (6,079 ft.) and is known as the country’s sunniest winter resort as well as its second largest, with 30km (19 mi.) of wide pistes. There are 11 lifts here, including a six-seater, facilities are well maintained, and accommodation is right on the slopes. Nightlife includes some unique ice bars, and on Fridays and Saturdays you can go night sledding on a partially illuminated track.

Felice Hardy is co-editor of the ski information website www.welove2ski.com.