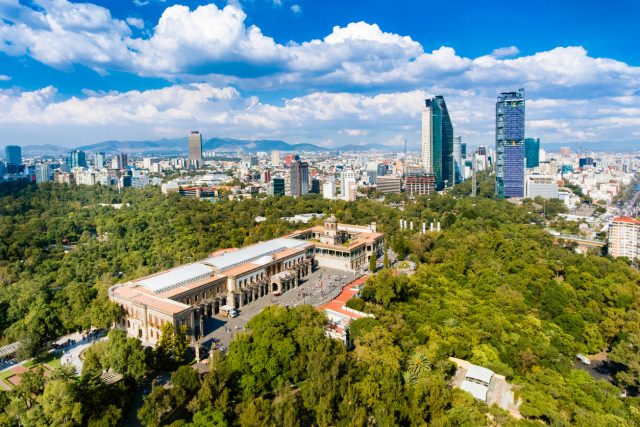 Iberia flies to many of the world’s great cities – historic, exciting, and quite often harbouring fascinating surprises. If you scratch beneath their surfaces, you’ll discover interesting stories and places that add other rich dimensions to these destinations beyond the usual tourist attractions. So I’ve decided today to take a look at some Iberia gateways  (with a second installation on the way) to dig up some of the cool, lesser known tidbits that can expand visitors’ appreciation of these scintillating cities. Check it out:

There are certainly a number of castles in the Americas,  but the only one that’s ever been used by “royalty” is in Mexico‘s capital (top): the  Chapultepec Castle, centrepiece of the sprawling eponymous park. It was the residence of  Emperor Maximilian I, an Austrian archduke and military leader offered the post by Napoleon III in the aftermath of the French invasion of Mexico after its president Benito Juárez suspended loan payments to creditors in France, Spain, and Great Britain. Max and Empress Carlota ruled here from 1864 till he was overthrown and executed by Mexican forces restoring Juárez, and subsequently it was also used as a military academy, astronomical observatory, and presidential palace before becoming the National Museum of History in 1944. It has 19 opulent rooms displaying more than 90,000 items illustrating the country’s history from colonial time onward, including coins, medieval armor, historical documents, paintings, and furnishings. And the views from its terraces are grand and sweeping, with the city’s main boulevard, Avenida Reforma, front and centre.

Built in 1885, these days the Japanese capital’s Shinjuku metro station is the Guinness Book of World Records winner as the busiest in the entire world, with a whopping 3.5 million commuters passing through here every day. The station has 36 train platforms and and more than 200 entrances/exits, and it’s still growing, with 32 floors added four years ago.  It’s a worthwhile destination not just in its own right but also to explore the cosmopolitan, modern, even futuristic district of the same name surrounding it, a 24/7 hive of activity with fashionable locals, gleaming neon lights, and impressive structures like the Metropolitan Government Building and restaurants as well as watering holes such as the New York Bar at the Park Hyatt Tokyo, one of the locations for Lost in Translation, the 2006 Sofia Coppola movie with Scarlett Johansson and Bill Murray. 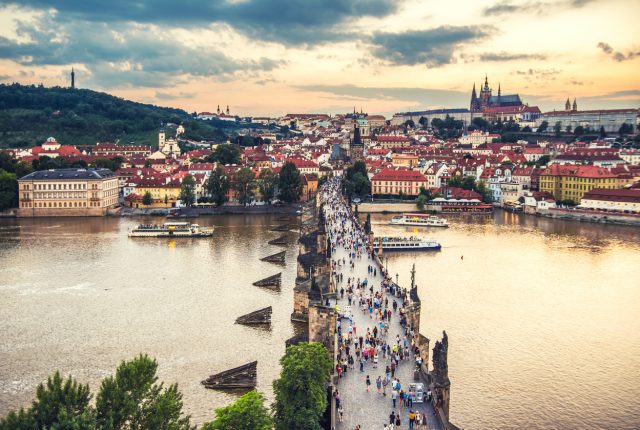 Whatever would this city‘s lovely Staré Město (Old Town) be without its Gothic Charles Bridge? Construction of the Karlův Most commenced 662 years ago, but on a very specific chosen date and time: 5:31 am on 9 July 1357. King Charles IV, who laid the first stone and has his name plastered many other places around here besides this bridge, was big-time into astrology and numerology, so chose this date because in numerology, palindromic numbers (which read identically both forwards and backwards) have special significance in terms of special and momentous events and life changes. And, you see, this date can be written as exactly that: 1-3-5-7-9-7-5-3-1 (1357 on the 9th day of the seventh month at 5:31). There’s plenty of other lore associated with the bridge, too, including a water goblin who supposedly lives under it; the singing ghosts of ten executed aristocrats who had their heads placed on spikes along its length; and as the site of the drowning of 14th-century St. John Nepomuk, the queen’s confessor, by her hubby (and Charle’s IV’s son) King Wenceslaus because he wouldn’t spill her confessions.

Andalusia‘s biggest city (and third largest in Spain) is packed with amazing historical monuments and sites, but one that’s sometimes overlooked by visitors is the 16th-century  General Archive of the Indies, a treasury of original artifacts and documents relating to Spain’s exploration and colonisation of the Americas (Seville was the primary port and trade hub for the country’s transatlantic trade). Designed by Juan de Herrera, architect of the famous El Escorial Monastery near Madrid and usually hosting interesting temporary exhibitions, the Archivo de Indias‘ 43,000-some documents number around 80 million pages and include 8,000 maps – enough to fill nine kilometres’ (more than 5½ miles’) worth of shelves. Together with the nearby cathedral and the Real Alcázar palace, it’s part of Seville’s UNESCO World Heritage Site for good reason, and free guided tours are offered.

Germany is hardly a country you’d think of when it comes to surfing – and Bavaria‘s landlocked capital pretty much not at all. Yet its lovely Englischer Garten park offers lots more than idyllic meadows, woods, and a big ol’ Chinese-style pagoda; it also happens to be home to one of the world’s quirkiest spots to hang ten: created by landscapers at the end of the 19th century, the Eisbach River which runs through it has a section so wild it’s been popular with local surfers since the 1970s, who once the weather warms up even a little start lining up for a go. Hey, it’s not the Oahu Pipeline, but it keeps the hometown crowd happy, and even if you don’t ride a board yourself, it makes a pretty entertaining sight to behold. 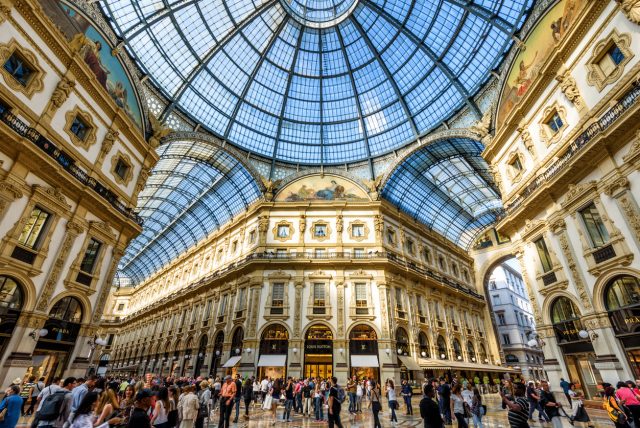 If you known anything about Italy’s business and fashion capital, you’ve heard of or maybe even strolled through the Galleria Vittorio Emanuele,  the grand, elegant shopping-and-dining arcade crowned with an octagonal glass-and-iron roof. Inaugurated in 1847 right alongside the Duomo cathedral, this is now Milan’s most visited spot, with luxury shops and restaurants including several of the city’s oldest still in operation. But even you might not know that apart from offering a lovely stroll, window shopping, and refreshments, the Galleria also has a rooftop terrace from which you can get a 360-degree  panoramic eyeful – day or night – out over not just the Duomo but much of the city centre, including La Scala opera, and out toward the modern skyline of Porta Nuova, as well as grab a drink or bite whilst taking it all in.

Like large cities in most Catholic countries, Peru‘s capital boasts scores of churches large and small. And, er, really small, as in one that’s the tiniest in the world. Thought to have been founded in 1555, Nuestra Señora del Rosario (Our Lady of the Rosary), aka the Capilla del Puente (Bridge Chapel) isn’t much to look at from outside with its drab brown façade, though inside you’ll find besides an image of the Virgin of the Rosary a nice neoclassical altarpiece surrounding it. But what’s truly most remarkable about it is its dimensions – just ten metres high, five wide, and 12 deep (33 by 16 by 39 feet), covering just 50 square metres (538 sq. ft). You’ll find this little oddity on Calle Jirón Trujillo in the Rimac district north of downtown Lima.

This is actually more of a coming attraction than a current one, but well worth mentioning. By now you may have heard of Manhattan‘s High Line, the elevated train tracks the  Lower West Side converted into a lovely urban park. Now across town on the Lower East Side comes the Lowline, which in 2021 will open as the world’s first underground park in the onetime Williamsburg Bridge trolley terminal stretching three city blocks just below Delancey Street, abandoned since 1948. With 6m (20-ft.) ceilings, the cavernous .4-hectare (one-acre) space will have an organic, futuristic look, be illuminated by natural sunlight brough down through fibre optics and helio tubes, and of course be filled with various trees and shrubs. When it finally does open, Lowline promises to be a magical space that will redefine the term “lowlife”.

The capital of Spain of course offers a lot of things to see and do, both culturally and otherwise. But by far the oldest, and one of the quirkiest, is the Temple of Debod, just north of the Plaza de España. Gifted by Egypt in gratitude to Spain for its help in saving the ancient treasures of the lower Nile Valley from being drowned by the lake created by the new Aswan High Dam, it was rebuilt here in 1972 and today also has some nifty multimedia displays inside. Another historic relic you might not know about is a set of three sections of the Berlin Wall are preserved in a fountain in the Chamartín district’s Parque Berlín, near Santiago Bernabeu football stadium. The park was inaugurated in 1967 by that city’s then mayor – and later German chancellor – Willy Brandt, and the slabs added in 1990 (and shortly afterward, their historic grafitti nearly erased by city workers conducting a neighbourhood cleanup!).

The name of the Pont Neuf over the River Seine via the Île de la Cité may translate as “new bridge”, but in fact it’s the oldest of all in the City of Light, built in 1607.  The “new” part, you see, comes from the fact that is was the first bridge of stone rather than wood. It’s adorned across its 232m (761-ft.) length and 20m (66-ft.) width with elegant lampposts, an equestrian statue of King Henry IV, and 381 mascarons , stone masks of satyrs and divinites of forest and field, are the stone masks, 381 in number, each being different and which decorate the sides of the bridge.

Want more still? Here’s another 10 spots in another 10 Iberia destinations!