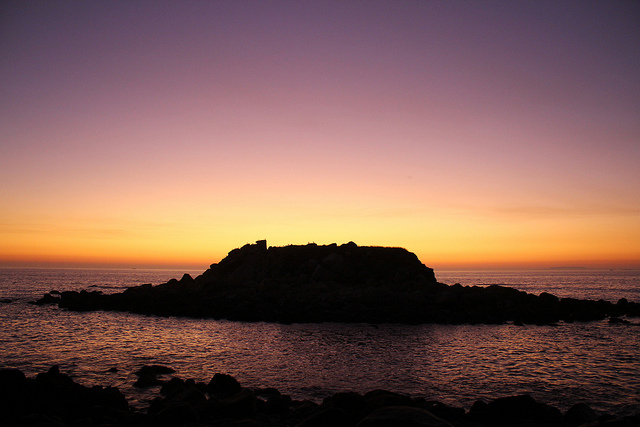 Few among us us don’t love the sea, sand, and sun of a delicious warm-weather strand. But fall, spring, and even winter bring the possibility of another kind of beach appreciation even without swimsuits and sunscreen. For this purpose, some of Spain’s best can be found up in its green north – going from west to east, in the communities of Galicia, Asturias, Cantabria, and the Basque Country. So I thought I’d offer up a sampling of one from each – all gorgeously set and with other interesting things to see and do nearby – to demonstrate that the beach doesn’t have to be only for summer – so vamos a la playa, any time of year! 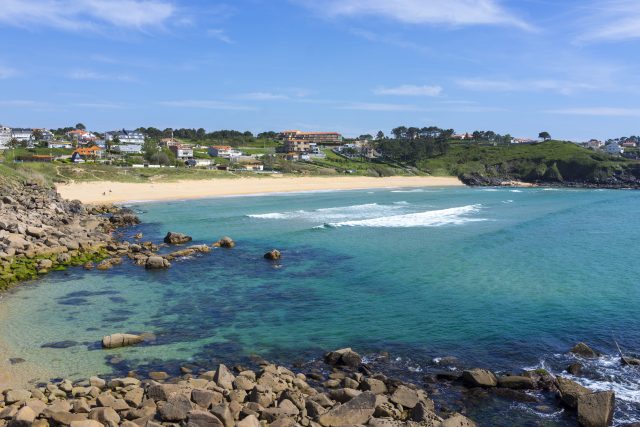 Out on the fjords of the Rias Baixas a half hour west of Pontevedra, A Lanzada a 2,400-metre (7,874-foot) stretch of fine, white sand lies in a microclimate that’s usually several degrees warmer than the surrounding region. Besides strolling the beach and looking out into the vast expanse of the Atlantic Ocean (spotting the island of Ons in the distance, also a popular warm-weather beach destination of its own), there are cool spots to explore nearby, such as the ruins of an 8th-century fortress and its still standing Romanesque church; the remains of the 3rd-century Roman Adro Vello necropolis, villa, and temple (converted by the Visigoths into a church); chic resort town of Sanxenxo; and charming fishing village O Grove, known for its aquarium, its mid-October Festa do  Marisco (seafood festival) and the hot-springs spas of its A Toxa island.

East of Galicia, the Asturian coast of the Bay of Biscay is lined with lovely port towns, and one of them, Llanes, sits on what many consider one of Spain’s most spectacular beaches, called Cuevas del Mar (Sea Caves). Located at the mouth of the Cuevas River, it is, as the name implies, this petite cove is surrounded by rocky outcroppings riddled with rugged, wave-carved caves and grottoes – a dramatic sight, to be sure! And from the end of the beach you can take a pretty little path which will lead you past goats, horses, and lovely ocean views to the Ermita de San Antonio, a pretty little 19th-century chapel surrounded by pine trees. The town of Llanes itself is well worth a ramble as well, with its picturesque medieval old quarter, its grand, 19th-century indianos mansions, and its delicious seafood eateries. Plus a 40-minute drive west takes you to another lovely seaside town, Ribadesella, with a similar vibe, and nearby also the Tito Bustillo Cave, one of Spain’s fascinating caves (the most famous being Altamira in Cantabria) known for their prehistoric art. 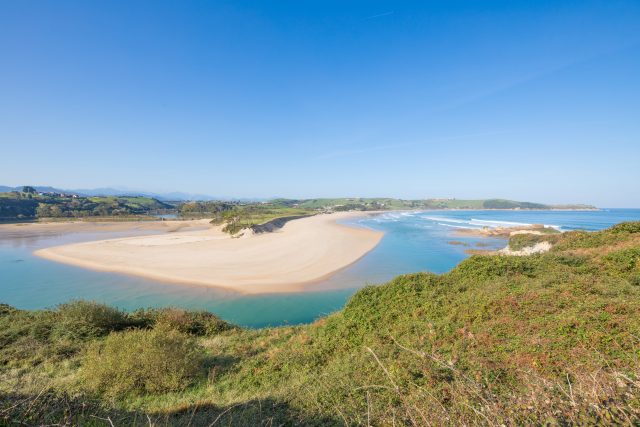 The green mountain-and-sea province and autonomous community east of Asturias is also lined with gorgeous beaches, and it was hard to choose just one for this post. But finally I settled on Playa de Oyambre, about an hour and a half west of Cantabrian capital Santander. One of a number of beaches known for one of Spain’s best surfing scenes and dramatically set at the base of cliffs up to 50 metres (164 ft.) high, with the inland Picos de Europa mountains towering in the distance, it’s appealing not just for its kicky waves but its two kilometres (1¼ mile) of white sand, including some of the prettiest dunes in northern Spain. The beach is the coastal jewel of the surrounding Oyambre Nature Reserve, with fantastic hiking trails, and lies between the towns of Comillas and San Vicente de la Barquera. The former boasts some impressive architecture, especially Art Deco (called Modernista in Spain), thanks to its popularity beginning in the late 19th century as a summer holiday mecca for aristocrats; the star here is El Capricho, a villa that’s an Orientalist fantasy by none other than the great Antoni Gaudí.  San Vicente, meanwhile, is a lively fishing port with great seafood restaurants and several landmarks such as the Castillo del Rey, one of Spain’s great sea castles, and an impressive, 28-arch  bridge dating to the 16th century, the Puente de la Maza. 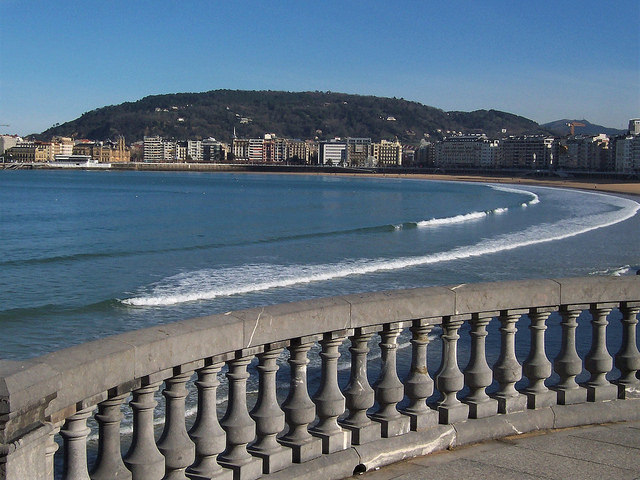 The next green region, east of Cantabria, also boasts its share of beautiful beaches, such as Mundaka and Zarautz (also among the best Spanish surfing spots), but here I’m going to have go with one of Spain’s loveliest urban beaches, the Playa de la Concha, extending 1.5 km (just under a mile) along La Concha Bay. The centrepiece and symbol of San Sebastián (aka Donostia) regularly makes and even tops lists of Europe’s best beaches because of its fine sand, medium surf (you’ll see surfers out here, too), and most especially its elegance, embellished by a majestic, six-km (3¾-mi.) promenade, the Paseo de la Concha, backed by the gracious 19th-century architecture for which the city is famous. Rip-roaring in summer, it is, some might argue, even more charming and romantic in the off season.

For more Spanish beaches to enjoy in the off season, click here.