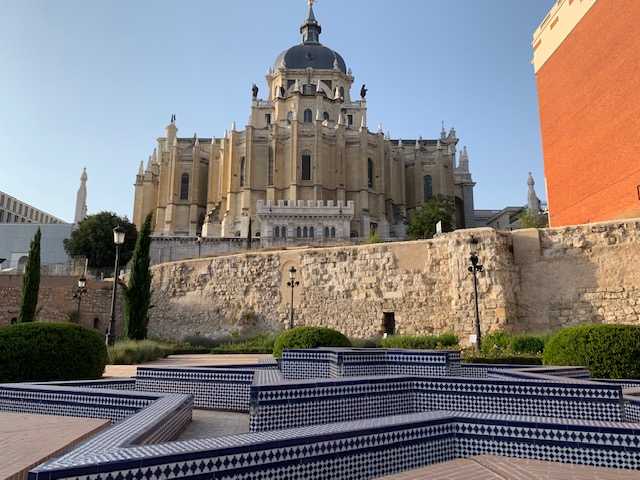 I’ve always had a fascinating for things mediaeval. Would never want to have actually lived back in the Middle Ages, mind you. But the architecture and atmosphere of the Romanesque and the Gothic have always captivated me. And while my adopted country provides more than enough to delight me on this front year after year, I’ve been enjoying my home town Madrid more for its marvelous architecture and monuments dating from the mid-16th century onward, when King Phillip II chose it as the capital of united Spain. Even the city’s history museum takes as its starting point the 1560’s. But I recently discovered that there are also several remarkable remnants of the medieval – meaning pre-16th-century – tucked away amidst the Baroque, the Renaissance, the Neoclassical, and the modern of the Spanish capital.

After being introduced this past summer to Jaime Sánchez, a gato (meaning a madrileño – aka Madrid resident – of at least three generations’ standing), a travel blogger and tour guide with a doctorate in art history from Madrid Complutense University, I discovered we have in common a fascination with things medieval – and furthermore, that our city is not as bereft of them as I’d believed. Madrid does have clear medieval roots – and actually, they reach back even further, as the area had been inhabited since prehistoric times. But the roots of the city per se can be traced to a settlement called Matrice, established in the 2nd century BCE during the Roman Empire‘s colonisation of Iberia. When the area was conquered in the 8th century by Muslim invaders from North Africa and became part of Islamic Al Andalus, they christened it Mayrit and built a castle and citadel called Al Mudanya (artist’s conception below) as well as a mosque alongside – around all of which a town grew up. 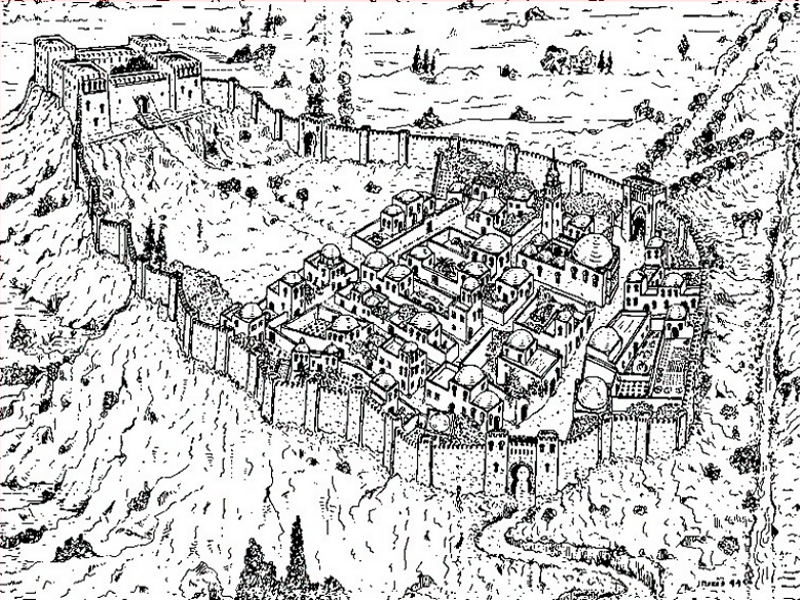 Then in 1085 along came Alfonso VI, ruler of the Kingdom of Castile and León, and the town grew further, with Christians, Muslims, and Jews living side by side. That was nothing, however, compared to its growth after the royal court relocated here in 1561. Most of Madrid’s medieval past was wiped away in redeveloping and expanding the new capital, but I was fascinated to be taken by Jaime on a tour a few weeks ago of what little remains, and its legacy.

On a hot summer afternoon, I met him in front of the sprawling, grandiose royal Palacio de Oriente (one of the city’s must-see sights, of course), where he explained that it was built over that original Moorish castle, of which nothing remains. Things got more interesting when we walked next door to Almudena Cathedral (top; “Almudena” deriving from the name of the original site, Al Mudayna), built on the site of Moorish Mayrit’s mosque, which was destroyed during the 11th-century Christian Reconquest – but only a whopping 800 years later, due to all the considerable expenses the Spanish Empire incurred in colonising the Americas and fighting wars in Europe  during that time; the cathedral broke ground in 1883 and wasn’t completely finished and consecrated till 1993.

Largely sobre Neoclassical on the outside and Gothic-Revival within, its centrepiece is a huge altarpiece of gilt and more than two dozen oil paintings organised around the wooden polychrome statue of Santa María Real de la Almudena, co-patron saint of Madrid, estimated to date to around 1500; the faithful climb steps up to the altarpiece to pay their respects, and every 9 November the statue is paraded through the nearby streets and special a special mass, floral offerings, and other religious ceremonies take place. 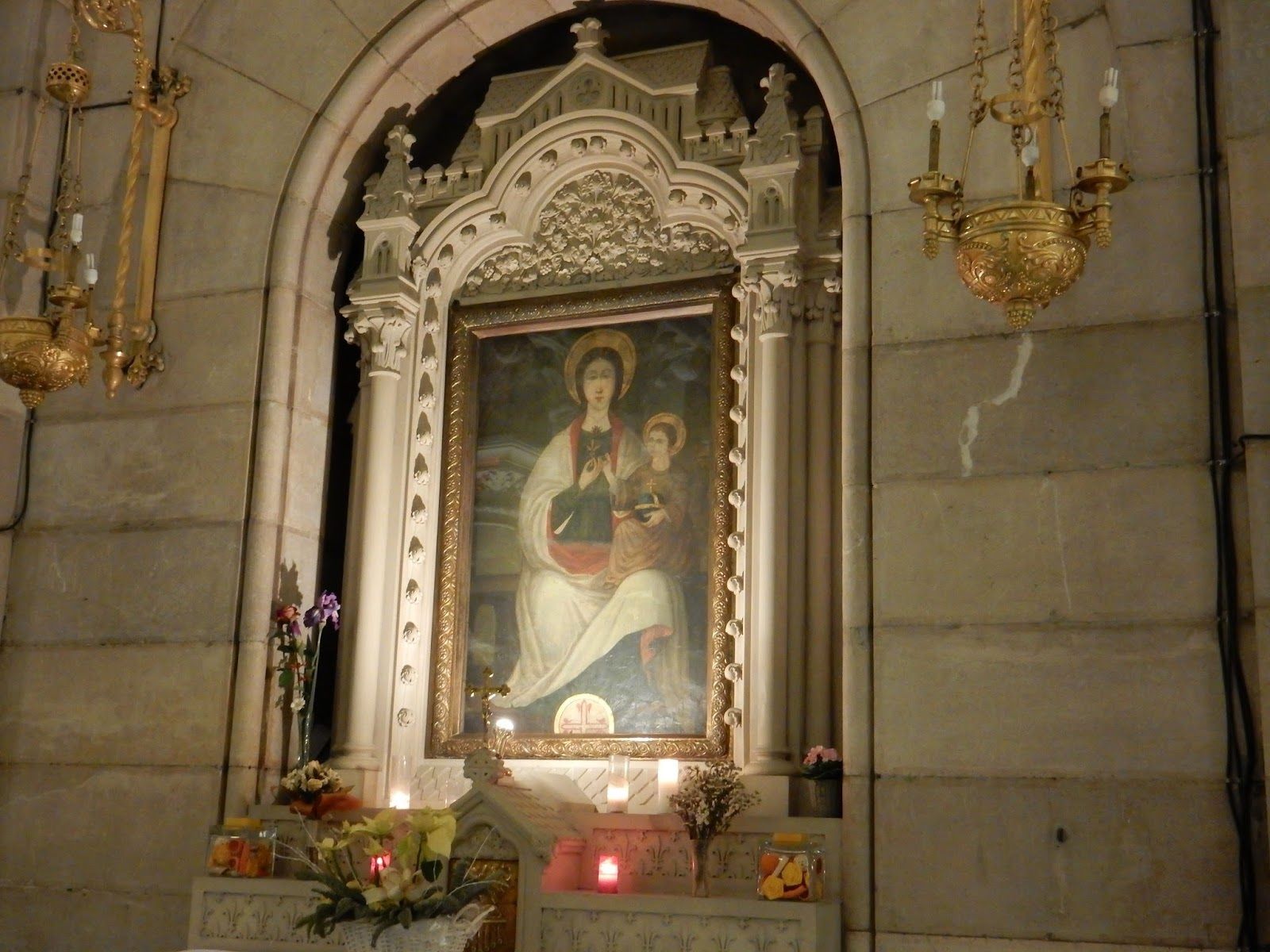 Even more impressive was the next stop on our tour, around the corner and halfway down the block to La Almudena’s crypt (above, and at top between the cathedral and the Muslim wall), a Neo-Romanesque affair distinguished by a forest of 400 thick columns, many carved from a monolithic piece of stone. They’re flanked by 20 chapels paid for by various aristocratic or simply wealthy families; the most notable displays a painting of Virgen de la Flor de Lis (Madonna of the Lily, above) believed to have been commissioned in 1083, while another, of the Marquis de Urquino, is executed in splendid medieval style. As you walk around, you’ll tread upon a number of tombs of the wealthy and powerful of ages past, including a 19th-century royal princess and most recently Carmen Franco Polo, daughter of Francisco Franco Spain’s dictator from 1939 to 1975 (she died rather  recently, in 2017). The crypt was especially dark and spooky before it was restored and cleaned in 2000, but even today it exerts a powerful, austere charisma – especially if you experience it, as we did, to the accompaniment of crashing organ chords. 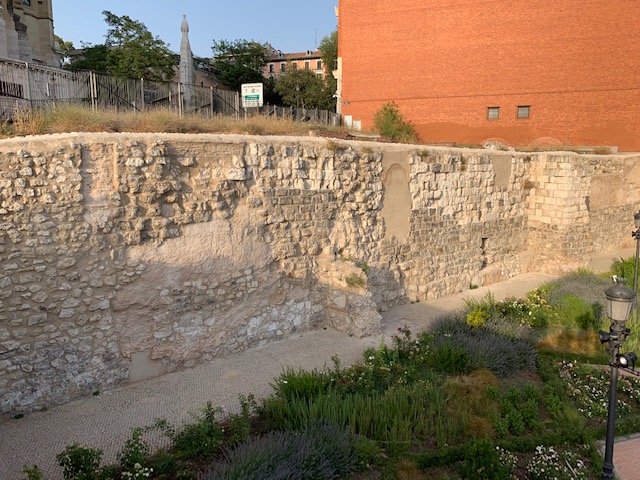 Right across from the crypt is what I consider in some ways the highlight of the tour. With an Islamic star fountain at its centre, the small, sunken Emir Mohamed I Park (above and top) is built around what’s left of Mayrit’s original, 9th-century town walls – the 150-metre-long (492-foot) section of which I saw here is four to six metres (13-20 feet) high, about half of its original height – which originally enclosed a modest area of around four hectares (ten acres). Even now, gazing upon them leads the imagination to muse what it must have been like here more than 1,100 years ago. 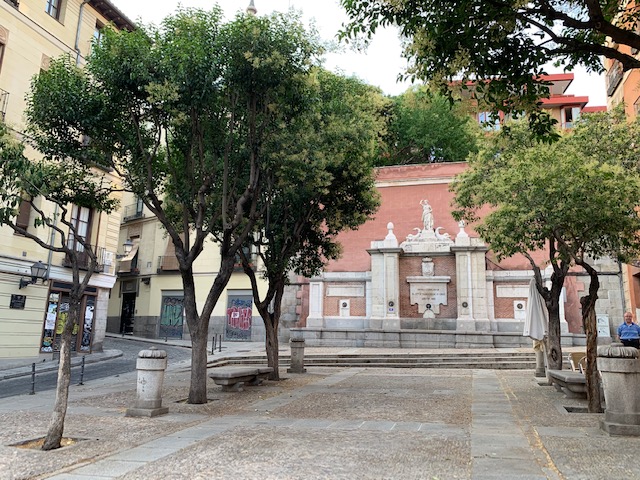 From here, Jaime led me past an undistinguished block of flats, built in 1972 atop another section of Moorish wall before a law was passed to prevent this sort of thing – though a smidgeon of it is still visible through the car park under the building – then under the Art Deco Segovia Viaduct into the neighborhood of La Latina, a lively district popular for eating and drinking but also harbouring tranquil little corners. It’s also Madrid’s oldest remaining neighbourhood, as well as part of Spain’s Jewish heritage, since in the Middle Ages it was the Judería (Jewish ghetto) until the Jews were expelled or forcibly converted to Christianity in 1492 by order of Queen Isabella and King Ferdinand. Around the 11th century especially, this warren of narrow cobblestone lanes was considered Madrid’s wealthiest district, although its residents’ movements were restricted as was common in much of Europe at the time. 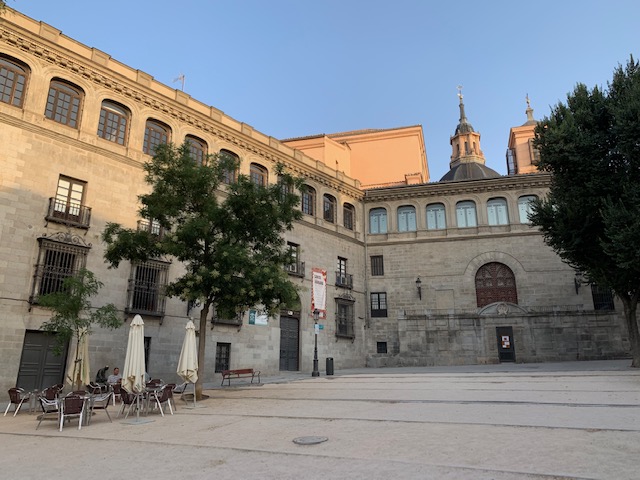 One small square, the Plaza de la Cruz Verde (above) later became known for its burnings of “heretics” at the hands of the Inquisition, but in medieval times was part of the Judería, featuring a large green cross of palm fronds (cruz verde), which Jaime explained was there to remind the Jews that this was a Christian city. Another nearby, the Plaza de la Paja (Straw Square), dominated by the late-15th-century Palacio de las Vargas (immediately above, now a high school) is an atmospheric spot to linger over coffee, drinks, and/or tapas at one of its cafés. (Incidentally, at the square’s northern end we also had the pleasure of ducking into a small gem: the Jardín del Príncipe Anglona, a small, “secret” garden with brick pathways, bowers, low boxwood hedges, and little water channels representing the four rivers of Paradise. To me it feels medieval, but it’s actually not, having been created in the mid-18th century; nonetheless, the garden is totally charming nonetheless, and if you come in the spring, you’ll be rewarded by lovely roses in full bloom.) 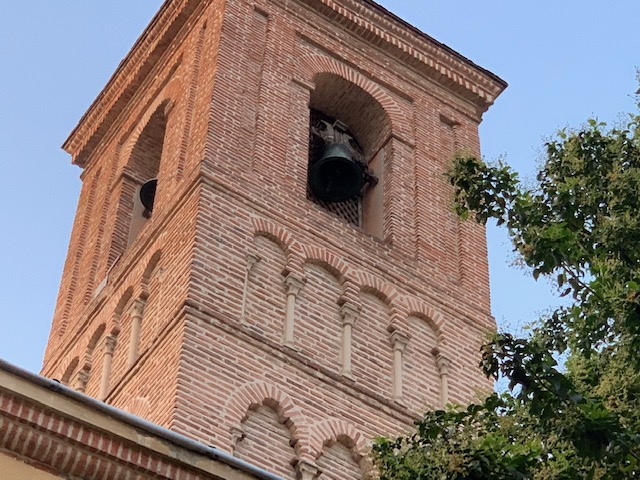 Nearby, we also swung by the Romanesque brick Church of San Nicolás de los Servitas (above), the oldest in Madrid, built in the 12th century on the site of a former mosque. Much of it was rebuilt in the 15th through 18th centuries, but today inside we can still see the 15th-century apse, Gothic ceiling vault, and Mudéjar (Moorish-inspired medieval) plasterwork and other details as well as outside the original bell tower, adorned with Moorish-style brick horseshoe arches – though its slate spire was added in the 18th century. Inside there’s also an exhibit about the early history of Muslim Mayrit.

And the end of our three-hour stroll, I was absolutely enthralled, and thrilled to have learned so much about the very early days of this great metropolis. Look Jaime up the next time you’re in town, and you’ll see what I mean!