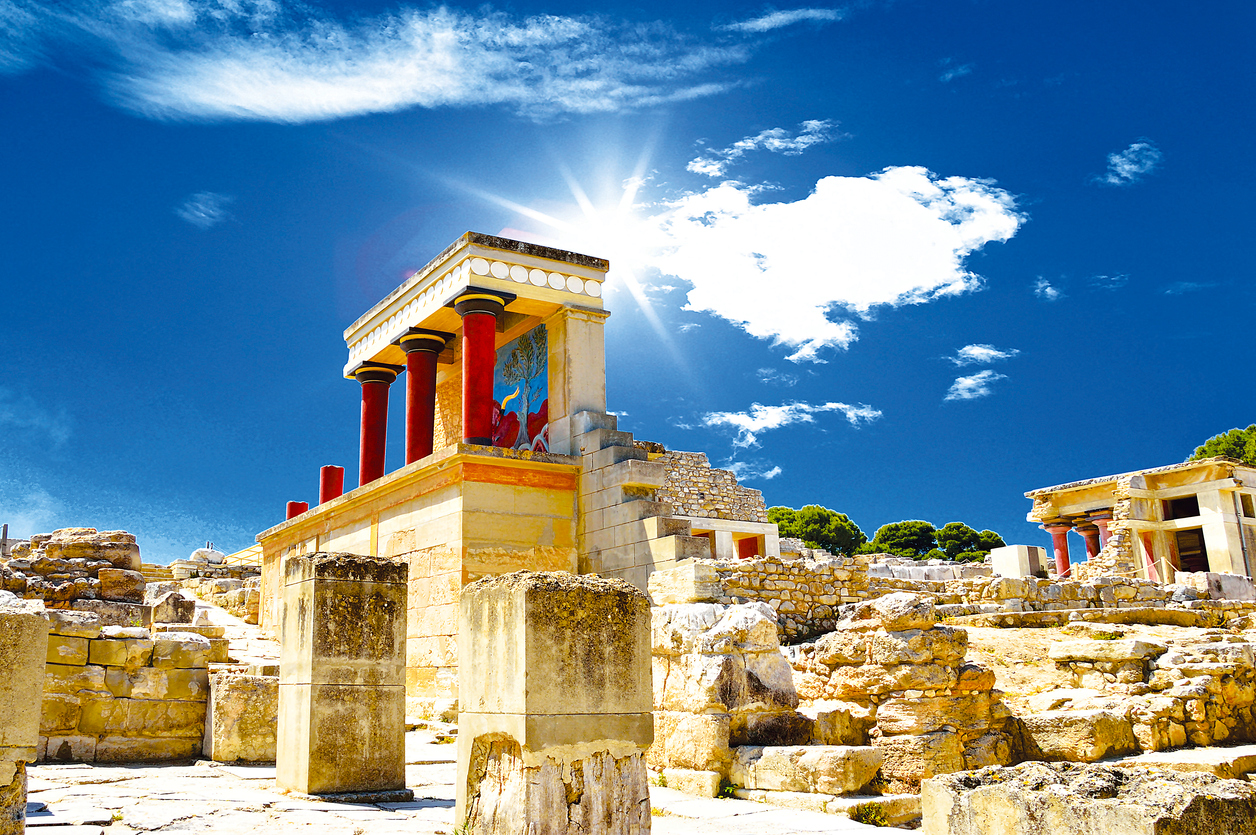 Greece is of course reknowned for its thousands of sun-drenched Mediterranean islands and this blog has covered them aplenty (such as here, here, here, and here). But today I’d like to talk about the largest (and, with a population of over 623,000, most populous) of the Greek islands, on the occasion of its recently launched, twice weekly direct service to Crete (HER), a three-hour-and-forty-minute flight from Madrid (flying time between HER and Athens, if you’re including that in your trip, is just under an hour). While each island is appealing in its own way, few have the depth and diversity of Κρήτη, from scores of ancient ruins to hundreds of spectacular beaches and landscapes – along with  its own delightfully fresh and rustic variant of Greek cuisine.

Though human habitation here stretches far back into paleolithic times tens of thousands of years ago, Crete’s special claim to fame is that it was the cradle of Europe’s first known advanced civilisation, the pre-Hellenic Minoan, which flourished from around 2700 to 1450 BCE and largely through trading spread its cultural influence throughout the Mediterranean and as far south as Egypt and east to Anatolia (present day Turkey). They’re thought to have died out because of invasion by the Mycenaeans of mainland Greece), complicated by the hardships wrought by the legendary and catastrophic eruption of the volcano of Thera (present-day Santorini), 199 kilometres (124 miles) north. The Minoans’ legacy includes impressive artwork and buildings, some quite elaborate, even palatial. 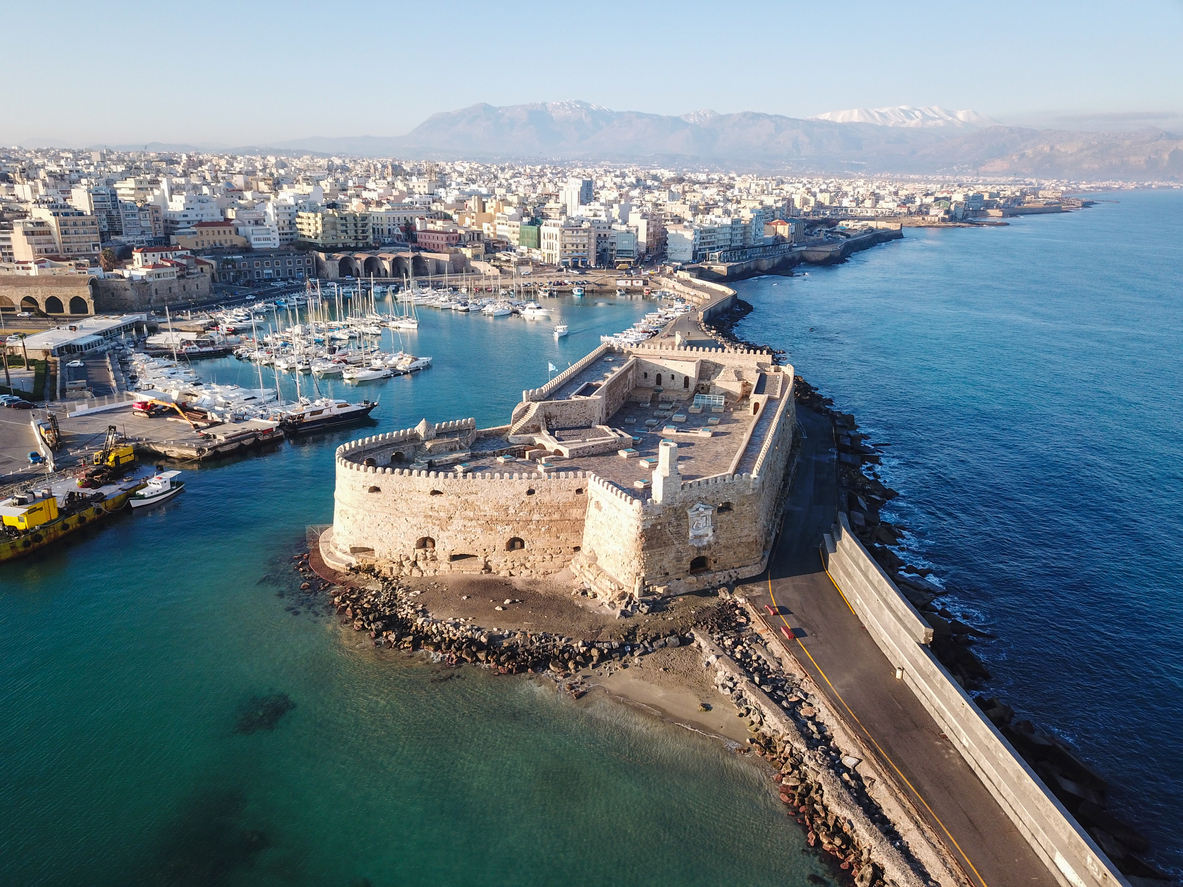 And it’s the main concentration of ruins of the Minoan civilisation that serves as the top allure for many visitors of Crete’s vibrant if not particularly comely capital Heraklion (above; Iraklio in Greek), Greece’s fifth largest city (pop. about 174,000, metro area 226,000) and in recent years one of Europe’s fastest growing tourism destinations. A five-minute taxi ride or 15 minutes by bus will get you to Knossos (top), a sprawling site centred around a large palace, and a mix of ruins and (unlike most archaeological sites) sometimes colourfully painted reconstructions. Those reconstructions were controversial in their day, but they certainly do bring the past to vivid life with their boldly hued columns and frescoes (most of the originals of which, by the way, are in the superb, cutting-edge Heraklion Archaeological Museum, also an absolute must).

Other Minoan sites that should be high on your list – also both with grand palaces as their focus – include the island’s second most important, Phaistos, located about an hour-and-15-minute drive south from Heraklion near the southern coast; and Malia, on the north coast a half hour west of the capital. Not far from the former, by the way, it’s also worth stopping for a look at Gortyna, which avoided the collapse that befell many other Cretan towns and in the first several centuries CE became a stronghold of the Roman Empire whose interesting ruins can be visited today. (In the same area you might also consider a stop at the little Museum of Cretan Ethnology in the fetching traditional village of Vori, documenting the Cretan people and their lifestyles over the centuries. 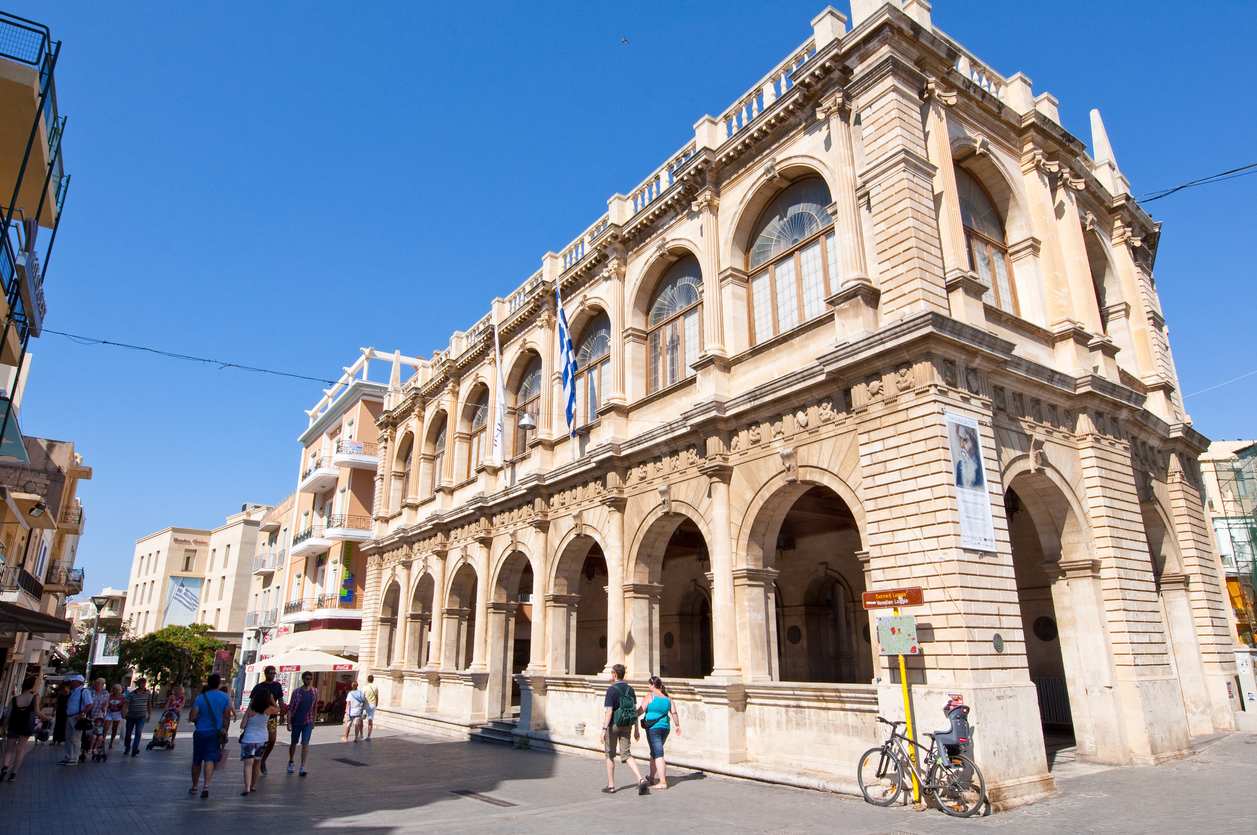 Back in Heraklion, besides Knossos there’s plenty of interest in the rest of the city, as well. It was actually founded in 824 by a pirate who’d been expelled from Muslim al-Andalus in Iberia and conquered Crete; fell in 961 to the Byzantine Empire; passed to the Venetian Republic which purchased the island in 1204; and finally ruled by the Ottoman Turks from 1669 to 1898, when Crete became an autonomous state and 15 years later part of the Kingdom of Greece. And quite a few vestiges of this variegated history remain, perhaps the most notable example being the Venetian fortifications, including doughty defensive walls and low-slung Koules Fortress, completed at the harbour entrance in 1540 and open to visitors today; also check out the lovely Venetian Loggia (above), a group of 17th-century buildings on the city’s main drag, 25 Avgoustou, that served back then as Crete’s administrative and social hub. Then of course the Byzantine heritage is reflected in a number of landmarks throughout the city, especially Greek Orthodox churches such as Agia Ekaterini of Sinai, Agios Markos, Agios Minas, Agios Titos, many of them featuring Byzantine icons of the unique, Renaissance-Venetian-influenced Cretan School.

Don’t forget, as well, to take full advantage of Heraklion’s fine museums besides the aforementioned archaeology museum; also worth a visit are the Historical Museum of Crete (including paintings by some local bloke named Domenikos Theokotopolous, who in the 16th century made his way to Spain and became El Greco), the Museum of Natural History, and the Museum of Visual Arts (this last an interesting window into the local contemporary arts scene). And if you’re willing to venture a few kilometres out of town, there’s an interesting open-air Cretan folklore museum out in Hersonissos (these days mostly a modern resort/beach town) called Lychnostatis.

Beyond culture, fun parts of the city to stroll, eat, drink, and party in a variety of venues from tavernas to clubs include Korai Street, the waterfront, Agios Titos Square, and Eleftheriou Venizelou (aka Lions) Square. 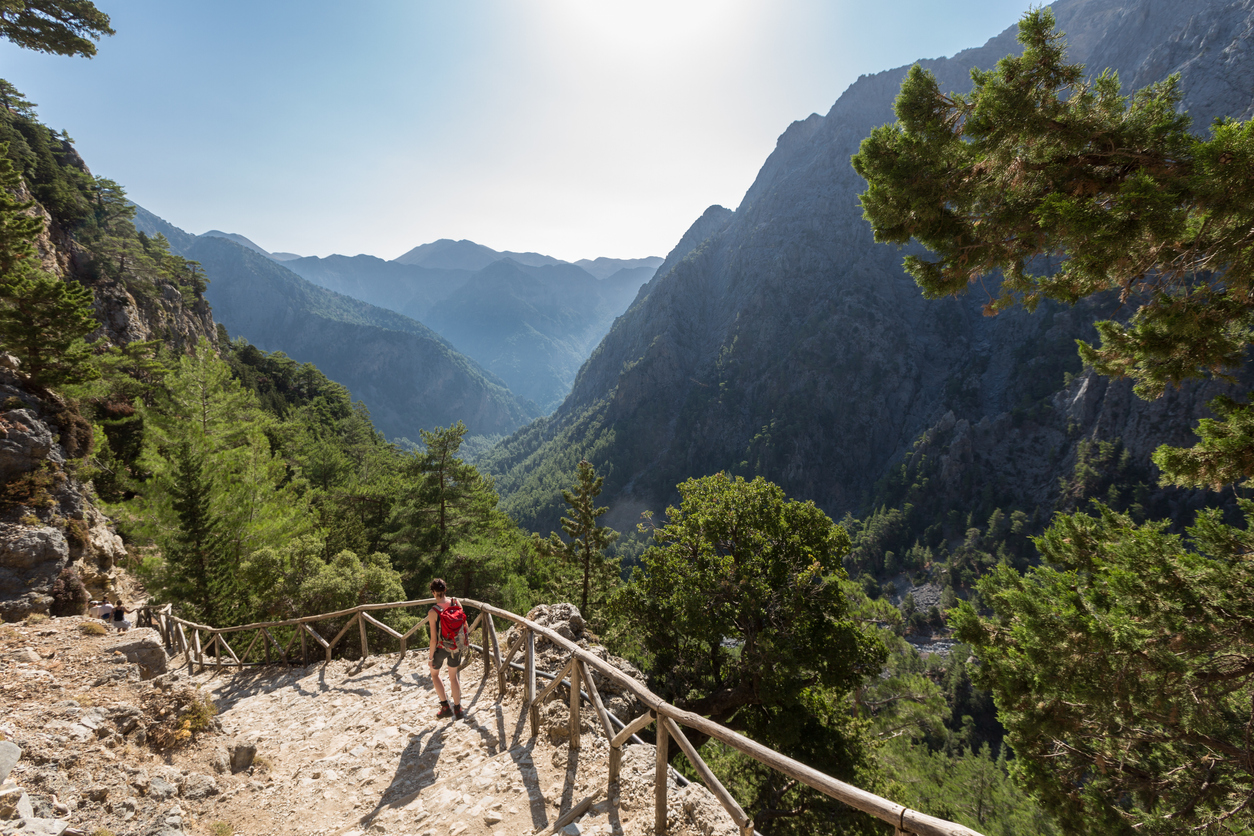 And of course there’s a big, beautiful island beyond, with beguiling cities, towns, beaches, and ecotourism possibilities. West of Heraklion, the Rethymno region boasts a capital of the same name with a beautifully well preserved Venetian old quarter as well as myriad pretty beaches, villages, and hiking and caving opportunities amidst lovely countryside. And beyond that, occupying the western third of Crete, the eponymous capital of the mountainous Chania region (also known as Hania) is a charmer with its own mazelike, Venetian-era old town, as well as superb local dining (don’t miss Cretan specialities such as sweet little kalitsoùnia cheese pies, lamb served with spiny chicory, fried boubouristì snails, and honey-dipped kserotigana spiral pastries).

Out in the Chania countryside, get a taste of traditional village life in dozens of charmers like Kissamos, Paleochora (also home to a very nice beach), and Sfakia. And of course there are at least 20 fantastic beaches to choose – from fully equipped to castaway covers – with stars including Domata, Elafonisi (especially celebrated), Glika Nera (this one’s got a nude section, by the way), Loutro, Mamara, and Stavros (upon which Anthony Quinn capered in the 1964 classic Zorba the Greek). And the eco-minded will absolutely love Samaria Gorge National Park (above) in the Lefka Ori (White Mountains) of southwest Chania, centred on Europe’s second longest gorge – 17 kilometres (11 miles) – and by most reckonings Crete’s most stunning spot; you can hike the best bits in about three hours. 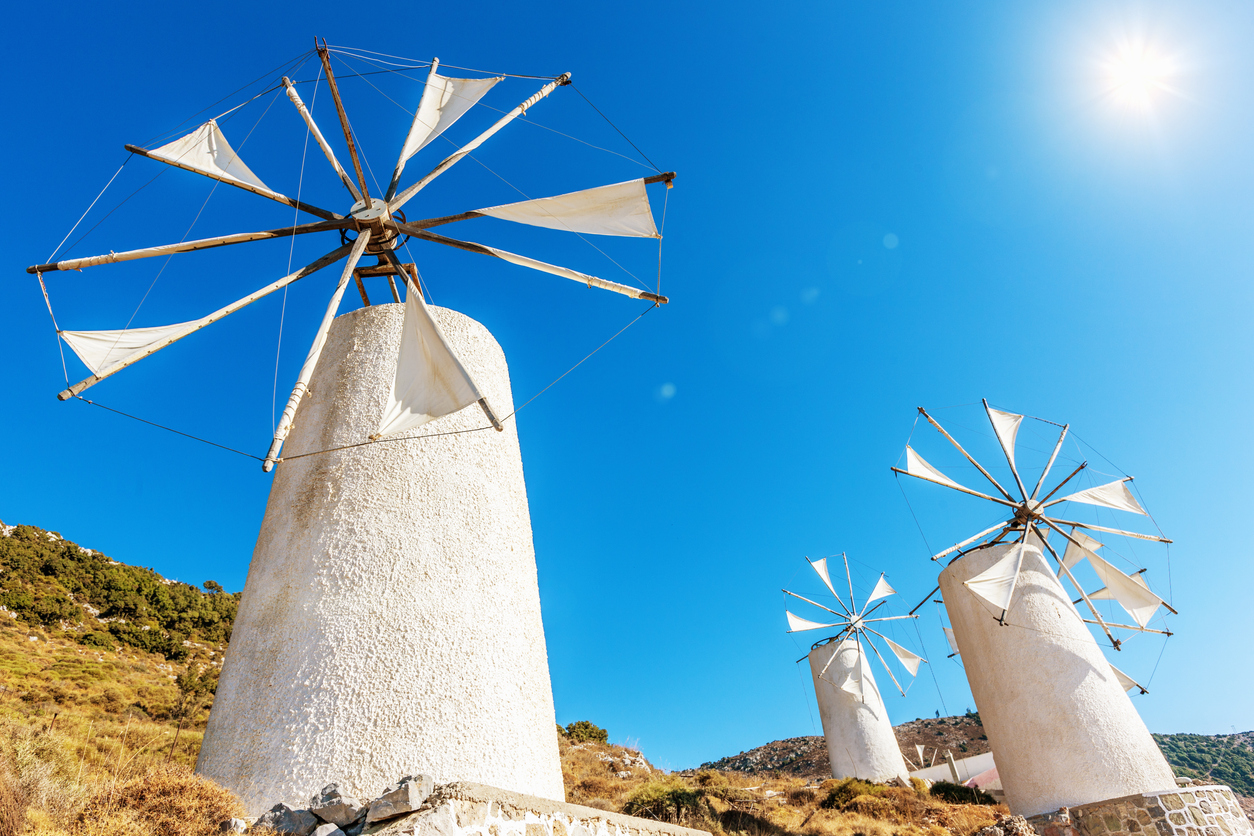 Finally, the area east of Heraklion, Lasithi, offers a similar mix, except amidst somewhat less hilly/mountainous surroundings. Its medium-size capital Agios Nikolaos (sometimes dubbed Ag Nik for short) is a bustling port popular with holidaymakers attracted to great nearby beaches, and also has a cool arty side. Area highlights include the Oropedio Lasithiou, a plateau with a pretty capital village Tzermiado and famous for its whitewashed, early-20th-century irrigation windmills (above); the ruins of Karfi up in the Dikti Mountains – thought to be the final redoubt of the Minoans as invaders from Greece pushed them out of the rest of Crete (other Minoan sites in Lasithi include Fornou Karifi, Gournia, Pyrgos, Vasiliki, and Zakros); and date palm forest of Vai, with an extra bonus of the gorgeous adjacent beach and nearby Moni Toplou monastery, dating back to the 15th century.

And speaking of beaches, you have more than 85 to choose from, the the best which include several on tiny Chrissi Island off the south coast (some nude sunbathing out here, too), as well as Asprougas, Filadelfia, and Kedromouri. And other cute traditional villages to explore include Kritsa, Palekastro, and Plaka; an extra benefit for this last one, just 15 minutes up the coast from Ag Nik, is a quick ferry hop over to tiny offshore Spinalonga Island (known locally as Kalydon), with Venetian and Ottoman fortifications as well as a onetime leper colony (the last in Europe, occupied up until 1957); it’s actually a popular tourist day trip thanks especially to being featured in books and films such as the 1970s BBC series Who Pays the Ferryman? and the 2005 novel The Island.

So if you’re looking for a beach holiday in the Med, that’s all very well and good, but Crete is also akin to its own country in miniature that will fascinate you and engage all your senses; truly you’d have to be a cretin not to come meet the Cretans and experience their amazing island – and Iberia is thrilled to take you there!