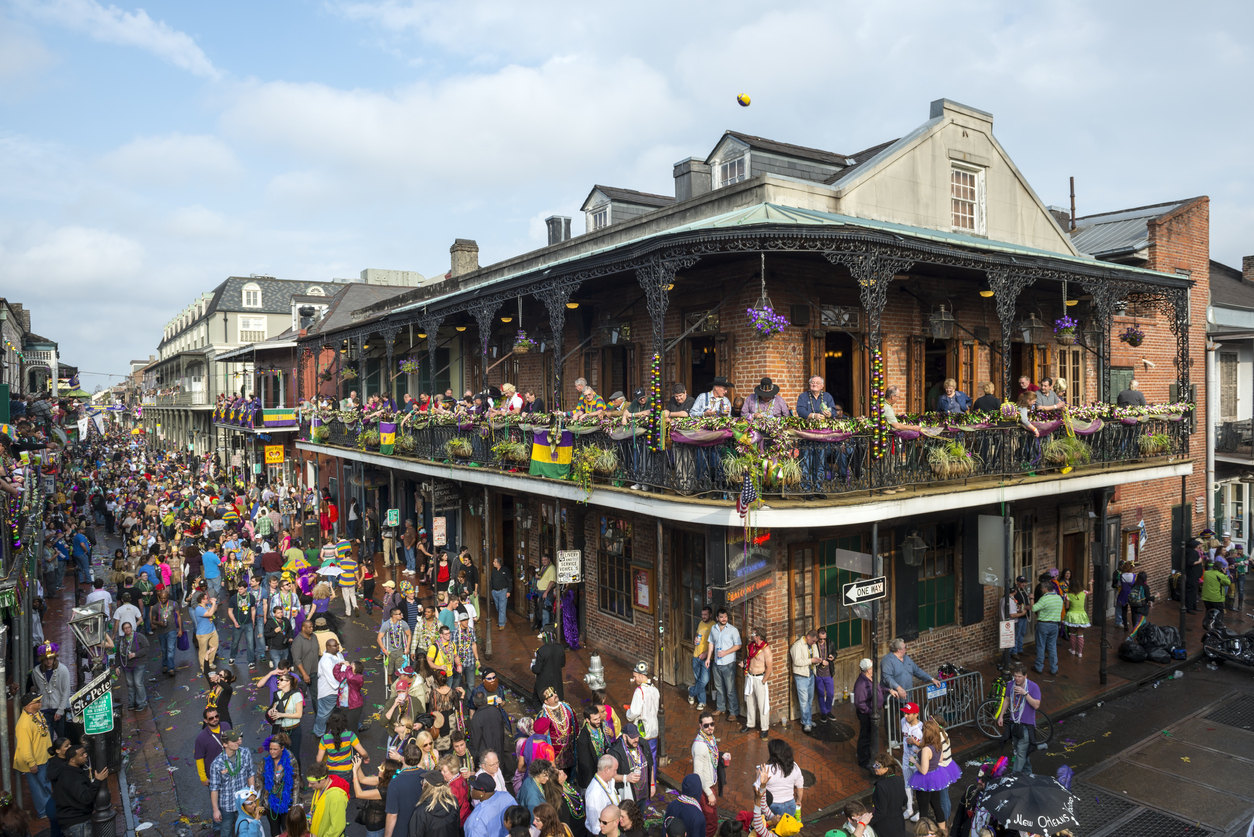 Truly, very few US cities have such a particular flavour, colour, and culture as the Crescent City, and that goes all the way back to its origins – founded in 1718 not by the usual English or Spanish but rather the French, who named it their settlement after the Duke of Orléans Philippe II, France‘s Regent at the time. Add to that the new U.S. influence following the Louisiana Purchase of 1803, and the musical, religious, and other cultural influence of what became a majority-black population – fed originally by the mass importation of African slaves, then followed by immigration from the Caribbean. Stir in the easygoing, fun-loving spirit of the locals (hence that famous local motto laissez les bons temps rouler, “let the good times roll”), and the result is a spicy, savoury gumbo unlike any other in this country and perhaps the planet. One of the proverbial bucket-listers for all travellers, now it’s time to dive right into the Big Easy – allons-y! 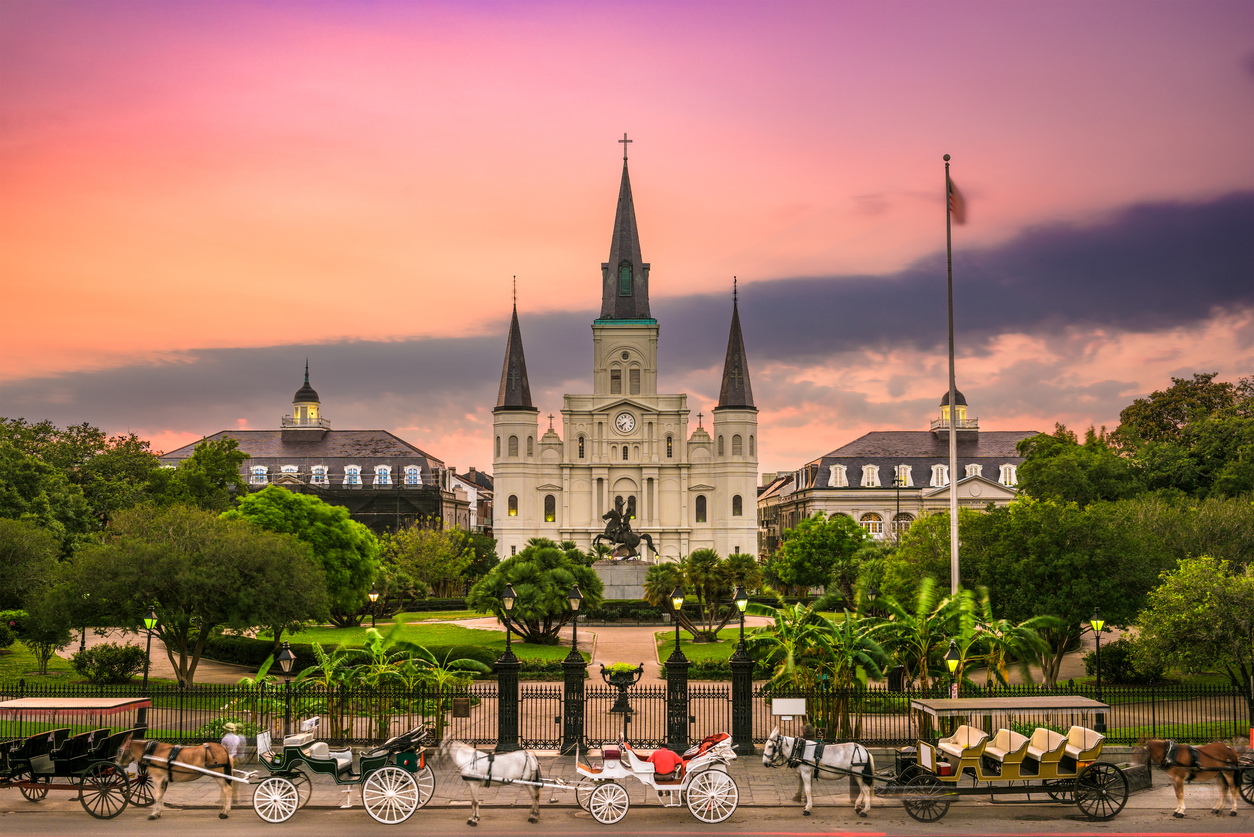 The wrought-iron-balcony- and often reveller-lined streets of central New Orlean‘s Vieux Carré (aka the French Quarter, top) are of course the city’s most iconic, dating back to the late 18th and early 19th centuries, during the period (1763-1801) when Spain ruled the Louisiana territory, and especially in the early decades (particularly the 1820s) after the Louisiana Purchase by the United States. Covering some 78 square blocks, the Quarter has as its hub Jackson Square, site of three of NOLA‘s top colonial landmarks, all dating to the Spanish era: St. Louis Cathedral (the oldest in the USA, though most of what we see today dates to an 1850 rebuild), the Cabildo (once the city hall, now a museum of Louisiana history), and the Presbytère (so named because it was intended for Catholic Church use, but ended up as the state supreme court before also becoming a museum in 1911 – currently housing exhibits on Mardi Gras as well as 2005’s Hurricane Katrina and its aftermath). 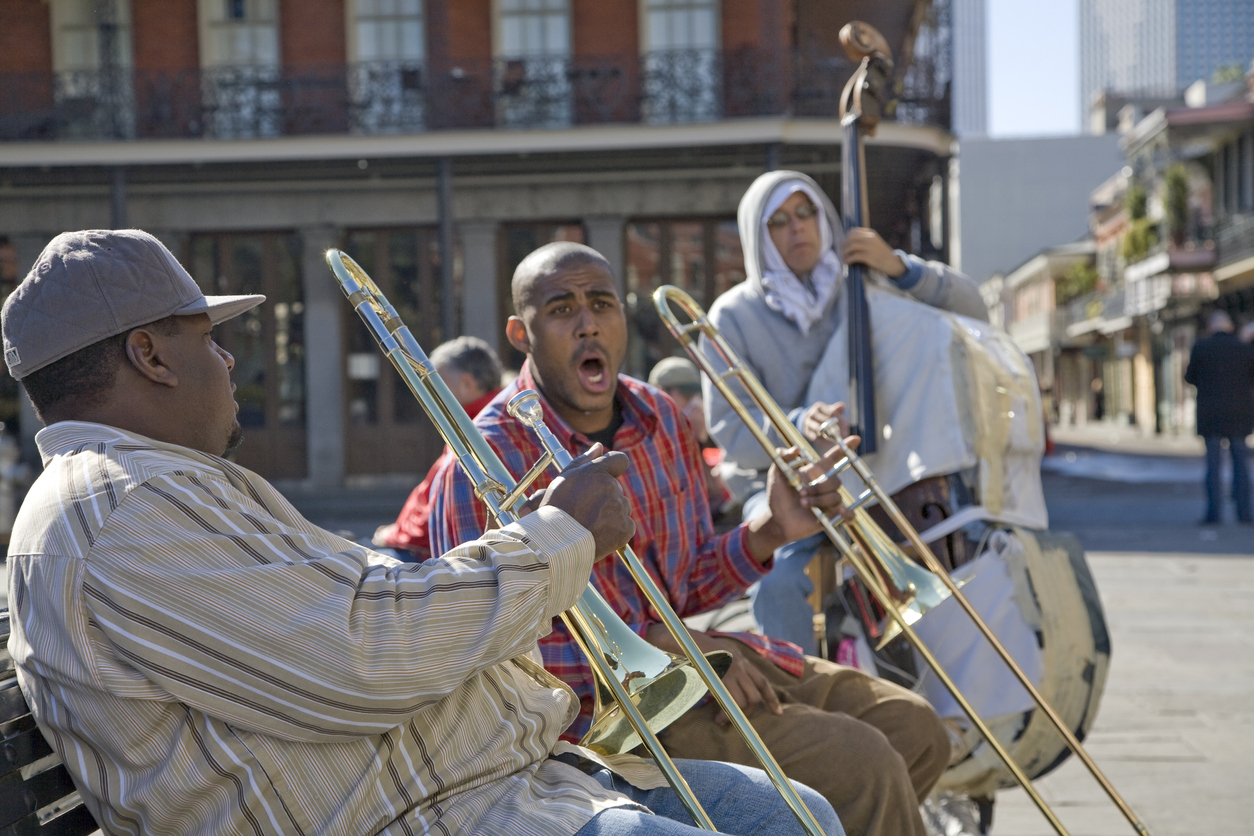 Then, besides the famous bars, restaurants along Bourbon Street and neighbouring streets of the Quarter, highlights here include the French Quarter Visitors Centre, the Old Ursuline Convent Museum (completed in 1752, it’s the USA’s oldest French-colonial building), a great jazz museum, a pharmacy museum in the USA’s first licenced pharmacy (1816), and a variety of period houses including the Beauregard-Keyes House, the Hermann-Grima House, Madame John’s Legacy, and the 1850 House.

And of course no visit is complete without exploring Lousiana’s traditions of voodoo, witchcraft, the occult, and alternative spirituality in spots like Marie Laveau’s House of Voodoo, Hex: Old World Witchery, the Voodoo Museum, Voodoo Spiritual Temple, and A Bloody Mary Haunted Museum and Le Spirit Shop (which also offers paranormal- and psychic-oriented tours of the Quarter), and the Boutique du Vampyre. 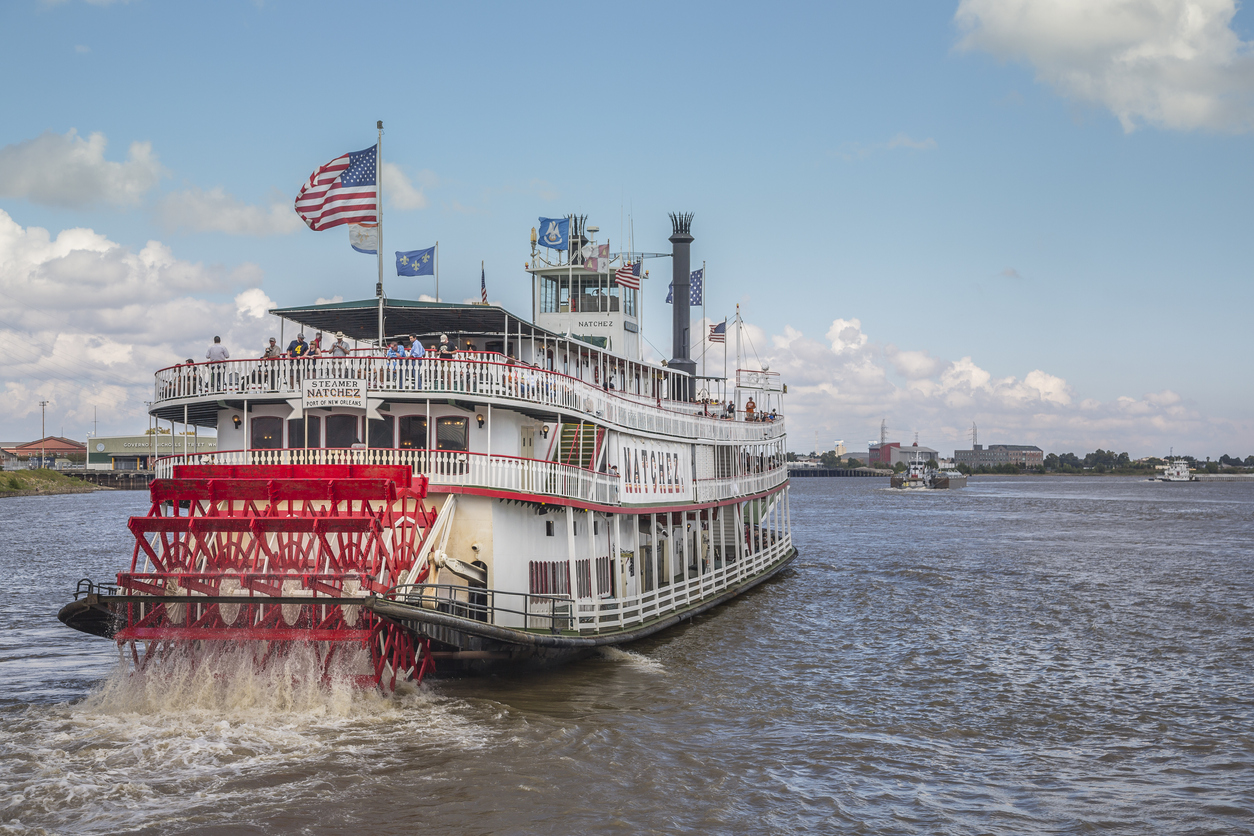 If you have enough time, you can also take in a stage production at the 103-year-old Le Petit Theatre; and hop aboard the famous streetcars as well as the Steamboat Natchez (above), an early-20th-century paddle-wheeler which offers a variety of cruises on the harbour and Mississippi River, all including live jazz.

Keep in mind, too, that other of the dozens of attractions include the Audubon Aquarium and Audubon Zoo, as well as distinguished museums such as the New Orleans Museum of Art, the New Orleans African American Museum, and the Ogden Museum of Southern Art.

Plus you’ll want to make time for several other key neighbourhoods, as well. Head north into the Faubourg Marigny, where Georgian, Creole, and Greek Revival houses nestle together along with trendy restaurants and shops, along with of course the famous jazz clubs of Frenchman Street.  West of the Quarter, Tremé is one of the oldest, and still a centre for black and jazz culture, centred on Congo Square (and given a huge boost in visibility by the eponymous HBO series which ran 2010-13). The Garden District is of course known for its gracious live-oak-lined streets and Victorian manses, as well as its share of restaurants, shops, galleries, and Lafayette Cemetery No. 1, one of NOLA’s famous and extremely atmospheric above-ground graveyards (above; all of this made even more sought out by former resident Anne Rice‘s Vampire Diaries). 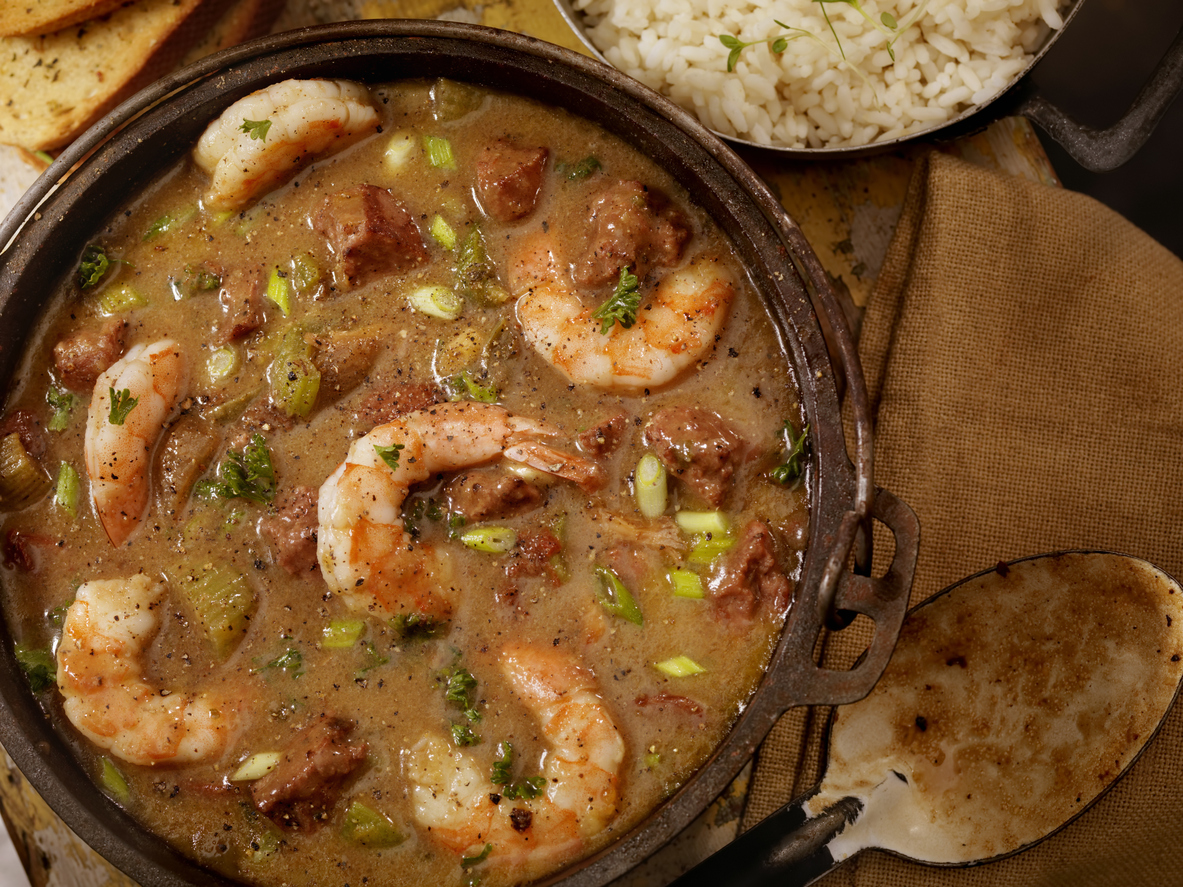 Byeond besides jazz and voodoo/the occult, another bit of culture that especially distinguishes NOLA is its cuisines, Creole (a bit more sophisticated) and Cajun (more rustic, with lots of seasoning), drawing from a rich palette of European influences (especially French, but also Spanish, Italian, and even ein bisschen German) as well as Choctaw, Caribbean and African.

So as you can imagine, many New Orleanians take their eating quite seriously, and the city has more than its share of fantastic restaurants, including classics that have been around for generations – some more than a century – such as Antoine’s (the oldest, founded in 1840), Brennan’s, and Galatoire’s. But the new foodie scene has added tremendously to their number of late, while those less inclined or able to splurge have plenty of more affordable options. And those who want to take it a step further can get cooking demos and classes at Crescent City Cooking School and New Orleans School of Cooking. Yes, you might want to consider a diet or buying stretch pants before visiting to be able to take unabashed advantage of it all.

Finally, if you’re up for the crowds and the craziness, by all means do come (and book weeeeell in advance) for one of the city’s norotrious no-holds-barred annual parties – not just its world famous Mardi Gras (January-February, with the height of the 2020 festivities falling 22-25 February) but also the French Quarter Festival (2-5 April), the Jazz & Heritage Festival (23 April-3 May), the gay Southern Decadence (29 August-2 September), and the pre-Halloween Voodoo Music + Arts Experience (25-27 October); find many more here.