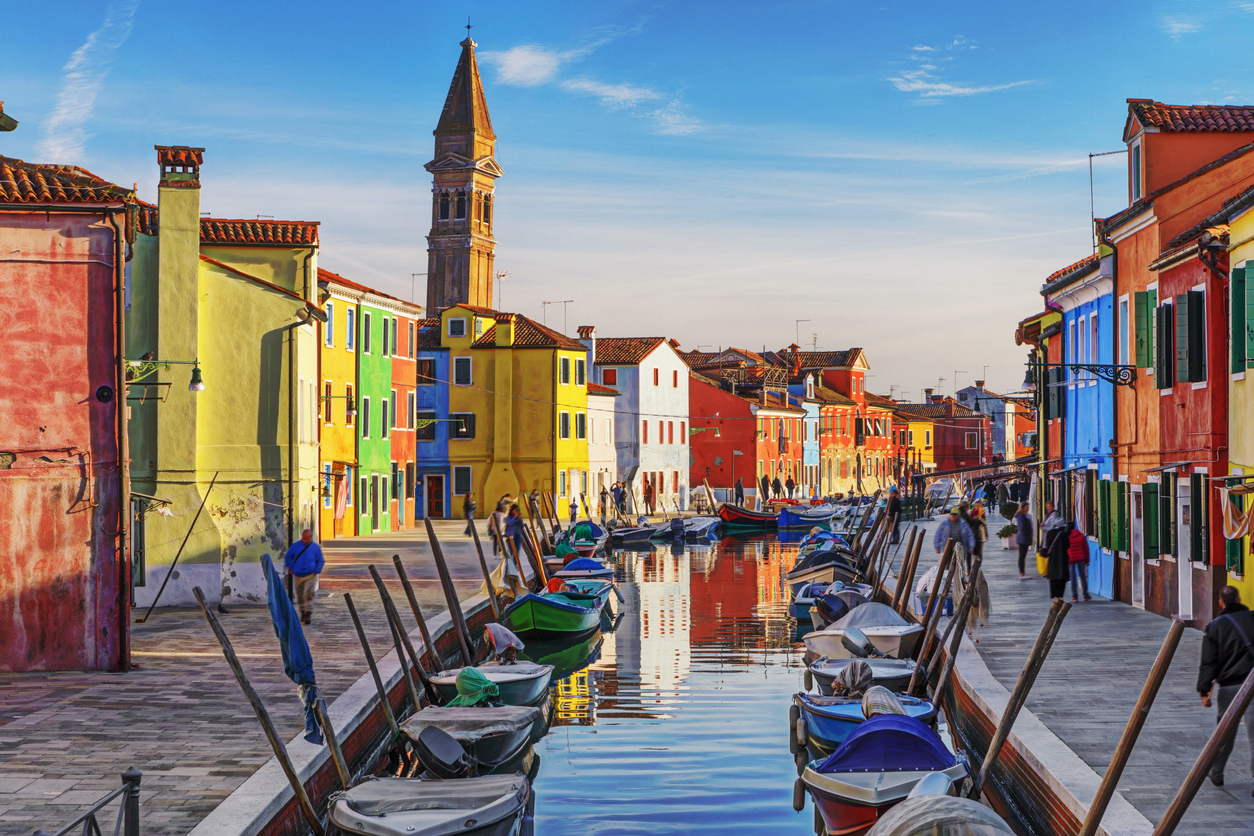 Regardless of which time of the year you visit Venice, there will almost always be crowds jostling around the Serenissima. Even the dreaded Acqua Alta has its fans, enthusiasts who love to splash knee deep in water across the planks spread out over St. Mark’s Square. Only the Venetians themselves aren’t amused – and neither are the otherwise omnipresent pigeons.

But a short vaporetto (water bus) ride away , you’ll find another world on the islands of the northern Venice Lagoon. Ancient maps show that once there were more than 70 islands, many of which have either disappeared in the silt or have been abandoned because of malaria or the tides (we’re talking Middle Ages here – no malaria anywhere today!). Of those remaining, there are four which will delight you because of their natural beauty (inspiring many a painter), their history and traditions and their slower pace of life (at least once the day trippers have left): Murano, San Michele, Torcello, and my favourite, Burano. 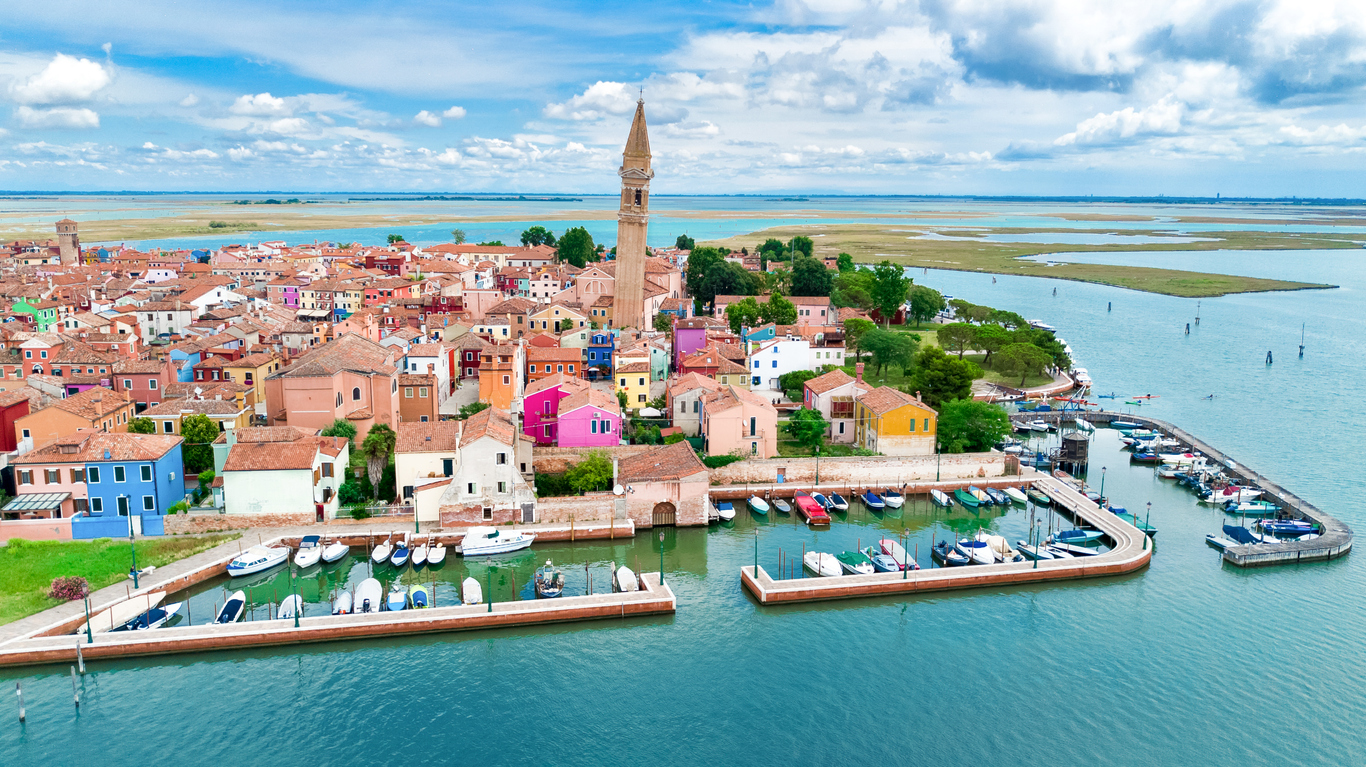 Reachable (other than by very expensive water taxi) by vaporetto no. 12, 45 minutes from the Fondamenta Nove stop near Venice’s Rialto Bridge, Burano is actually four smaller islands linked by bridges, and with a current permanent population of barely 3,000 spread out across just over 21 hectares (52 acres), Burano was settled in the 6th century by people fleeing the mainland from invaders. They made, and many still make, their living from fishing, until in the 1500s fine handmade merletto (lace) also became a thriving cottage industry, in high demand all over Europe, and today it along with the idyllic canals and brightly painted houses, is what Burano is most reknowned for. You’ll also see plenty of glasswork made famous by neighbouring Murano island. 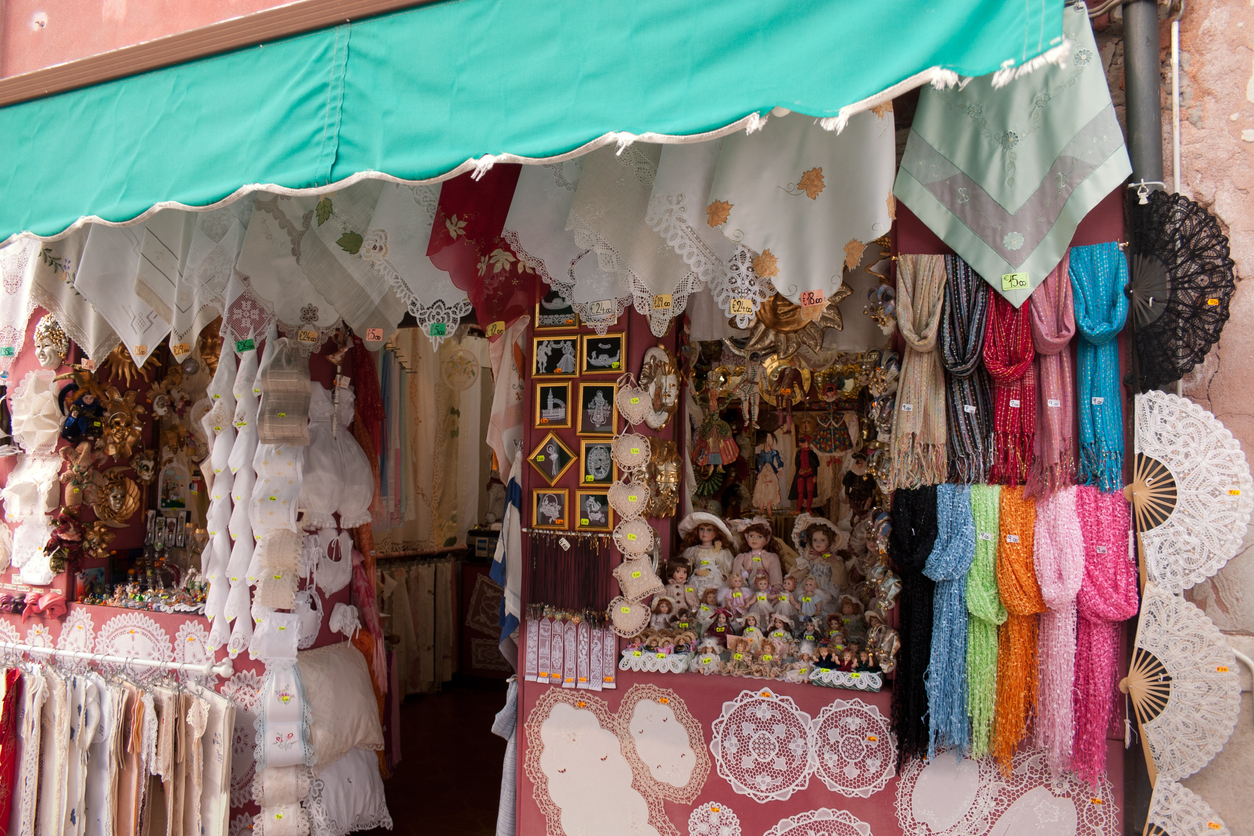 Now, if you arrive on Burano during an average day, you’ll surely wonder where is this slower pace of life of which I speak, because it’s a highly popular excursion from Venice, and the main square Piazza Galuppi and street Via Galuppi are packed with day trippers browsing souvenir shops – where, by the way, most of the cheap lace is machine-made from China (the real thing doesn’t come cheap; a hanky can set you back up to €80 due to how labour-intensive the work is). You will, by the way, want to pop into the 16th-century San Martino Church on the piazza (with a leaning belltower and a Crucifixion by Giambattista Tiepolo), as well as the Museo del Merletto (Lace Museum), housed in a Gothic building once home to a lacemaking school, and the Pescaria Vecia (Old Fish Market) on the Fondamenta di Cao Moleca. 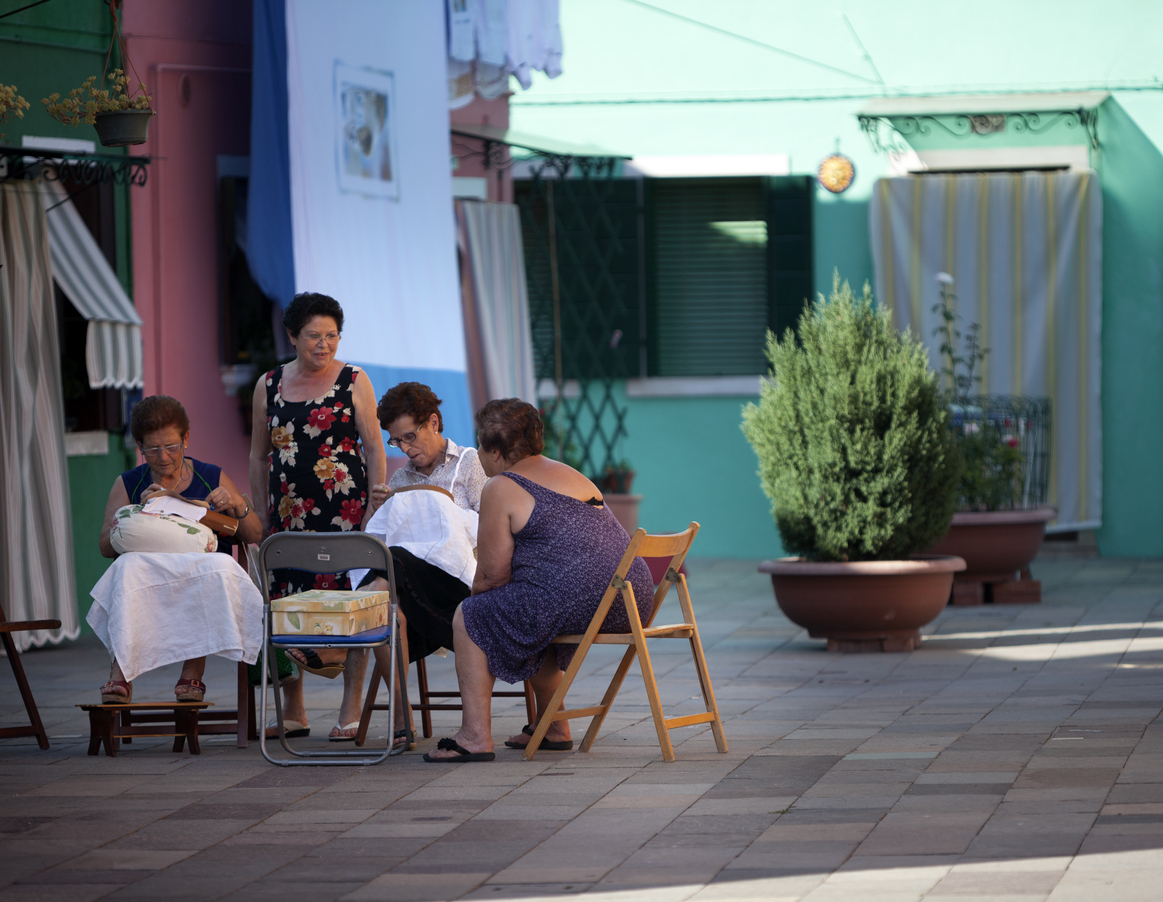 But there are ways to avoid the crowds. The first suggestion is to come early in the morning before the package day tours arrive – or even better, stay overnight, because once the tourists have left at the end of the afternoon, you’ll see the locals sitting out in front of their multi-coloured houses, glowing in the sinking sun, enjoying a chat with their neighbors – or, if you get very lucky, even spot an older lady or two making lace (above). There’s a good hotel and resort out here, but a good number of visitors opt to stay in small bed and breakfasts and rental flats, many occupying those famous coloured abodes. There are two theories as to why these houses are so brightly hued: one is that in olden times, the fishermen could find their houses easier when coming in from the sea in dense fog, and another to clearly mark where one property starts and another ends. Whatever the truth, the result is tremendously picturesque – and dare I say eminently Instagrammable. 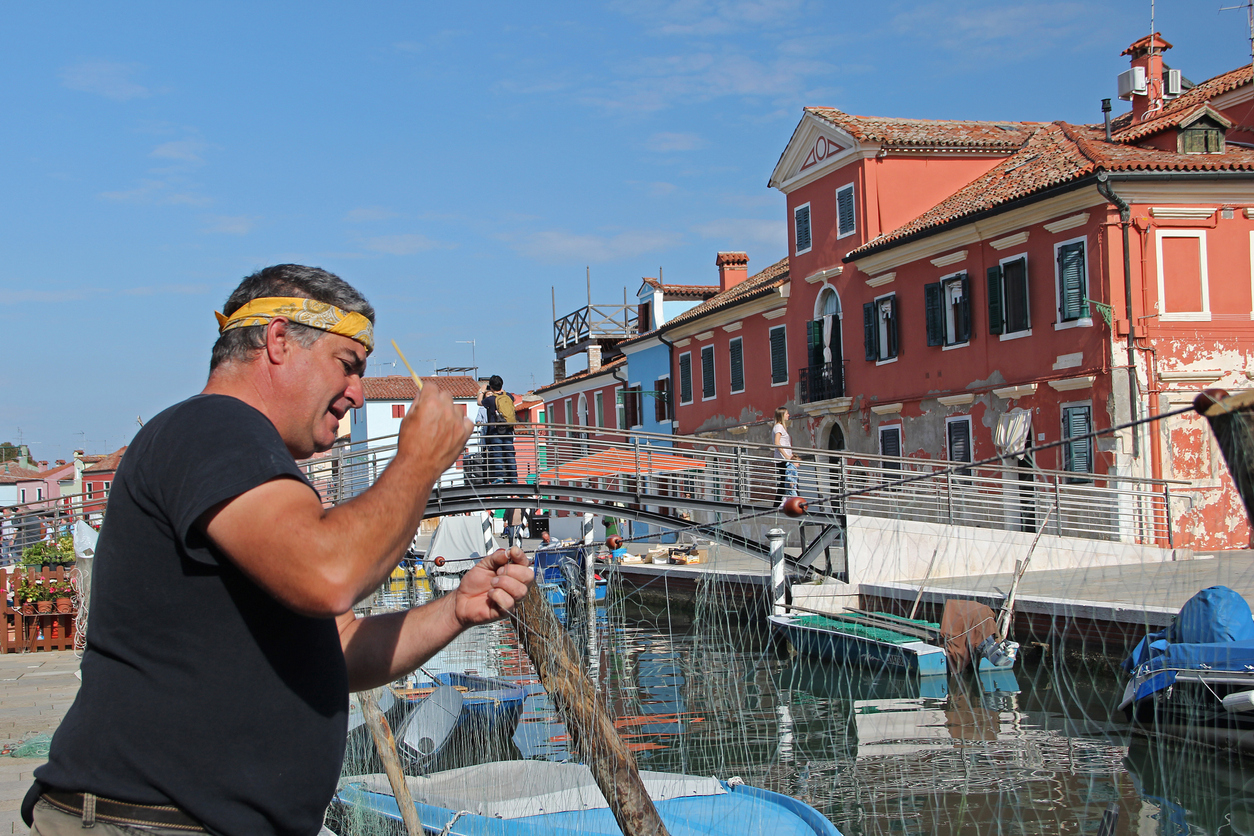 Plus, whether or not you have time to overnight, I also recommend striking out from the Via Galuppi and meander through the side streets to seek out small restaurants and trattorias (unsurprisingly, fish is a speciality – in particular, look for risotto and other dishes featuring gò – goby – fresh from the Venetian lagoon).

Another enjoyable adventure is a boat trip with Pescaturismo Nettuno, run by Enrico and Domenico, a pair of fishermen who will take you out in a traditional fishing boat to explore the waters of the lagoon and to learn all about Burano’s other traditional mainstay. 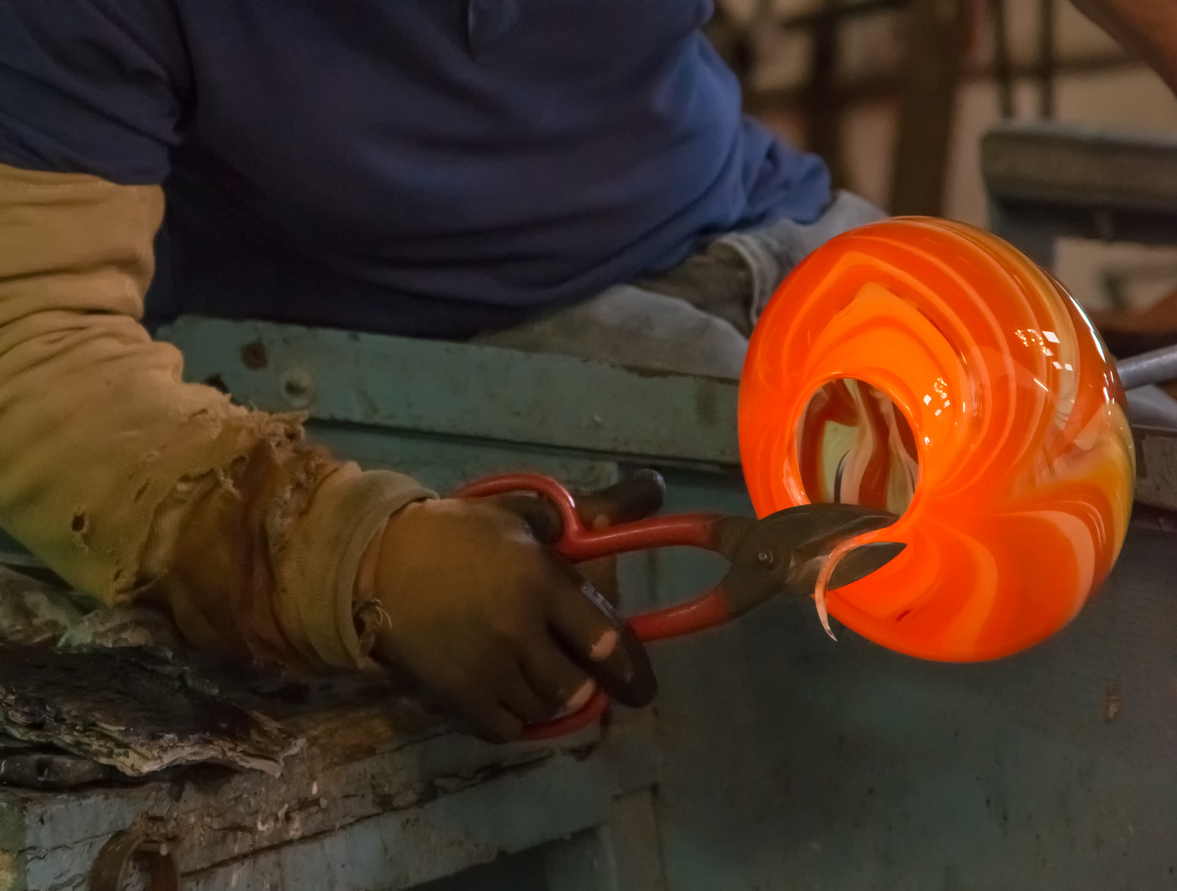 The Other Outer Islands

If you make your base in Burano for a day or two, you could can plan a visit to larger – but some feel less quaint – Murano and its world famous glass factories and shops (above, a half hour by vaporetto), or to Torcello (just ten minutes), which during the Middle Ages was more important than Burano but is nearly abandoned today. As witness to Torcello’s golden days stands the impressive 7th-century Cathedral of Santa Maria dell’Assunto (below), with fabulous Byzantine mosaics and another church nearby, and the 15th-century Ponte del Diavolo (Devil’s Bridge), very typical of traditional Venice, with no side railings. 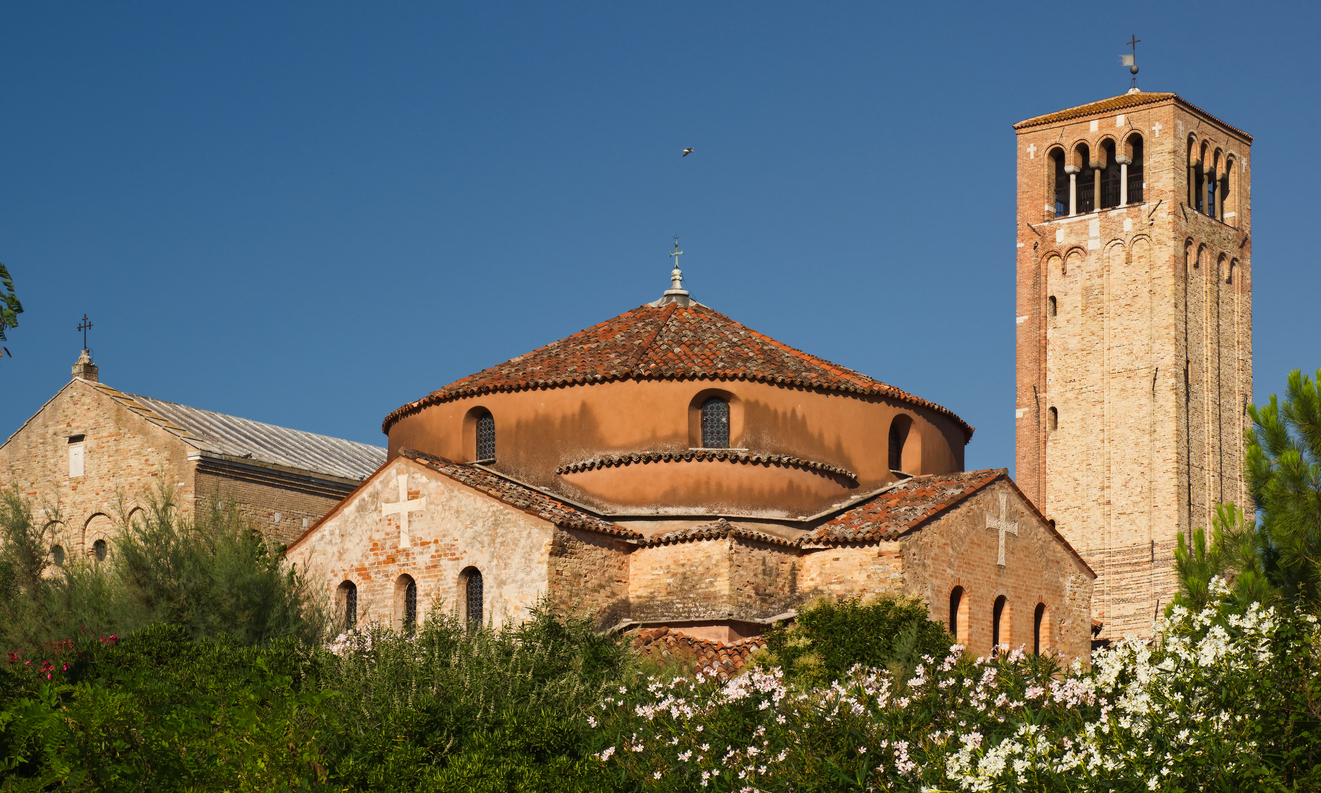 And finally there’s the also ten-minute hop over to San Michele, the isle of the dead. In the 15th century it was the seat of a monastery of Camaldolese monks, a branch of the Benedictines, and the adjacent church was Venice’s first Renaissance building. In 1804, when Napoleon invaded, he decreed that it was unhygienic to bury the dead in Venice itself, hence the creation of San Michele as the city’s burial ground. Approaching the island by boat, you see a massive wall behind which the secrets of the graves are hidden. It’s also the only opportunity to take a picture, because photography on the island is strictly forbidden. 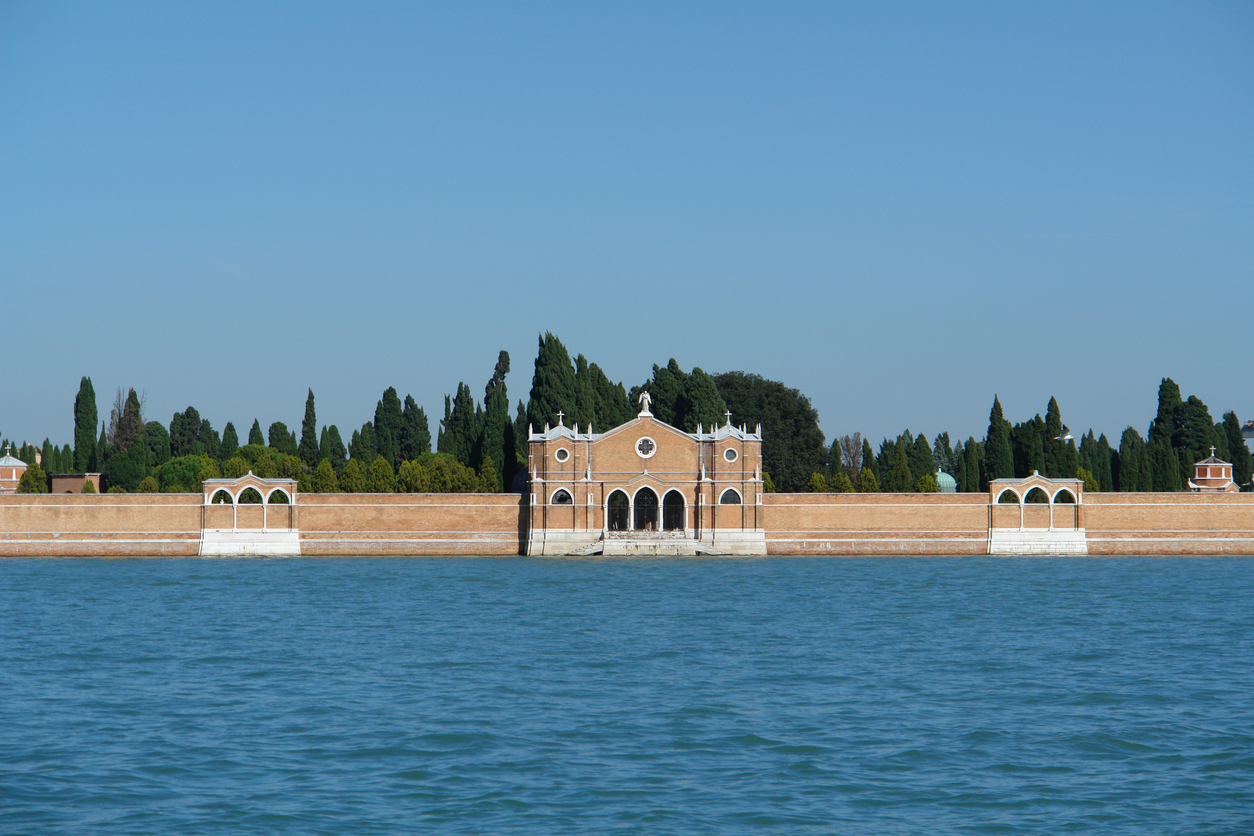 Get a map at the entrance, because the cemetery is vast  and divided into several sections according to religion; even a handful of famous people, like Igor Stravinsky and Ezra Pound, found their a resting place here – but not forever, because since space is at a premium, since 1995 the dead can only rest in peace here for 10 to 20 years, then they have to be moved or cremated.

Remember that San Michele is not foremost a tourist attraction but a place of mourning and reminiscence, so show respect, be quiet, and dress appropriately – no shorts, bare shoulders, or tank tops. A funeral may be in progress, the coffin transported to San Michele in one of the traditional black and gold  gondolas. Also bring a hat and water, as there’s hardly any shade on San Michele, and no facilities apart from loos.