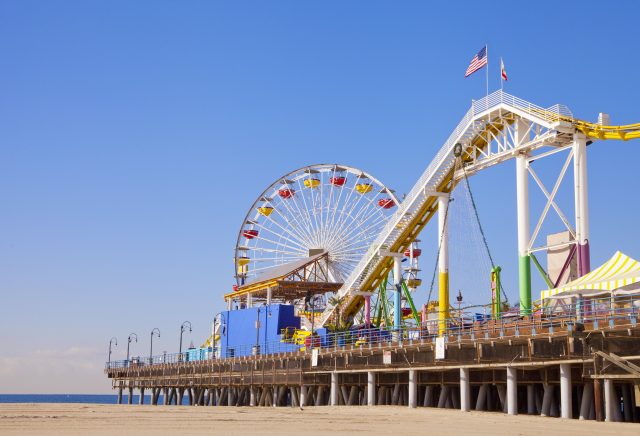 The USA‘s sprawling, second largest urban area is a great all-round destination for every type of traveller young and old, from fun-seeking singles to parents in search of family fun with their little ones. The kid appeal starts with the theme parks, but there’s a lot more for mom and dad to like about Los Angeles as well. Let’s have a look…

But of course the world’s most famous just has to top the list! Located in the suburb of Anaheim, it’s about a half hour drive inland from downtown L.A., and while the appeal for youngsters is obvious, Mom and Dad will also find it brilliant. The golden oldies are all here, of course, such as Main Street USA and Tomorrowland, but at the moment excitement is building to a fever pitch over the inauguration this 31 May of Star Wars: Galaxy’s Edge.

This 29-hectare (72-acre) park adjunct to Disneyland is, as the name suggests, California-themed all the way, starting with Buena Vista Street, an immersive recreation of Los Angeles of the 1920s, Disney’s founding era. Pixar Pier celebrates the state’s famous seaside boardwalks, and Grizzly Peak its wilderness, national parks, and nature. Then of course there’s Hollywood Land, and several other areas revolving around Disney movies, all liberally packed with entertaining rides and attractions. This one will especially appeal as much to parents as to kids.

Over the Hollywood Hills in the San Fernando Valley, built around the USA’s oldest film studio (est. 1912), the original – and still fascinating – studio backlot tour is these days dwarfed by the theme park, with myriad rides/attractions themed around movie/TV favourites such as The Simpsons, Despicable Me, King Kong, Jurassic Park, Fast & Furious, and The Walking Dead. Particular highlights: The Wizarding World of Harry Potter and Waterworld: A Live Sea War Spectacular. 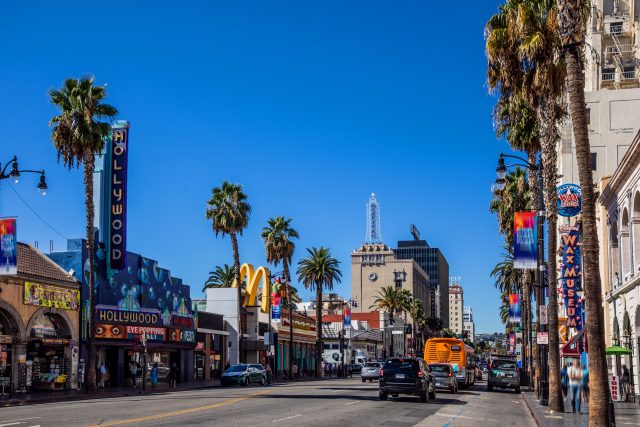 Atop Mount Hollywood in Griffith Park, adjacent to Hollywood and extends partway up into the Santa Monica Mountains, this 84-year-old observatory, space museum, and planetarium (plus a café run by Wolfgang Puck) is catnip for science nerds of all ages. And it’s even free of charge, except for a nominal fee for the frequent planetarium shows. Also free: the sweeping views out over much of the Los Angeles Basin  (including a close-up view of the famous HOLLYWOOD sign).

Visitors love checking out the more than 2,600 five-pointed terrazzo and brass stars embedded in the pavement along 15 blocks of Hollywood Boulevard and three blocks of Vine Street, each dedicated to entertainment-industry figures (with several notable exceptions, such as sport stars and astronauts).

Kids famously love dinosaurs, and Hancock Park in the Mid-Wilshire District is home to perhaps the country’s most famous dino site, which in addition to the tar pit itself (embellished by life-size replicas of Ice-Age mammoths and other species) also includes a cool museum with tonnes of fossils, skeletons, and recreations. Next door, by the way, is the Los Angeles County Museum of Art (LACMA).

Lions and tigers and bears, oh my! This 54-ha. (133-acre) spread, also in Griffith Park, is home to more than 1,110 animals of 130-plus species, with special sections for reptiles/amphibians/invertabrates, African gorillas, Asian elephants and apes, and rainforests of the Americas. Some of these are endangered; the zoo is especially well known for its programme of conservation/breeding of rare California condors. The botanical garden part is spread throughout the zoo grounds, with more than 7,400 plants of more than 800 species.


A Pretty Pack of Parks

Much of El-Lay may be “a great big freeway”, as the song goes, but it’s also packed with great green spaces. Besides the zoo and observatory, top of the list is the aforementioned Griffith Park – at 17 sq. kms (6½ sq. mi.) the city’s largest –  downright wilderness-like in some areas. It offers a wealth of activities such as hiking, biking, and horseback riding, as well as a theatre, vintage-train park and museum, cool caves, and more. Others include Echo Park Lake, El Dorado Nature Center and Regional Park, Grand Park, Hancock Park, Kenneth Hahn State Recreation Area, Lake Hollywood Park, Los Angeles State Historic Park, Palisades Park, Tongva Park, and yet more still.

At the top of downtown’s iconic US Bank Tower, everyone will get a kick out of the interactive overview of L.A.’s amazing entertainment and sport history and heritage, along of course with the sweeping views. But for the more daring, the real kicker is the Skyslide, a transparent-glass chute that shoots you more than 13 m (45 feet) down the outside of the building, nearly 305 m (1,000 ft.) up! 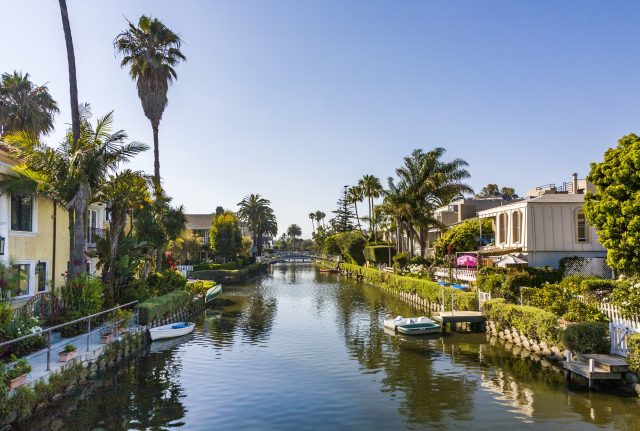 And a Couple of Cool Neighbourhoods

Out on the Pacific coast, the hippie-chic city of Santa Monica is a family favourite thanks mostly to the 101-year-old  Santa Monica Pier, with arcades, carnival games, a vintage carousel, a Ferris wheel, a roller coaster, an aquarium, plenty of shops from kitschy to funky, and free-of-charge summertime concerts and outdoor movies.

Then a less-than-ten-minute drive south will bring you to another city, creative Venice, where the whole family will be amused and bemused by Venice Beach‘s street entertainers, eccentric local characters, funky achitecture, rollerbladers, and assorted activities on the sands and beachfront boardwalk. And a few blocks in, you’ll be charmed by the Veneto district’s handful of remaining canals (above), dug in 1905 to evoke the city’s namesake.

And of course both of these seaside communities are perfect for biking en famille!

More info on family fun in the City of Angels: DiscoverLosAngeles.com.