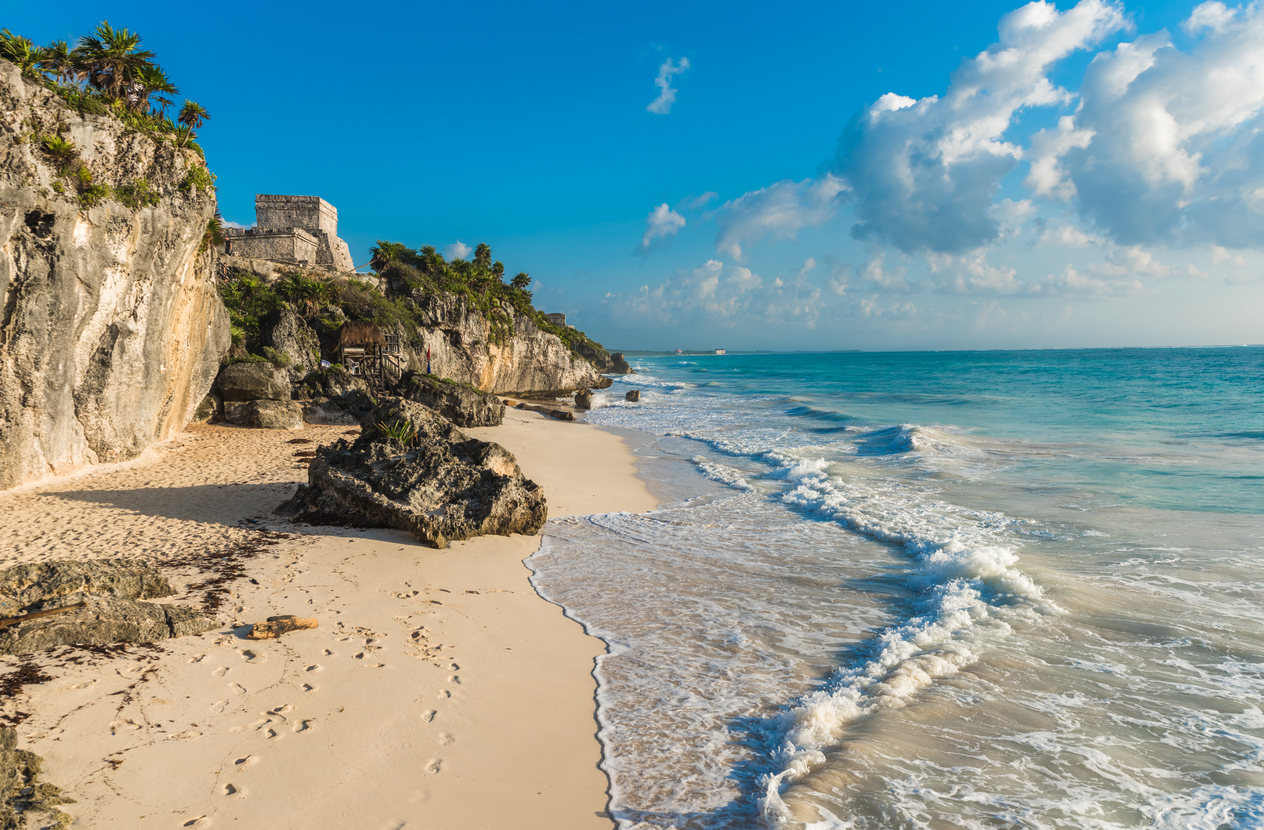 One of Mexico‘s top magnets for holidaymakers – home to eye-popping Mayan ruins, spectacular beaches, fun nightlife, Spanish colonial architecture, and unique ecotourism – the Yucatán Peninsula actually has two of the country’s 31 states: Yucatán and the much smaller Quintana Roo. But it’s the latter, along the Caribbean coast, that boasts perhaps the most all-round alluring package. The best known spot is of course holiday powerhouse Cancún, but there are many and diverse other options to keep you plenty busy all down the so-called Riviera Maya and beyond – and coming back for more – so as a longtime resident I’d like to offer my top 14, all within a two-hour drive of either Cancún or the state’s other main tourist city, Playa del Carmen: 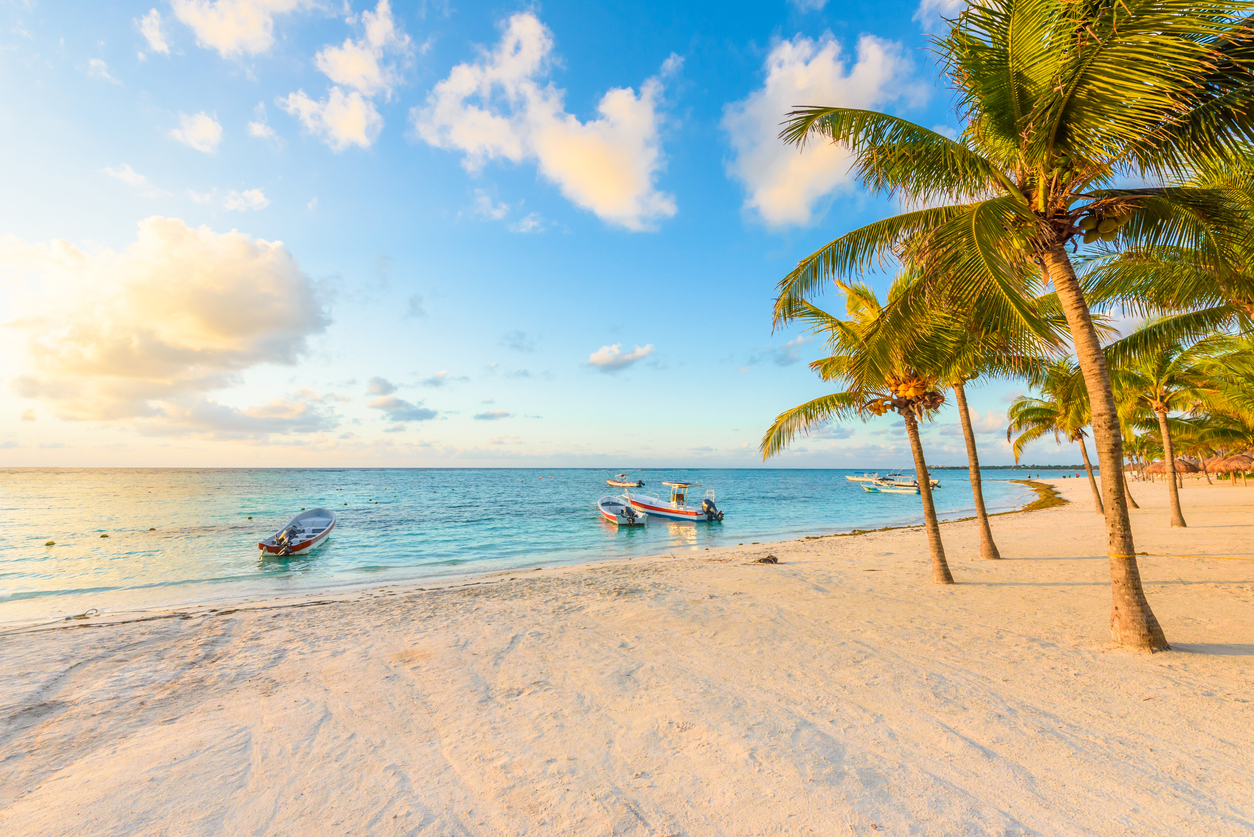 This town founded in 1958 as a community for scuba divers, today has just over 1,300 permanent residents (many of them U.S. and Canadian expats), and lures visitors with its lovely, five-kilometre (three-mile) beach and shallow bays with fabulous diving/snorkeling and the chance to swim with endangered green sea turtles. 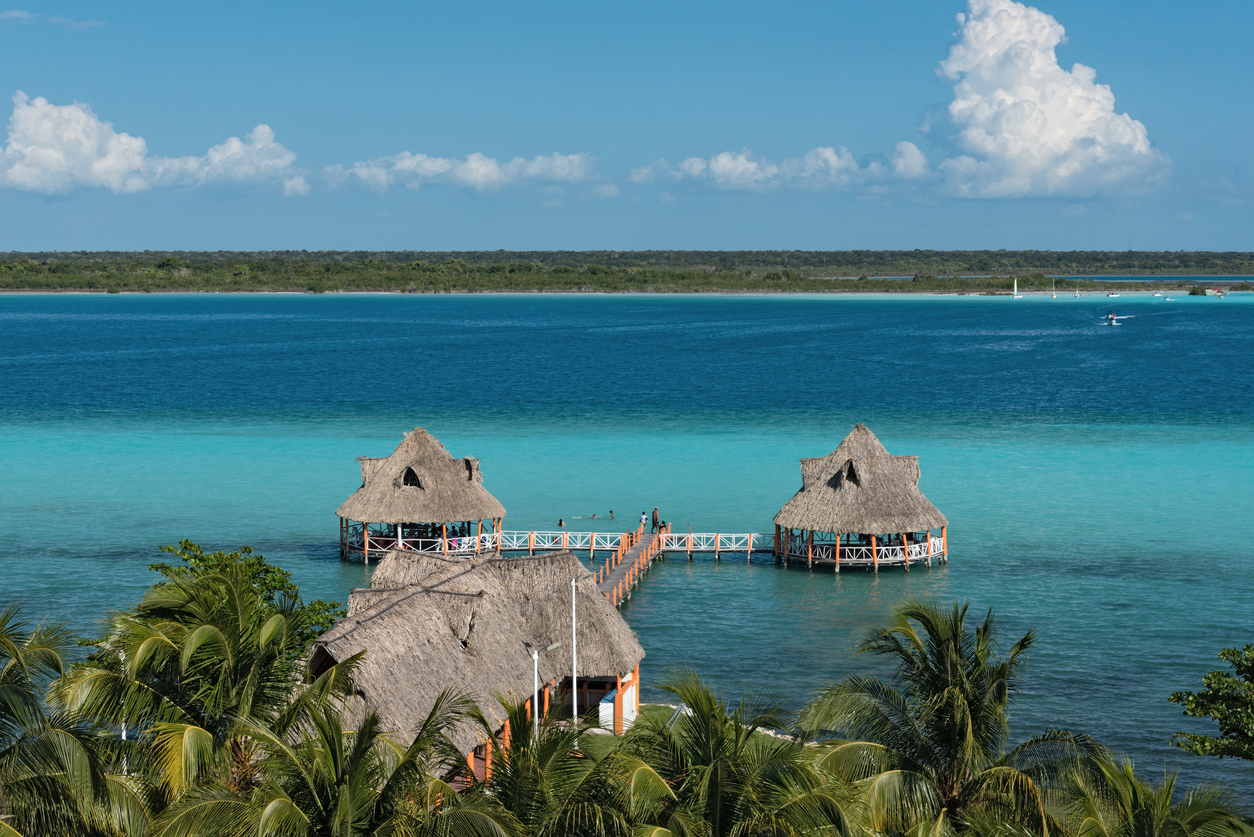 With a population of just over 11,000 and delightfully untouristy, one of the Yucatán coast’s lesser known towns is counted among Mexico’s 122 pueblos mágicos (magical towns) due not just to its mix of rustic Spanish-colonial architecture and its 18th-century San Felipe Fortress, but especially to its 60-km (37-mi.) “lagoon of seven colours” so called due to the multiple hues of the water. You can also swim, snorkel, dive, and go boating at the Uchben Kah Ecotourism Park, as well as explore the nearby Mayan ruins of Chacchoben and Ichkabal. 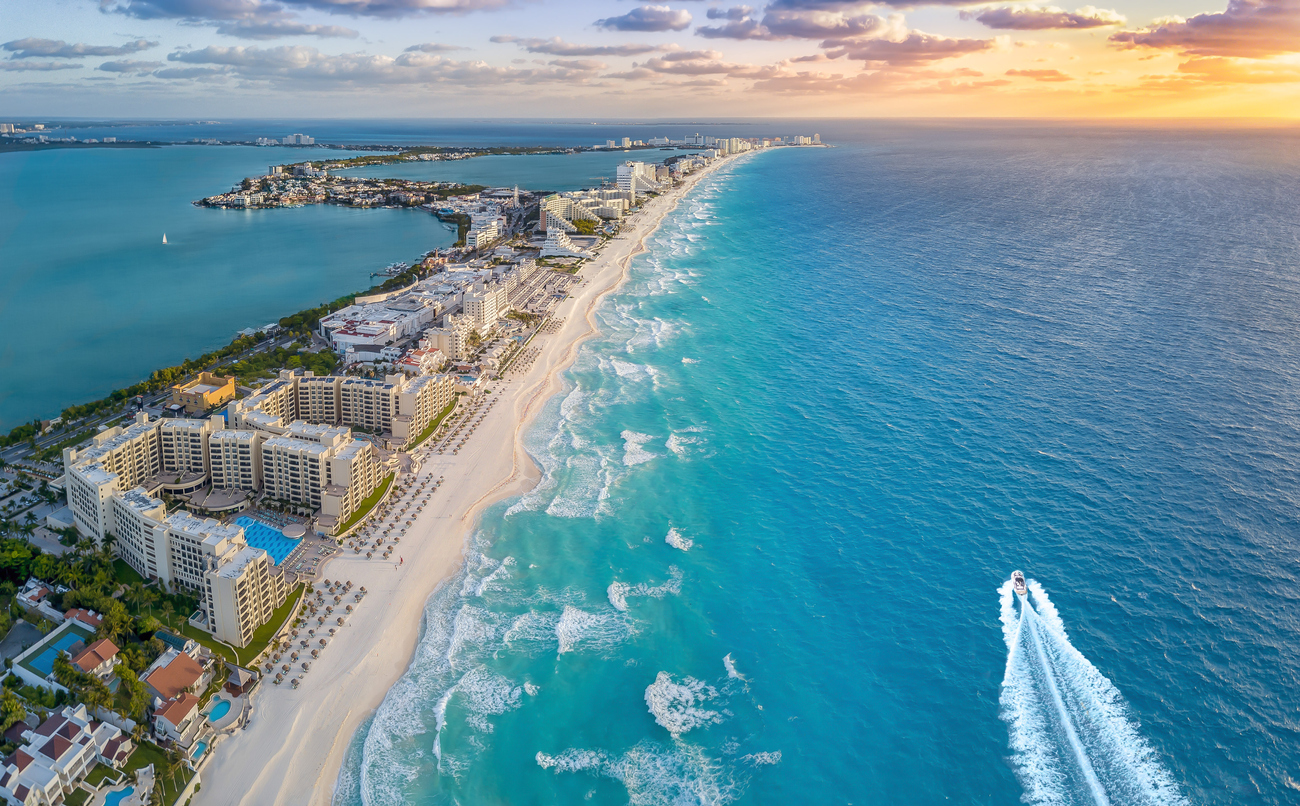 The state’s (and entire peninsula’s) Big Enchilada needs little introduction, of course. Beginning in 1970, national tourism authorities began developing a fishing village with lovely beaches into a world-class holiday mecca, and today its internationalised hotel zone is bursting with glitzy resorts, restaurants, shops, and nightspots, right alongside a city with a more down-home, “typical” Mexican flavour (not to mention its very own tiny Mayan archaeological site, called the Ruinas del Rey). 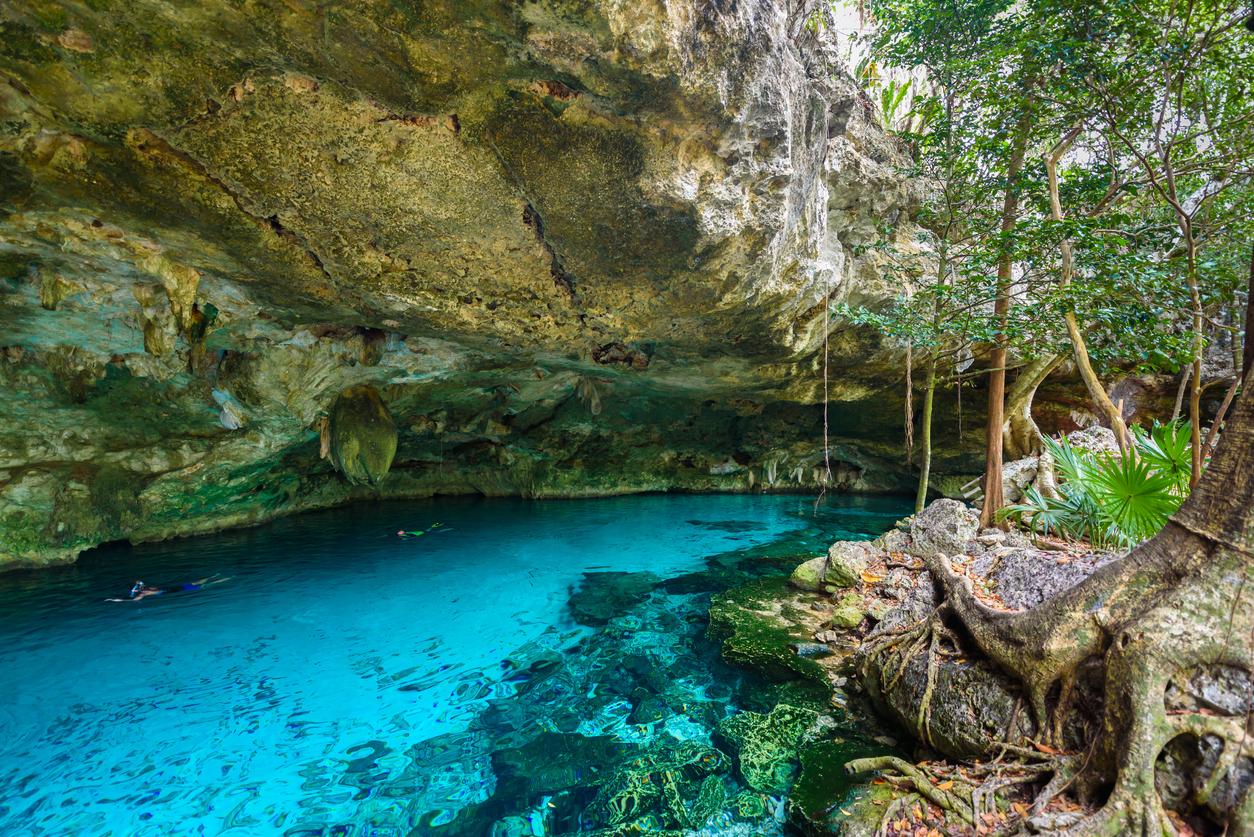 Pehaps the Yucatán’s most distinctive features apart from its archaeological sites are hundreds of water-filled sinkholes in the peninsula’s limestone bedrock. Considered sacred wells by the ancient Mayans, these days quite a few have been semi-developed for bathing, snorkelling, and for the more adventurous, cave-diving in their fresh, crystalline waters. Some are small, homely affairs, while others are more grandiose; prominent examples along this coast include Angelita, Cenote Azul, Dos Ojos, and Gran Cenote. 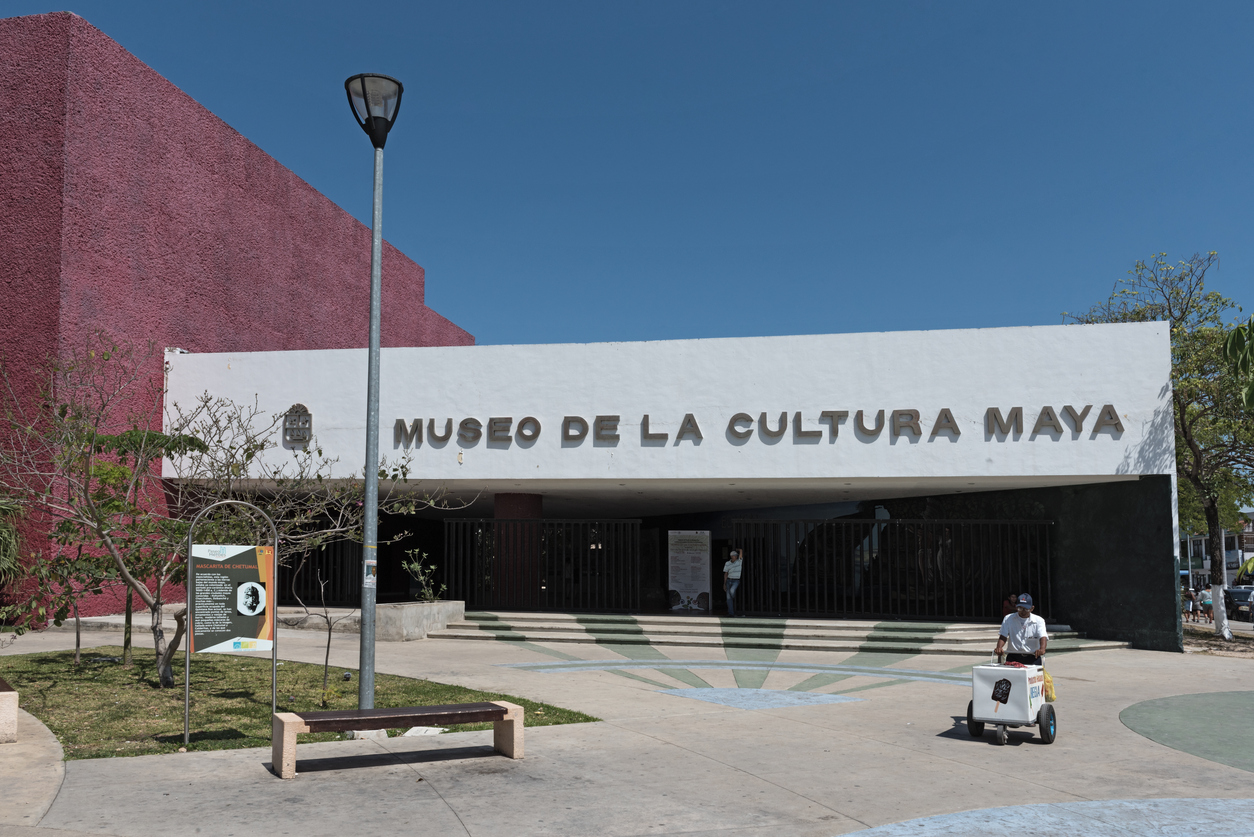 Way down south, just over the border with Belize, the laid-back capital of Quintana Roo state (pop. a bit over 151,000) is worth a day trip or even overnight thanks to its vibrant street culture, dining, city-history museum and especially its modern Museum of Mayan Cultur (above).

About a half hour inland from Tulúm (see below), this ancient Mayan site between two lagoons isn’t nearly as famous as Chichén-Itzá or Uxmal, but in some ways I like it even better. Built mostly between 500 and 900 CE and with a peak population of 50,000 spread over more than 80 square km (31 sq. mi.), today the jungle-swathed ruins of these towering pyramids and other structures (including the mandatory ball court) still exude a mysterious, Indiana-Jones exoticism that the better known, more excavated/developed/touristy ancient Mayan sites lack. 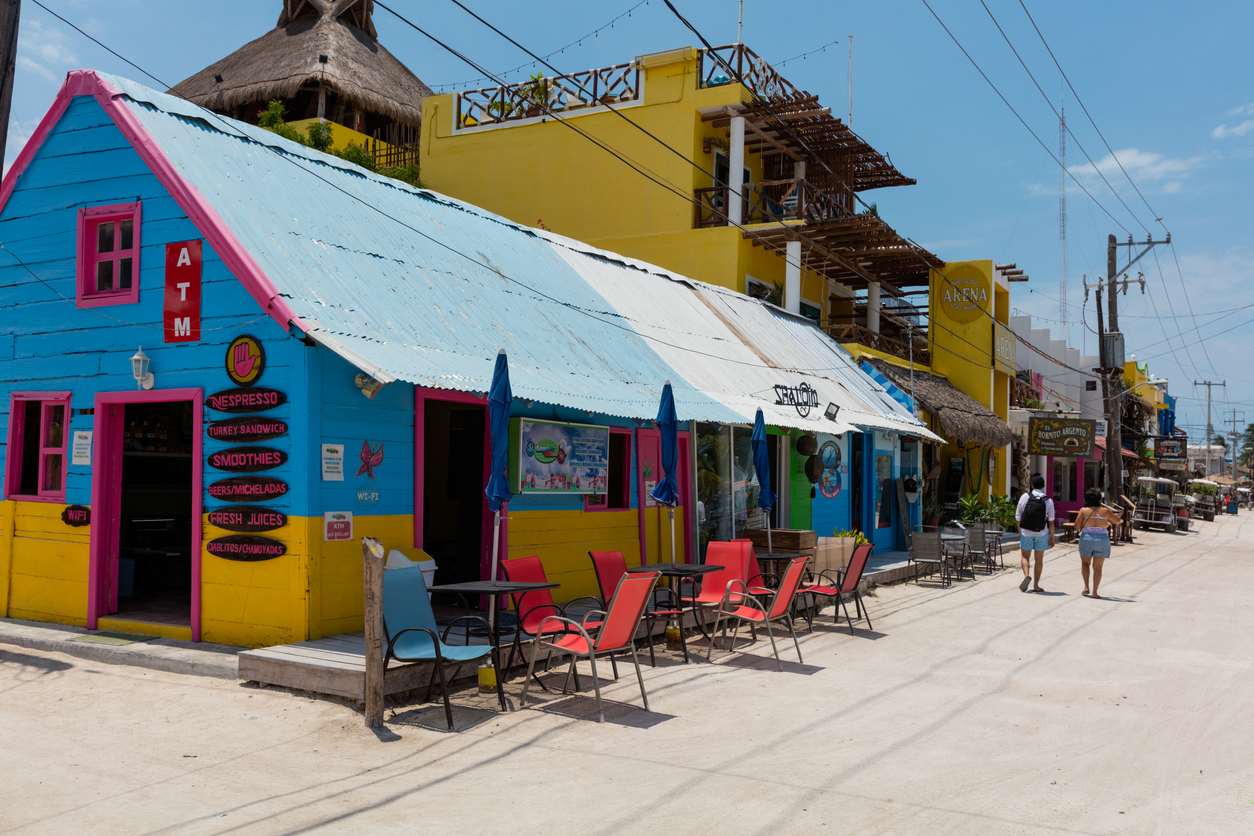 Take a bus or drive 2½ hours north of Cancún, then hop a 15-minute catamaran ferry from the village of Chiquilá, and you’ll find yourself on a tiny, mostly carless island of sandy unpaved roads, funky little hotels/eateries/bars, pristine beaches, and eco marvels including pink flamingos and hawksbill sea turtles. Truly a slice of barefoot Caribbean paradise. 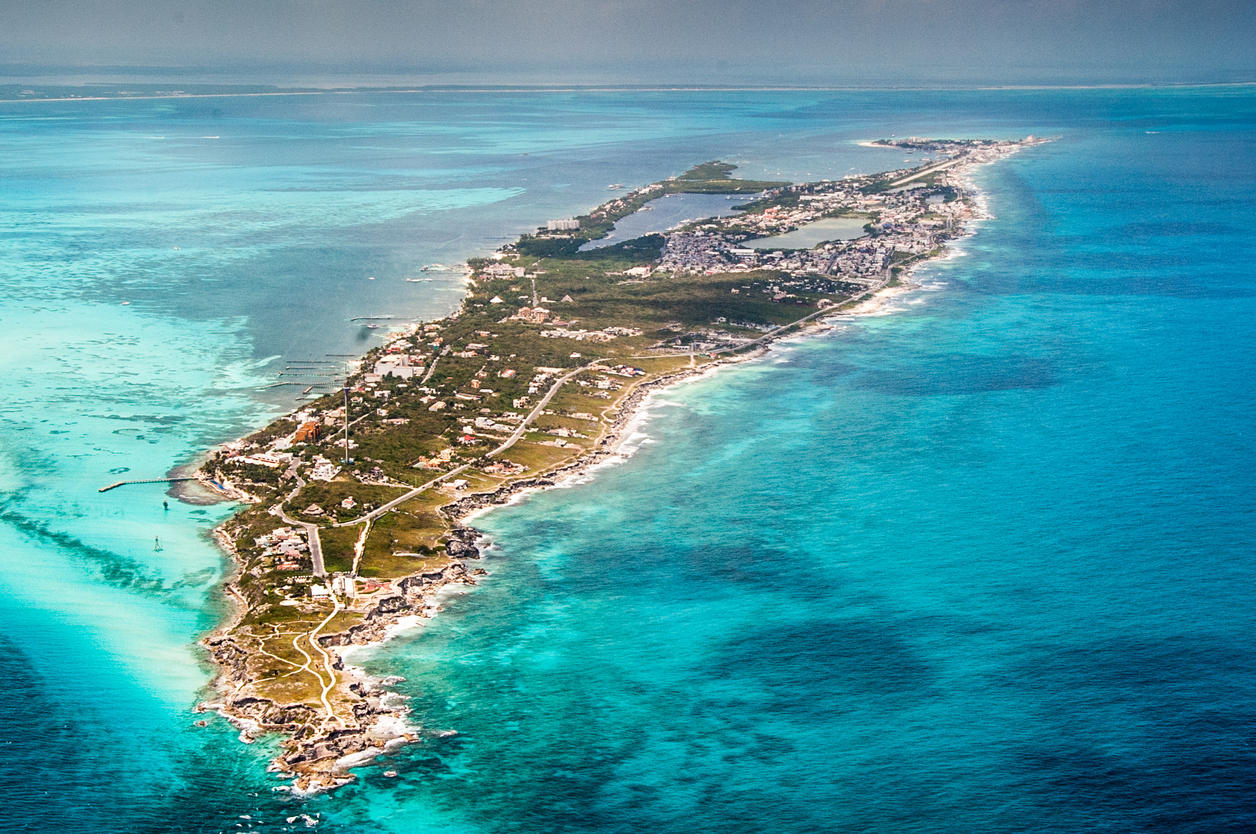 Another tiny, appealing island – and still laid back even though rather more developed for tourism – the “Isle of Women” (so named by the Spanish conquistadors because of the many ancient images of goddesses they found here, as the island was sacred to the Mayan goddess of medicine and childbirth Ixchel). If you’re not staying at one of the various resorts and guesthouses here, it’s an easy-peasy day jaunt by ferry right near Cancún to putter around on scooters and golf carts and enjoy a wide range of seafood and other restaurants; beaches such as Playa Norte; and diving/snorkelling at the coral reefs and the nine-year-old Cancún Underwater Museum of submarine sculpture. 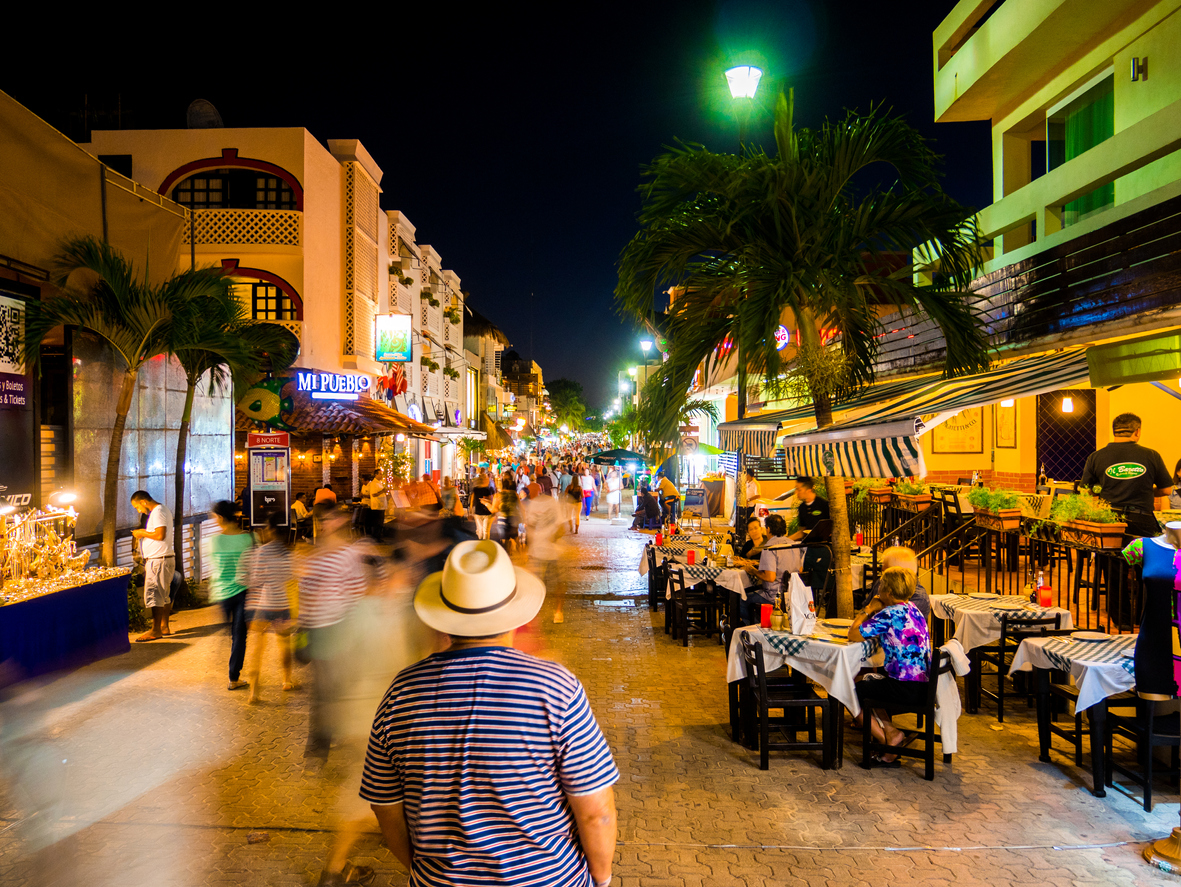 The other main tourist-oriented city on the Riviera Maya, two hours south of Cancún, is another fishing village turned one of Mexico’s fastest growing cities (pop. 252,000), as well as the backdrop for high-profile international golf tournaments and cultural festivals including jazz, film, and electronic dance music. The main tourist thoroughfare is Quinta Avenida (above), lined as well as its surrounding streets with restaurants, bars/clubs (including one of my favourite karaoke haunts!), and shops from humble to ultra-upmarket, and there’s also a wide variety of accommodation – again, from rock-bottom-budget to très chic.

The phrase “life-changing” has become a vastly and tiresomely overhyped cliché, but “Secret River”, a 12-km (7½-mi.) network of underground rivers – discovered just ten years ago – is a strong contender in that department. You don wetsuits and wade/paddle (you don’t need to know how to swim) for a guided tour through a fantastical fantastical world of stalactites, stalagmites, and assorted wonders. 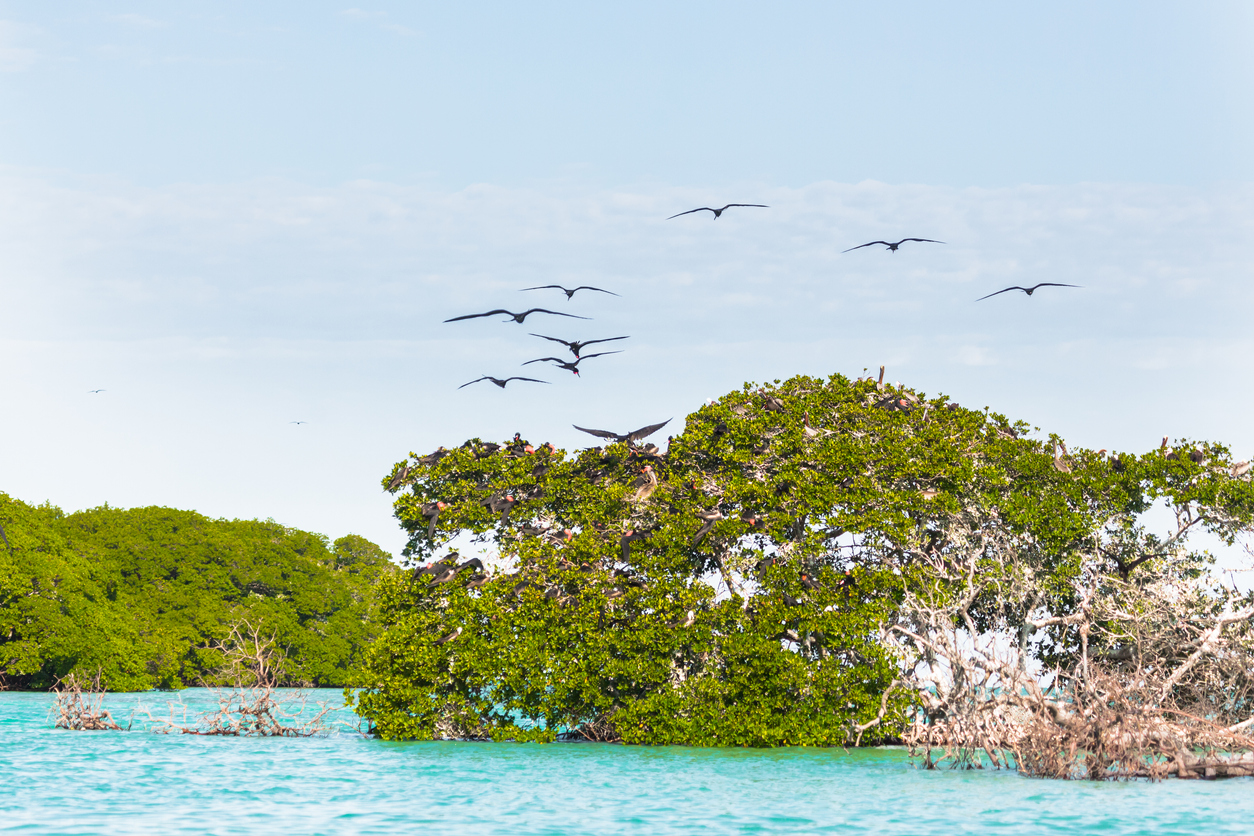 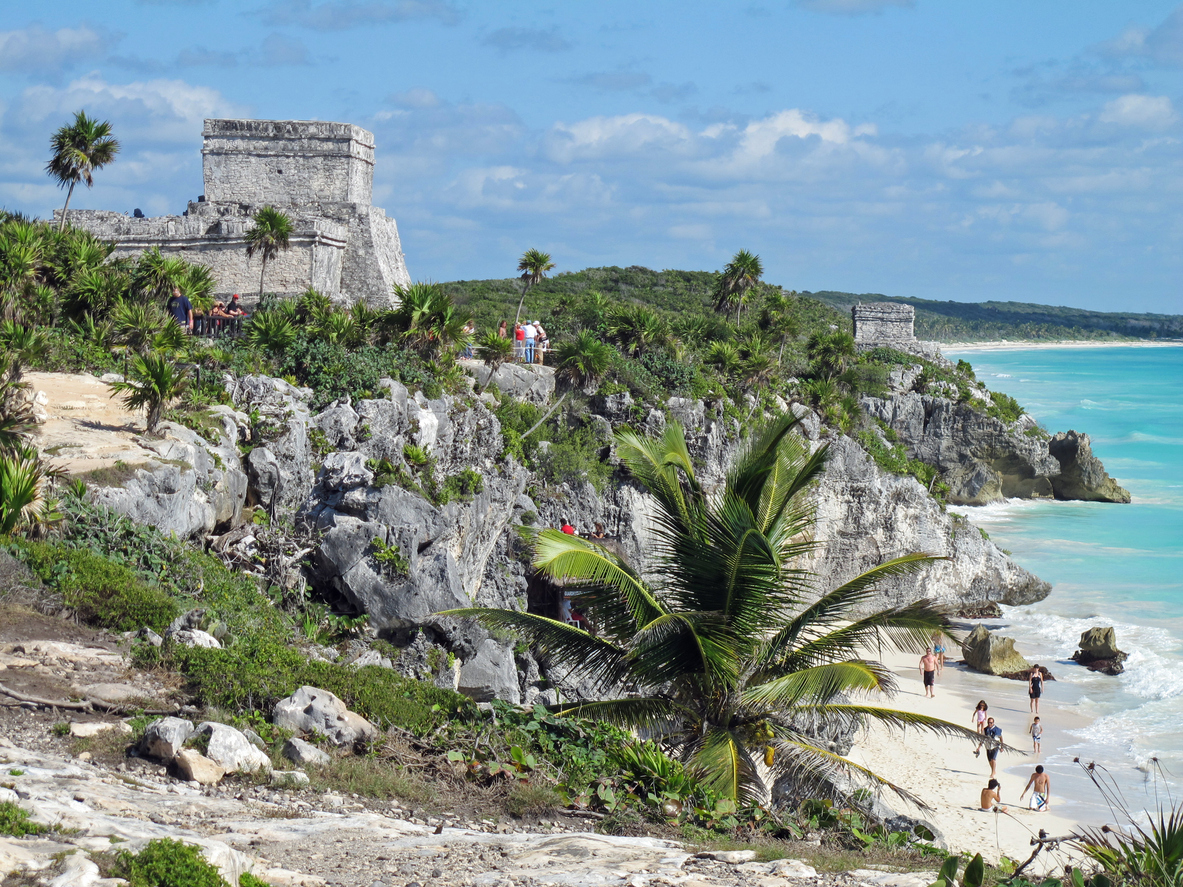 QR’s third largest tourism magnet features some 70, mostly rustic boutique hotels along a lovely stretch of sand, with attendant restaurants and drinking spots, but the star of the show for many is Tulum Ruinas, a compact Mayan archaeological site that’s truly unique because it’s the only one on the sea – offering a “twofer” package of ruins plus a nice little dip off the beach below. Once the seaport for Cobá (see above), Tulum was one of the last cities built by the Mayans – at its height between the 13th and 15th centuries – and because it’s both so picturesque and accessible, it’s also become immensely popular. And that means overcrowded, especially since it’s a favourite cruise-ship shore excursion – furthermore meaning some of the once easily accessible temples are now sadly roped off.

And parenthetically, if Tulum and Cobá leave you hungry for more Mayan archaeology, there are myriad excursions (plus easy self-drive access) from many points along this coast to sites such as Chichén Itzá, Uxmal, and various others.

This sprawling Mexican-cultural-themed and eco-park near Playa del Carmen, named after and including part of the adjacent Xcaret Mayan ruins. There’s a wealth of recreated architecture from various regions of Mexico – of course with an emphasis on the Yucatán and Mayan culture – as well as myriad demonstrations and shows, such as pre-Columbian and other folkoric dancing; the famous “bird men” of Papantla; dazzling horsemanship; and perhaps most impressive of all, a “Mexico Espectacular” show starring dramatic portrayal of ancient Mayan culture, including recreations of the highly kinetic ball games whose courts are seen in many of the archaeological ruins. There are also plenty of nature-related activities, such as swimming, snorkelling, Snuba, animal exhibits, manatee spotting, and swimming with dolphins and rays.

From the same company that owns Xcaret, this 35-year-old aquatic/eco park just north of Tulum is also associated with a small adjoining archaeological site but is a bit more simple and straightforward. It’s built around a natural inlet and lagoon in which seawater mixes with currents from underground springs, and visitors get to swim and snorkel amid hundreds of species of tropical fish and flora, grottoes and caves, as well as visit a sea turtle reserve and jump off a five-metre (more than 16-foot) cliff into the water. The park takes sustainability and eco-friendliness seriously, and has been so certified by reputable international authorities.

And believe it or not, there’s actually plenty more still to this small but attraction-rich Mexican state, so for more details, check out VisitMexico.com.