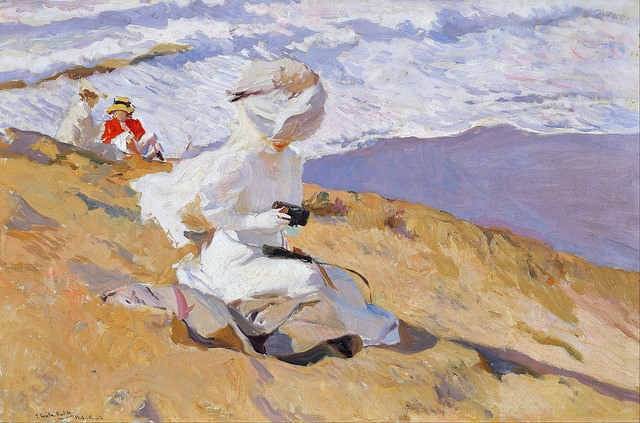 The first time that London was illuminated with the magical light of Valencian painter Joaquín Sorolla (1863-1923), shown at the Grafton Galleries, it catapulted him to world fame as “the best living painter in the world”.  It was the year 1908 and this exhibition composed of 300 paintings marked a turning point in his professional career as well as his personal life. Not because of the success of the show itself, which did not have such a spectacular reception, but because of everything that resulted – such as founder of the Hispanic Society of America bought several of his works, proposed an aggrandising tour of the United States (he ended up spending some five months there, and President William Howard Taft ended up sitting for a portrait) and, a little later, recruited him to paint a giant mural that adorned the headquarters of the aforementioned society in New York City.

And thus Sorolla’s career really took off – only to lapse into (relative) obscurity after his death as his reputation became overshadowed by other Spanish artists and even many of his 19th-century/early-20th-century Impressionist artists. But in more recent years his stock has been on the rise, as with a 2009 blockbuster exbibition at Madrid‘s Prado Museum, and his legacy has increasingly been achieving its rightful place among those of Spain’s greatest artists.


And now comes another reintroduction of the luminous brushstrokes of this masterful Valencian to the British and international public thanks to National Gallery‘s “Sorolla: Spanish Master of Light”, running through 7 July, showcasing 58 of his most emblematic paintings as well as a number of lesser known works – many on loan from other museums or private collections. He’s best known for his vivid seaside scenes (top) and seascapes, garden views, and bathing scenes, but here you’ll also find portraits, landscapes, and scenes from daily life, often with an eye for social themes.


Iberia is a co-sponsor of this exhibition, and of course being especially dedicated to Spanish art and culture is continuously supporting these kinds of events, as well as aiming to spread the word among the public about other events of this kind, whether at home or abroad. Thus, #TalentOnboard was born some time ago, our particular way of encouraging culture in a Spanish but also diverse way.

It also supports the Madrid Design Festival and the Mercedes-Benz Fashion Week Madrid and is fully onboard at the PLATINO Awards of Ibero-American cinema, reinforcing the centuries-old cultural links between Latin America and Spain. There’s more: when for 2 1/2 months in 2018 the art collective Madrid Meninas Gallery put up 80 life-size fiberglass sculptures of meninas – the princess figure in Spanish Old Master Diego Velázquez’ famous painting in the Prado – three were commissioned by the airline; this year it also joined the Prado’s bicentennial observance, PhotoEspaña, and the second edition of the Women’s Film Festival.

And the work will go on, all in enthusiastic support of Spanish culture!