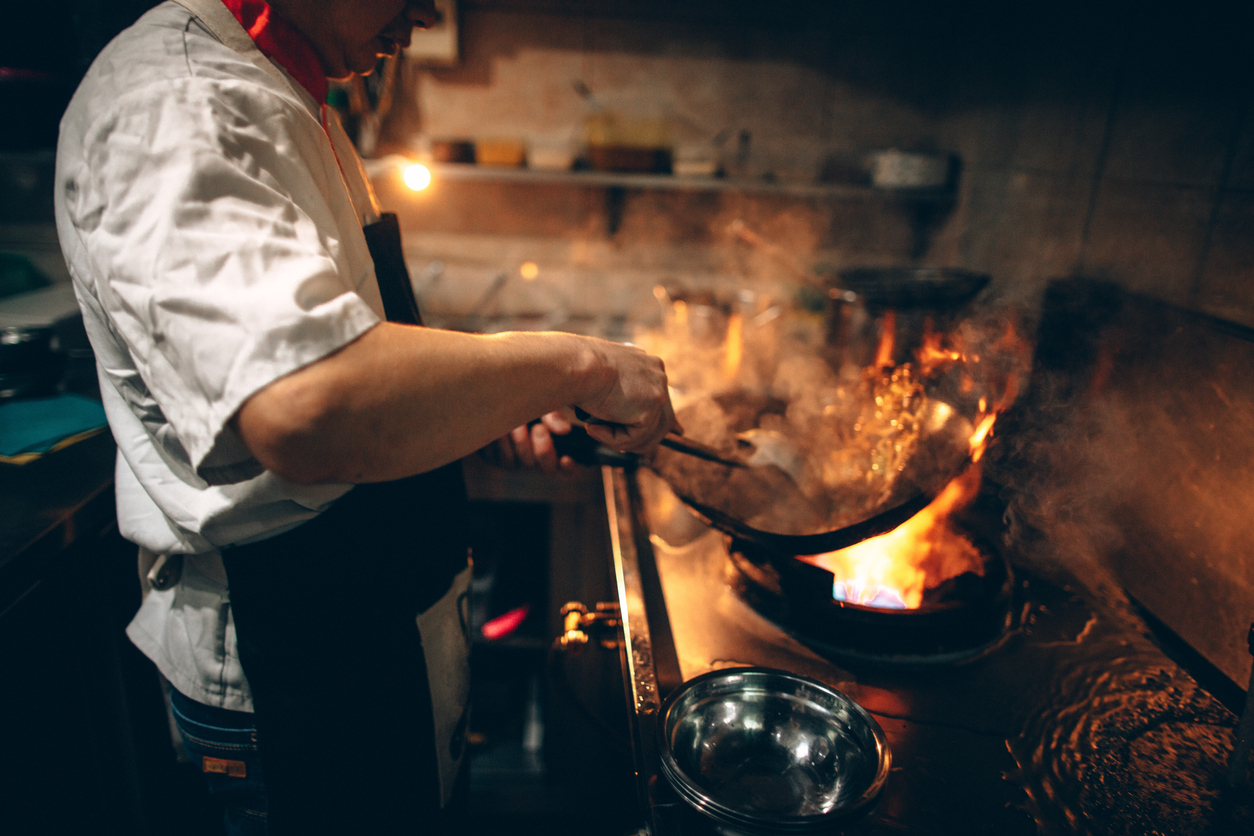 It’s become a truism that in some countries at least there seems to be a Chinese restaurant in virtually every town of any size. But oftentimes what is served outside China tends to be Cantonese or northern-Chinese cuisine, with one or two others such as Sichuan (Szechan) becoming increasingly popular. But since “the Middle Kingdom” is so huge and diverse (despite the nationwide overlay of northern Han culture), that especially if you’re planning to travel there it’s worth taking a look at its various regional cuisines – eight of which have been especially lauded as the “Eight Culinary Traditions“. Chopsticks up, and get ready to wok and roll! 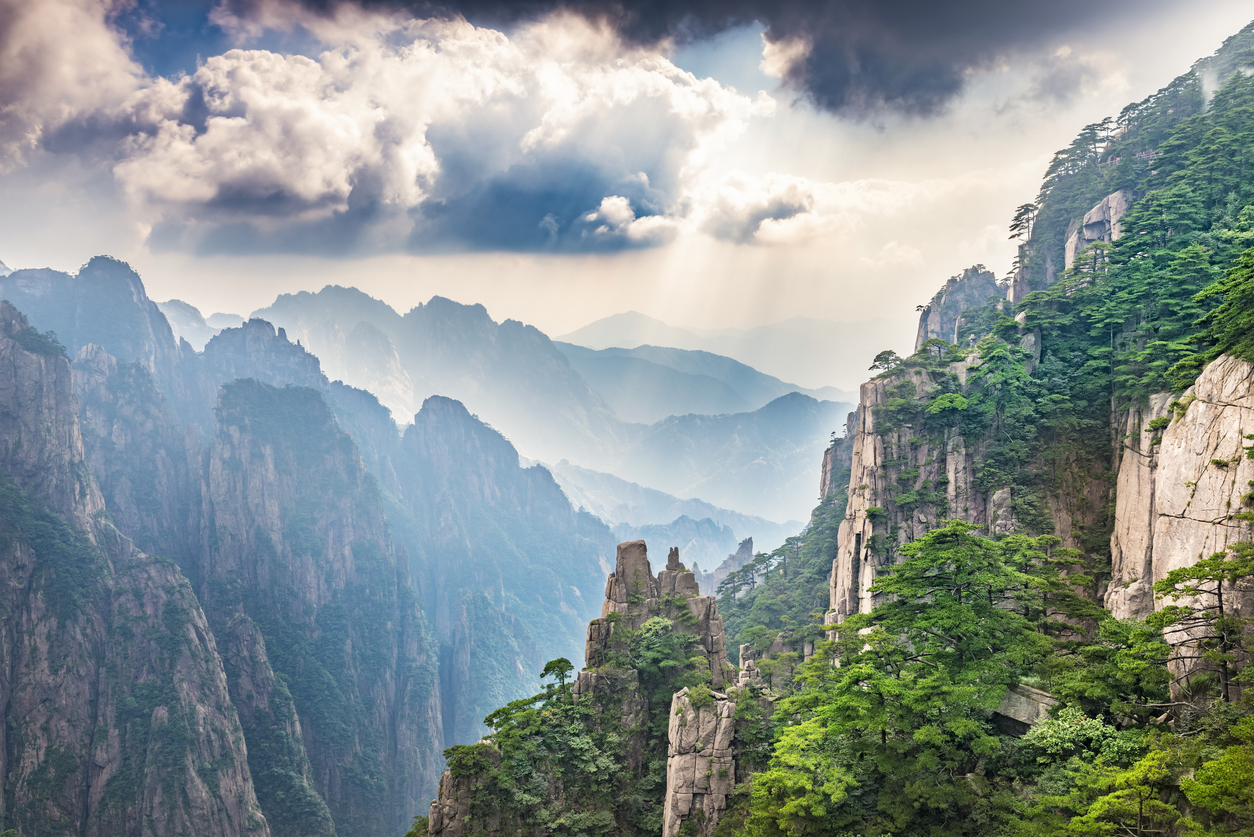 Some five hours west of Shanghai lies the mountainous region of Huangshan, known for its hot springs and spectacular scenery, including pine forests and striking granite peaks, a UNESCO World Heritage Site oft depicted in traditional Chinese painting.  It’s also home to one of the Eight Culinary Traditions, known for its use of wild herbs, simplicity of techniques (more braising and stewing, less frying and stir frying) and heavy use of tofu (in fact, it’s said tofu was invented here). Typical dishes include chop suey, egg dumplings, roast goose and duck, potato cellophane noodles, chestnut stewed chicken, and stinky (fermented) tofu (though I confess that personally, just a whiff of this makes me ill).

Another of the Eight Culinary Traditions, also known as Yue cuisine, the style of China’s southern Guandong (Canton) province and adjacent Hong Kong is of course much better known throughout the world. It uses a lot of stir frying and steaming, and aims for balanced flavours and non-greasy consistency, with fresh, high-quality ingredients and subtle, judicious use of dry spices such as anise, five-spice powder, garlic, ginger, and pepper; soy sauce and sesame, meanwhile, are more common. Cantonese-style fried rice (above), chow mein, and sweet-and-sour pork/spare ribs are the best known classics, while other prominent dishes include congee (rice porridge) with pork and “hundred-year-old” (preserved) eggs; stir-fried clams with black bean sauce; steamed fish with ginger and soy; and beef and broccoli in oyster sauce. 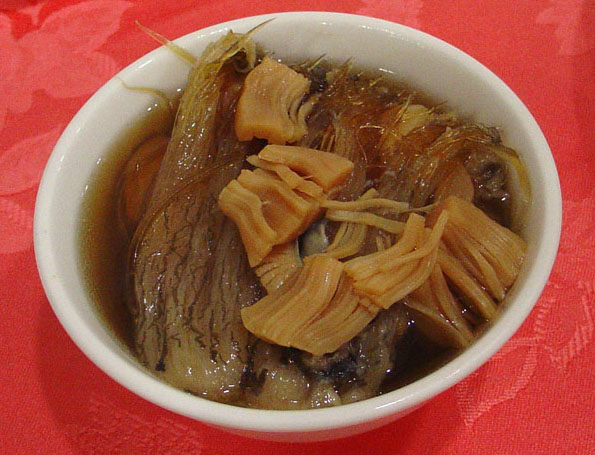 Also known as Min or Hokkien cuisine, this is the cookery of the mountainous southern province roughly halfway between Shanghai and Hong Kong and right across the South China Sea from Taiwan. It’s light but savoury, with an emphasis on highlighting the flavours of its ingredients (with seafood, mushrooms, peanuts, and bamboo shoots figuring prominently) instead of drowning them in spices and heavy sauces (although fermented fish sauce is fairly common). Like Anhui, Fujian also uses a lot of braising and stewing, as well as boiling and steaming, with standouts such as bat kut teh (a soup of pork ribs in a broth of herbs and spices including garlic, star anise, cinnamon, and cloves, eaten with rice or noodles), “Eastern Wall Dragon Pearls” (longan fruit with meat fillings), pepper steak (this is where the popular overseas-Chinese dish hails from, in fact), min sheng guo (stir-fried raw peanuts), and oyster-stuffed omelette. The most elaborate of all is the colourfully named “Buddha Jumps Over the Wall” (above), with around 30 ingredients, including some standard ones (chicken breast, duck, dried scallops, mushrooms, pig’s trotters) but others decidedly more exotice (shark’s fin, abalone, sea slug, pigeon eggs). 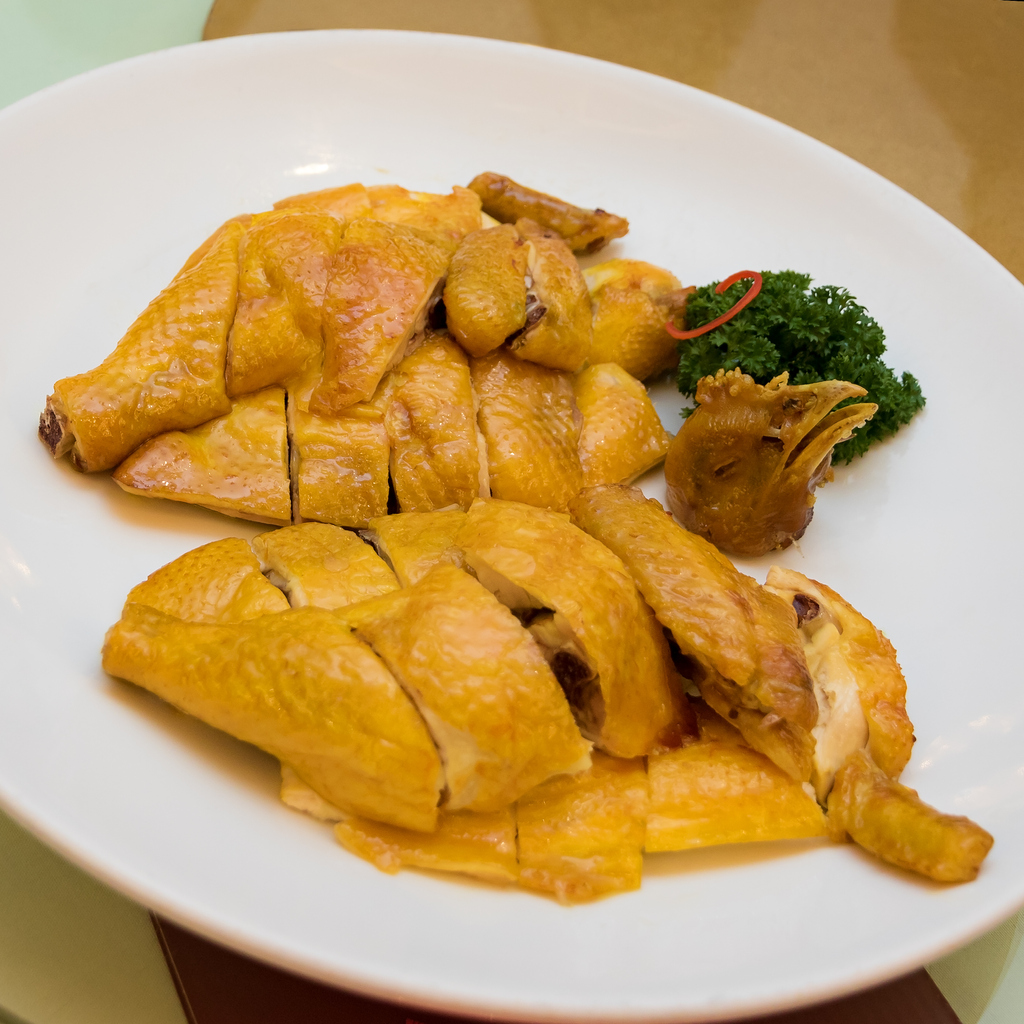 This southern-Chinese cuisine is that of the eponymous Hakka people, a Han Chinese subgroup with a distinct language and customs, and spread through the provinces of Fujian, Guandong, Guanxi, Guizhou, Hainan, Hunan, Jiangxi, Sichuan, and Zhejiang; I also recall visiting a walled Hakka village in Hong Kong’s New Territories and being bemused by the old ladies in their wide-brimmed tasselled hats. Their cookery (also known as Kuh-chia cuisine) is just as particular, relying especially on stewed, braised, roast meats as well as preserved vegetables, steamed and braised. Common dishes include steamed minced pork with preserved vegetables; braised pork with salted vegetables; steamed buns stuffed with sweetened black-eyed pea paste, peanuts, or preserved radish; and perhaps most famously, salt baked chicken (either cooked in brine or in a salt crust). 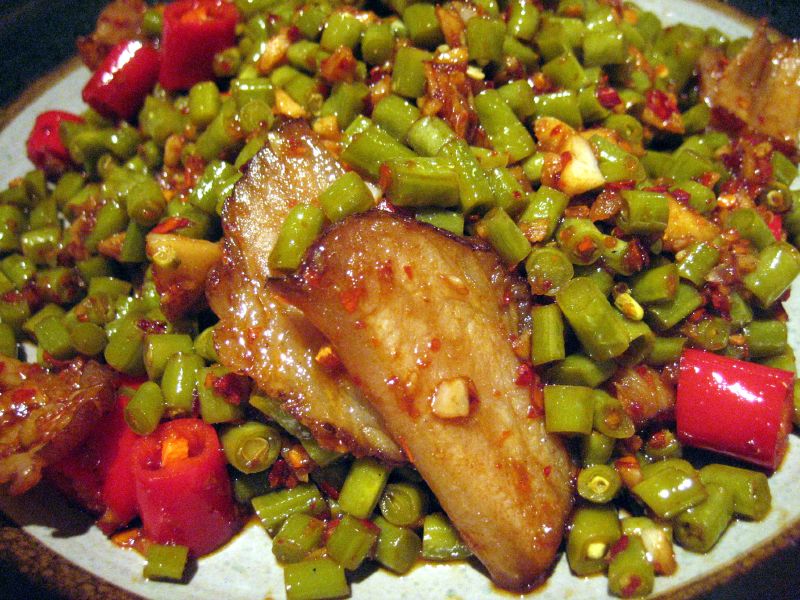 One of the Eight Culinary Traditions hailing from the west of south-central China’s Hunan province, this one’s famous for its deep colours, oiliness, and especially its hot/spicy flavours (chili peppers and garlic being common ingredients, as are shallots), with the most used cooking techniques braising, frying, pot-roasting, stewing, and – rather more than other Chinese cuisines – smoking. Typical dishes: Dong’an chicken (cold and parboiled, with rice vinegar, chili peppers, ground pepper, scallions, and ginger); cured ham with cowpeas (above),  steamed fish head with diced red hot peppers; and orange beef and chicken (citrus crops are widely grown here).

This member of the Eight Culinary Traditions comes from coastal Jiangsu province – one of the smallest but also the most densely populated in the country, just north of Shanghai and with Nanjing as its capital (other well known cities here include Suzhou and Yangzhou). Emphasizing lightness, freshness, seafood, seasonality, and soft textures, some of its common ingredients include bamboo shoots,  mushrooms, and tea leaves. You’ll see a fair amount of  braising, stewing, and stir-frying, and another distinctive feature in a number of Su dishes is sweetness, with added sugar. Check these out: freshwater shrimp with bitter melon; carp soup; “squirrel-shape” Mandarin fish (above); Jinling salted dried duck; clear crab-shell meatballs; and water melon chicken.

Yet another of the Eight Culinary Traditions and also known as Lu cuisine, this one’s from more northern Shandong province, one of China’s most populous and prosperous, its capital Jinan as little as 90 minutes by train from Beijing/Peking. Known for its rich flavours, freshness, and light aroma, it relies especially on boiling, quick frying (with or without corn flour), roasting, and stewing, and has been highly influential on other cuisines in China. Notable ingredients include seafood, sweet peanuts, starchy maize, vinegar, small grains, and lots of salt, and among its signature dishes you’ll find fried carp with sweet and sour sauce; braised spare ribs with gluten (above); sweet potato with caramelised sugar; stir-fried pigs’ kidneys; braised sea cucumber with scallions; “Eight Treasures” stuffed chicken in milk soup; and honey-crystallised fruit. 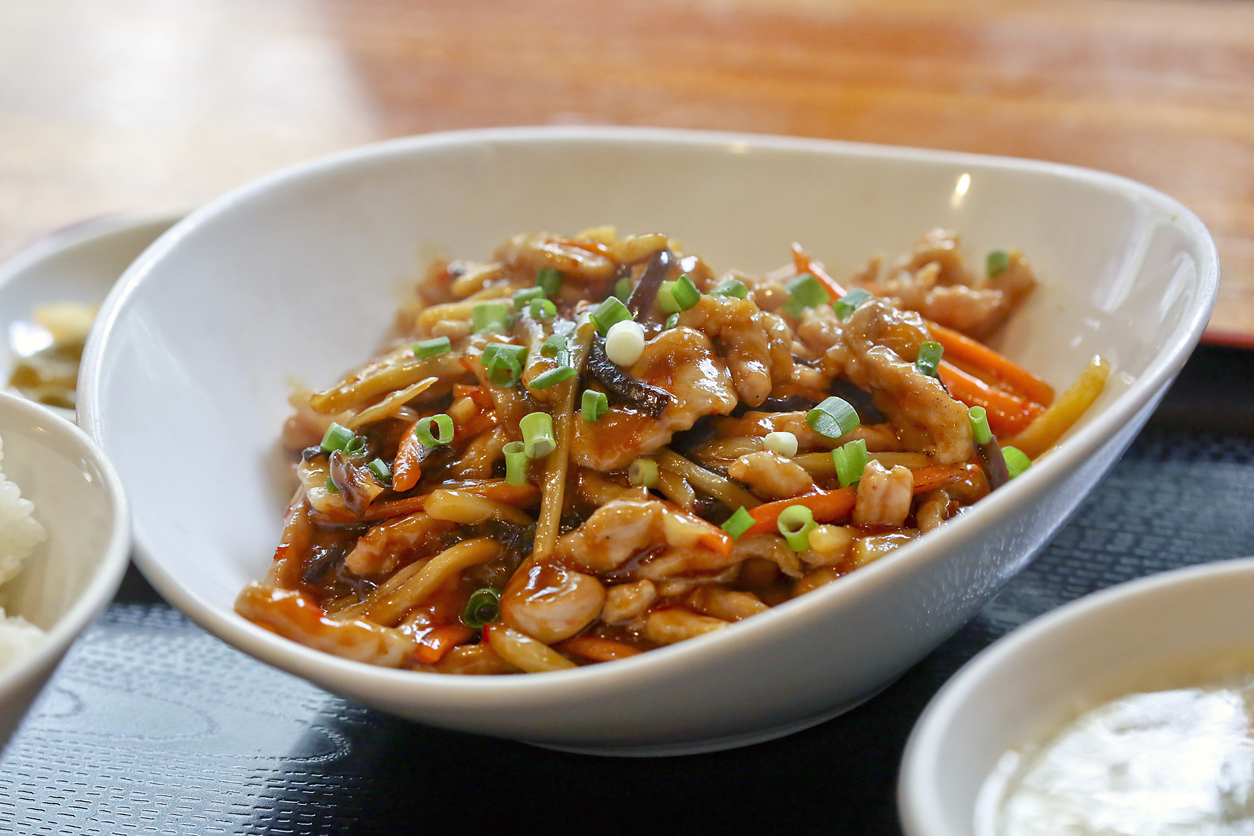 One of the Eight Culinary Traditions that’s become best known beyond the country’s borders (kung pao chicken/beef and Mapo tofu ring a bell?), it originates in the eponymous province of south central China and along with Hunan is one of the spiciest palates on this list, using a lot of garlic and chili peppers/oil, with broad bean chili paste being a common ingredient (there’s even a specific Sichuan pepper). The most popular meat is pork, though beef and even rabbit are also widely used, along with various pickled, salted, and dried foods. Among other Sichuan specialities: twice-cooked pork; tea-smoked duck (not spicy, for a change); dandan noodles; chili oil wontons; and shredded pork in garlic sauce (above).

As with the region itself, the food of Himalayan Tibet is fairly distinctive due to its landlocked, high-altitude local conditions and Buddhist culture, with counting among common elements barley (tsampa porridge is a particularly important staple), butter (especially yak butter), dumplings, goat, mutton, noodles, yak, and yoghurt; fish is generally not used. Among the menu standouts are momo steamed dumplings;  yak butter tea (above, considered the Tibetan national beverage); gyurma blood sausage; stir-fried mutton with green beans; cheser mog (rice with melted yak butter, brown sugar, raisins, and salt); and laping (noodles with mung beans and a sauce of red chili, cilantro, and green onions).

Another culinary outlier lies out in China’s far west, an enormous region that is mostly Muslim, with the Uyghur being the predominant ethnic group (others include Dongxiang, Kazakh, and Kyrghyz). Apart from the standard chicken and beef, mutton is also fairly common out here (you’ll even find camel dishes), and the general palate starts to more resemble Central Asia, such as in wide use of kebabs (especially lamb and beef). On my last visit to Beijing, one of my most memorable meals was in a Xinjiang restaurant, and I also just loved the Uyghur fare on Xi’an‘s “Muslim street”). A few notables: nan sesame flatbread; spicy chicken stew with flat noodles; Dongxiang noodles boiled in a thick mutton soup; Uyghur polu (above, steamed rice with carrots and mutton or chicken, sometimes with raisins and dried apricots); and Uyghur walnut cakes.

Finally, it’s back to the coastal south for the last of the Eight Culinary Traditions. Just below Shanghai, its provincial capital Hangzhou, the cooking style here is mellow and unspicy, often relying a good deal on seafood and braising, sauteeing, and stewing. And here are a few classics: shrimp cooked with Longjing tea; carp in vinegar sauce; fried cuttlefish rolls; Dongpo pork (fried pork belly stewed in soy sauce and wine); beggar’s chicken (stuffed with various ingredients, then cooked wrapped in clay and lotus leaves); Ningbo rice balls and rice cakes, sometimes stuffed with black-sesame or red-bean paste.