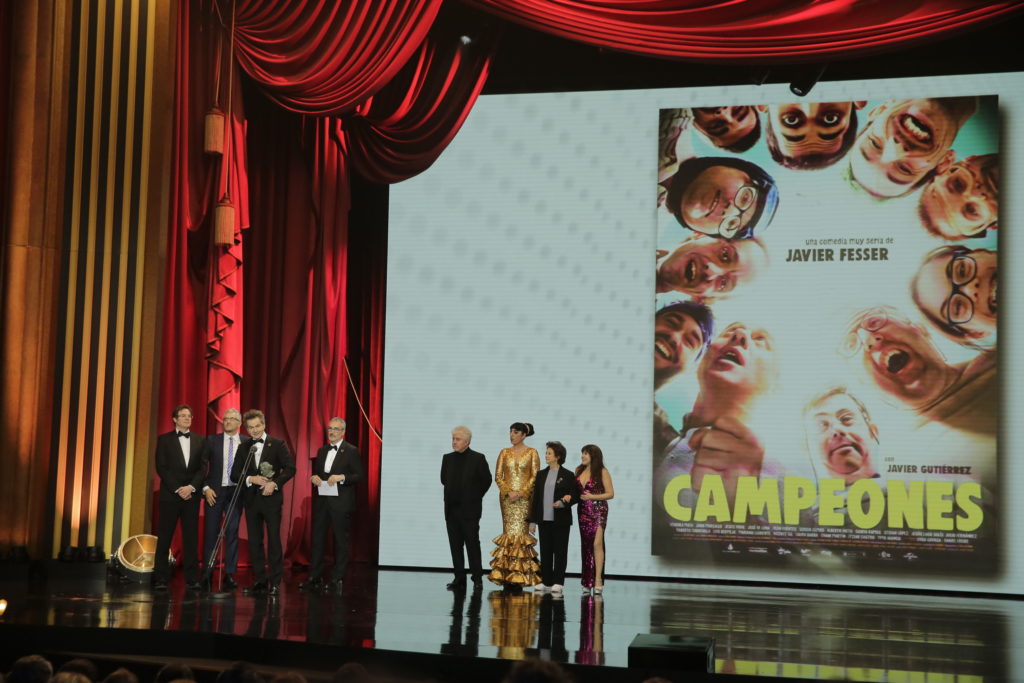 
This past Saturday in Seville, the Academy of the Cinema Arts and Sciences of Spain held its 33rd Premios Goya gala awards (named after one of the country’s most famous painters, depicted in the prize statue) – just the second time in its history the academy has ventured away from Madrid for the occasion. These Goyas honoured the best of 2018 in Spanish cinema, which has been marked by masterpieces for much of the late 20th century but especially in recent decades evolved into one of Europe’s – and indeed, the world’s – most dynamic and distinguished.

So once again: the sobres, please!

Last year, even as a goodly number of women made the ranks of nominees and winners (including best director), many Goya attendees flashed red fans emblazoned with #+MUJERES (MORE WOMEN) – even though this year still turned out disappointing, with just 32 females nominated as against 89 men. And this year, the fans came out again, this time reading #NIUNAMENOS (NOT ONE FEWER), against domestic violence, which despite Spain’s largely progressive atmosphere remains a problem among the segment of society that’s still stubbornly – and sometimes violently – machista.

The three-hour show was emceed by Catalan actress/comedian Silvia Abril and her talk-show-host husband Andreu Buenafuente, though I must say as a former screenwriter myself that the writing on their monologue did strike me as a bit lame, especially the jokes. But on the other hand, there was nary a teleprompter in sight, so colour me impressed. Also, Buenafuente’s black-and-white set piece doing a shtick as Groucho Marx was cute (if a bit dated), as was Abril’s “wardrobe malfunction” (having her entire gown pulled off!), followed by her husband’s disrobing in solidarity, just before presenting Best Costume Design. Other highlights included another Catalan, singer Rosalía, bringing down the house with the opening number, a soulful rendition (above) of Me Quedo Contigo (I’ll Stay With You), a classic of nouvel flamenco, which interestingly took hold in Barcelona of all places beginning in the 1970s.

Plus in 2019 the night took a new turn toward diversity in the form of the Best Picture award for Campeones (Champions) – revolving around a basketball team of the mentally challenged (Down syndrome and the like) – and Best First-Time Director to Arrantxa Echevarría for Carmen & Lola, about two Roma (gypsy) girls in love – a solid twofer on the social-issues front.

There were 29 pretty diverse categories – wardrobe, cinematography, soundtrack, special effects, and so on – so obviously I can’t list them all, nor give the blow-by-blow, but the five top awards of the night were:

This is the story of Marco, a trainer for a top Spanish basketball team (and Spain is by the way a European hoops powerhouse) who has hit rock bottom – after a huge fight with a superior he’s a car accident whilst drink driving. This leads to the loss of his job and girlfriend, and being sentenced to community service in the form of coaching a team made up of inexperienced – and mentally challenged – young people. But what starts out as a hell for Marco turns into a gift: an emotional adventure which changes his life forever. Irresitible catnip to any progressive film academy, eh? In anycase, the film got 11 nominations and scored two other Goyas: best new actor Jesús Vidal and best original song.

A 37-year-old native of Madrid, Sorogoyen began his directing career with the 2008 TV series Impares (Singles), about dozens of characters’ experiences with an online dating site, and the romantic comedy 8 Citas (8 Dates) that same year. This time out, he won his first Goyas by helming a riveting political thriller about corruption in Spanish politics – and shared the screenplay award, by the way, with co-writer Isabel Peña.


This 63-year-old Valencian is a veteran TV/film actress who began her career in the early 1990s, and has included roles in various genres of films (including, most familiarly to international audiences Pedro Almodóvar‘s 2011 The Skin I Live In. In La Enfermedad del Domingo (Sunday’s Sickness), she plays a woman faced with a reunion requested by the daughter she abandoned 35 years ago – and who has a proposal that will present her with the most important decision of her life. Hers was this film’s sole nomination.


A 51-year-old from Málaga, de la Torre started his acting career with the 1993-94 TV comedy series Lleno, Por Favor (Fill ‘Er Up, Please) and 1994 film Los Peores Años de Nuestra Vida (The Worst Years of Our Lives). He’s another Almodóvar alum, and might be remembered by international audiences from the 2013 screwball comedy Los Amantes Pasajeros (I’m So Excited). Here in El Reino (The Kingdom) he takes a decidedly different turn as a Spanish politician caught up in a corruption scandal.

Finally, it’s also well worth taking a look at the four other outstanding Best Picture nominees:

Actually, more than a twofer, this one’s a “three-fer” of sorts: 1. a coming-of-age story about a pair of 16-year-old girls from 2. Spain’s marginalised Roma (gypsy) community who meet at a market and begin 3. a lesbian affair. An even more powerful dose of catnip than Campeones (above) – though apparently not quite enough to put it over the top. Its eight nominations, though, did net it Best First Time Director for Arantxa Echevarría (as noted above) and best supporting actress Carolina Yuste.

In this political thriller, Antonio de la Torre (winner of Best Actor) plays Manuel, a senior politician in one of Spain’s 17 autonomous regions who’s on the rise and about to break into national politics, when he’s caught up in a corruption scandal that leads to him being expelled from “the kingdom”. Manuel is then forced to fight for his reputation against the politicians and the media. This was actually the most awarded film of the evening, from 13 nominations receiving not just Best Director, Best Original Screenplay, and Best Actor, but four others, as well: Best Supporting Actor, Best Cinematography, Best Original Music, and Best Sound.

Back to the Roma: This time it’s two brothers, one in jail for drug trafficking and the other in the navy. When the first gets out of jail and the second returns from an overseas posting, they reunite in their hometown, San Fernando in the Andalusian province of Cádiz, sparking memories of their father’s violent murder when they were kids. Much of the plot revolves around the ex-con’s efforts to reconnect with his wife and three daughters as well as his brother, as well as move beyond the trauma of a childhood without a father; furthermore it provides a fascinating window into life in the city’s La Casería neighbourhood.  It also received one other nomination, for Best Director.

This tense crime thriller is another outing featuring the Oscar-winning, reigning royalty of Spanish actordom (and therefore this is the only one of the Goyas lineup currently receiving international distribution): Penélope Cruz and Javier Bardem (nominated here for Best Actor/Actress, as they were in 2018 for Loving Pablo). She plays a woman returning from Argentina to her hometown Torrelaguna (45 minutes north of Madrid) with her son and daughter for her little sister’s wedding. When her daughter disappears, she finds someone has left a message on her bed about a similar kidnapping committed here years ago and making it clear: don’t call the cops or the girl will be killed. She doesn’t even tell her family, but her old flame Alejandro (Bardem) comes to her aid, and they confront their past together even as they race to find the girl – whom they suspect been taken by someone in the family. In addition to Best Director and Best Actor/Actress, this was nominated for five others, including Best Director and Best Original Screenplay, but sadly wasn’t able to nab any Franciscos.